People are Moving 14% Less in Boston

If you live in Boston, you are probably no stranger to moving truck permits. Aside from packing everything in boxes and contacting the movers, you also need to apply for a moving truck permit and post the “no-parking” sign so you don’t have to stack up everything on the corner of your street on the moving day.

As one of the major cities hit hard by COVID-19, Boston saw a huge decline in renter demand. In our report this year, we examined how the pandemic has affected the Boston housing market, specifically by looking at the number of moving truck permits issued.

The number of moving truck permits issued by the city is down 14.7% this year 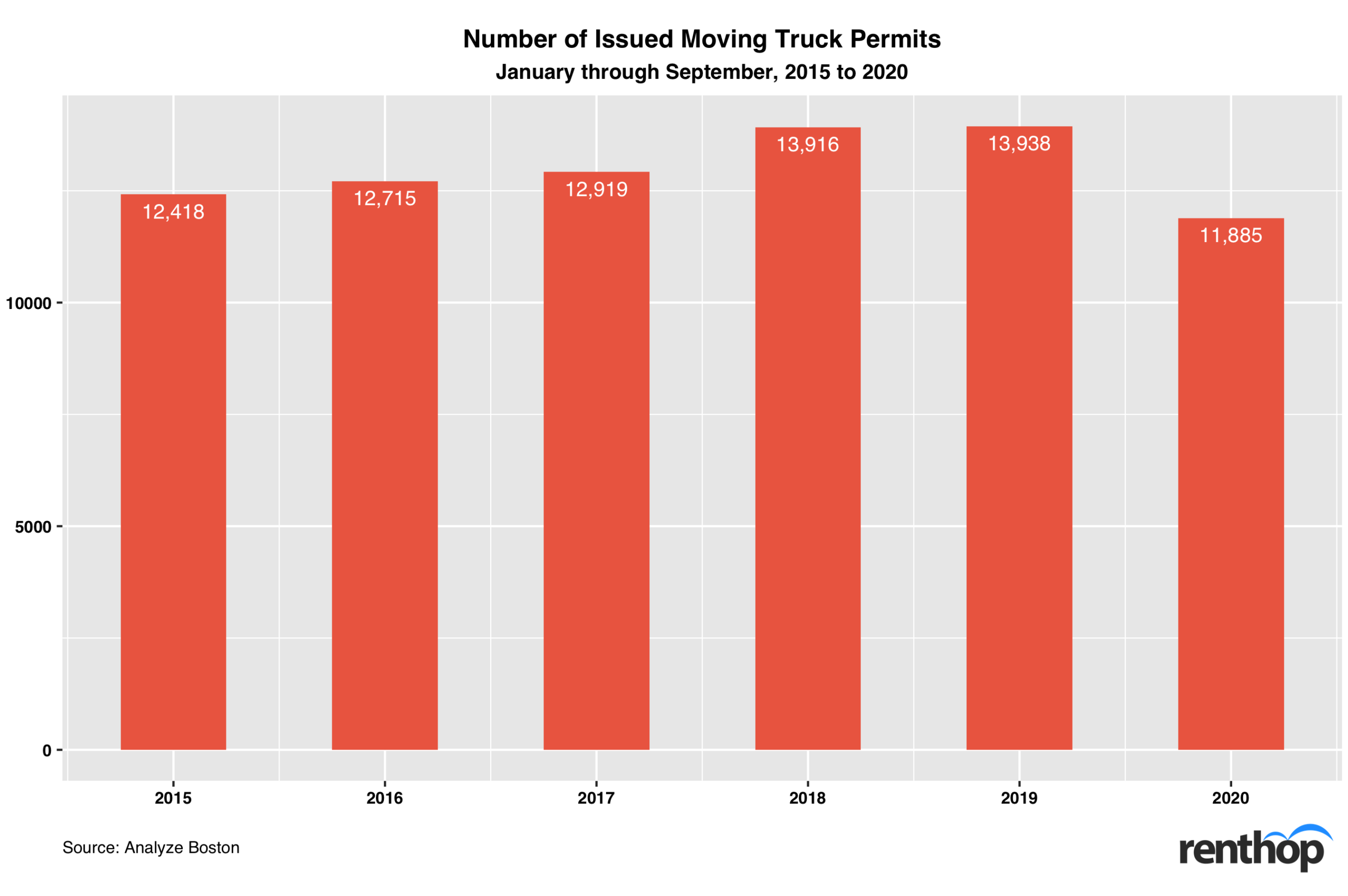 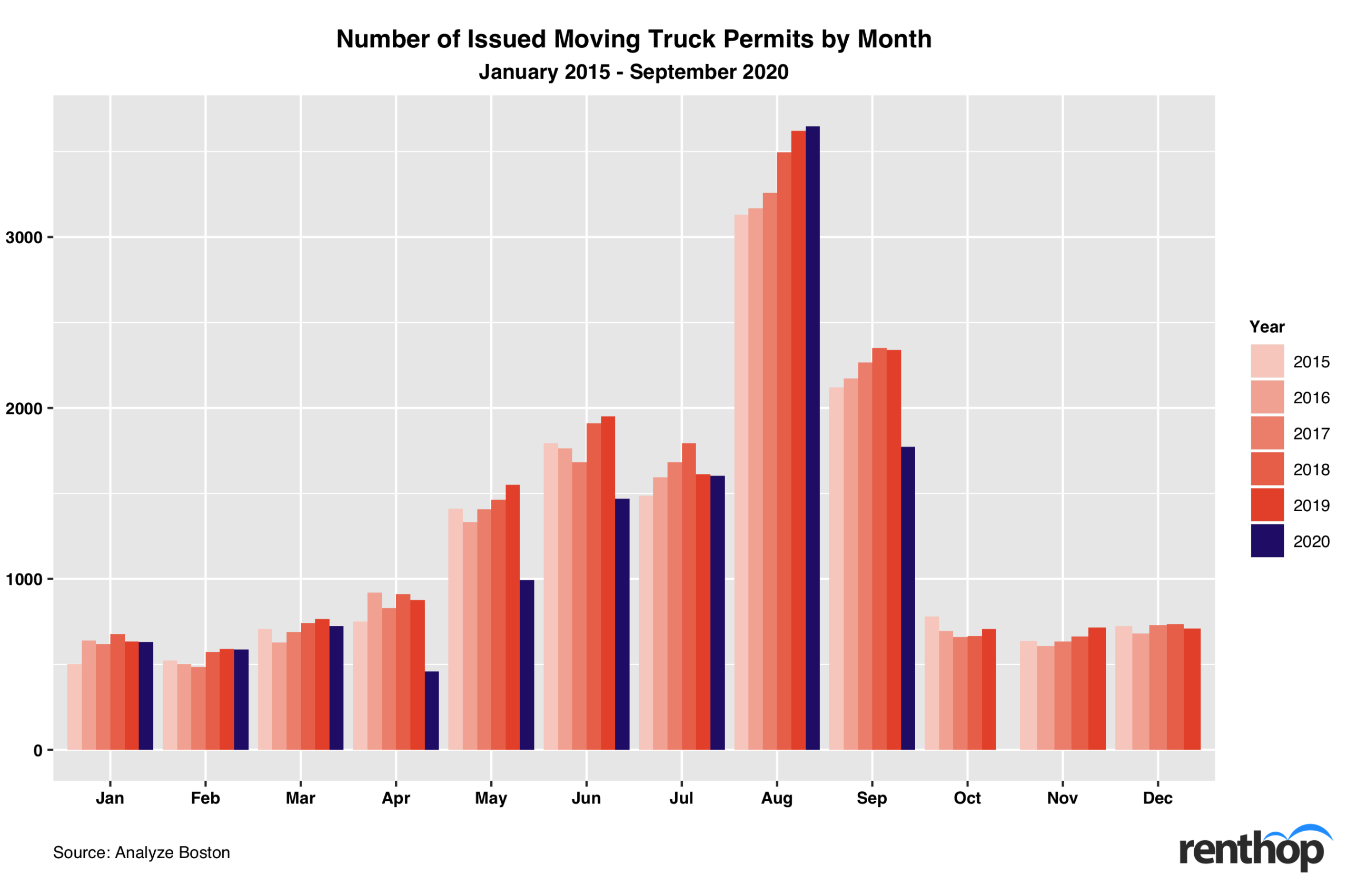 The first confirmed case of COVID-19 in the U.S. was reported on January 20, 2020, and on February 1, Boston announced its first confirmed case. As cases soared, the city entered the lockdown in mid-March. Moving came to a halt in April, with the total number of moving truck permits issued fell to 458, the lowest since January 2015 and 47.7% fewer than April 2019. The number continued to stay low through June, putting downward pressure on rents. In Boston, one-bedroom median rent was down in 2.6% year-over-year in June 2020, according to RentHop data.

While August topped all previous months in terms of the number of moving truck permits issued in recent years, mostly because of the college move-ins (for most colleges, the move-ins were twice as long), remember, many students moved into dorms, not rental properties, and the surge might not fully represent the demand in the Boston rental market. Once the move-in madness passed, the rental demand could fall again. Based on the data, it looks like September 2020 is on track to be the worst month of September compared to previous ones. The pandemic has driven down the rental demand across Boston – one-bedroom median rent currently sits at $2,350, 6.0% lower than last year.

While overall fewer moving truck permits have been issued so far in 2020, some areas saw more significant drops compared to others. The map below highlights Boston zip codes as well as the number of permits issued in 2020, the year-over-year change, and the difference from the yearly average (2015- 2019). The darker the shades, the fewer permits were issued compared to 2019. 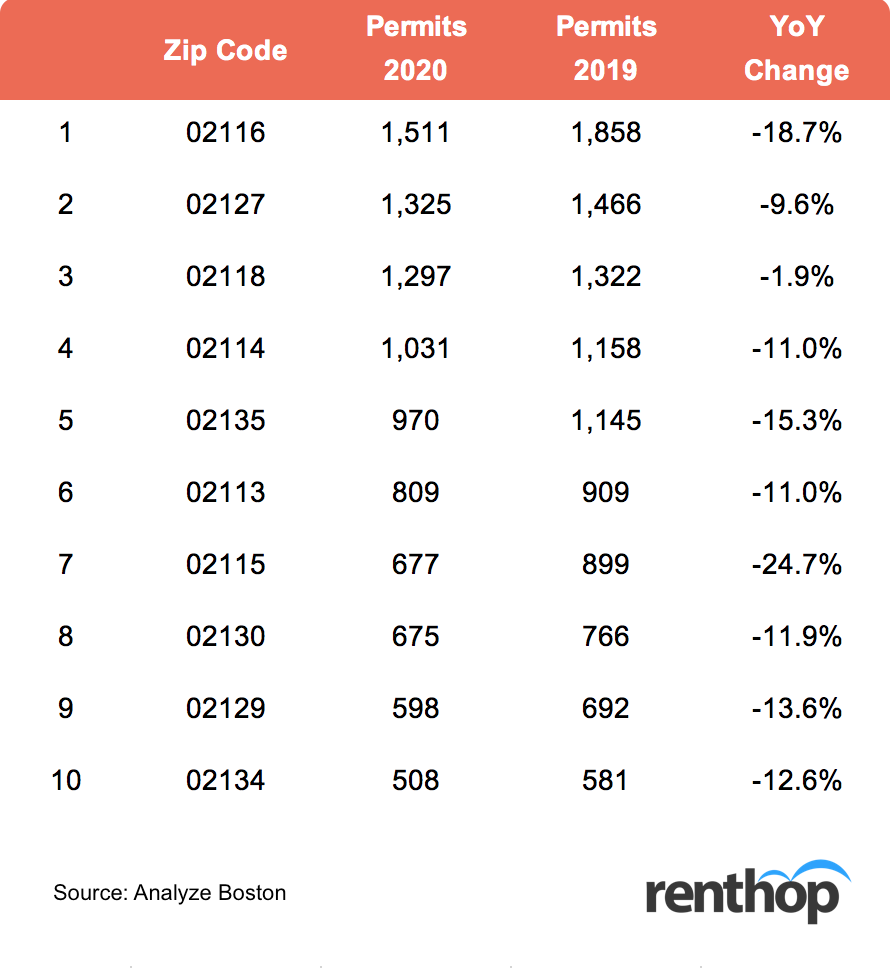 Rent Dropped in Some Zip Codes Amid Moving Downtrend

In addition to grouping and analyzing issued moving truck permits by their expiration dates, we also explored the relationship between rental prices and moving truck permits. To assess the correlation between year-over-year median rental price changes and differences from average yearly issued permits, we plotted the two against one another and calculated the correlation coefficient.

We noticed a slight positive correlation (R2 = 11%) between the year-over-year rent change and the difference from the yearly average of permits issued among zip codes, which states that as zip codes experiencing fewer moving activities compared to the yearly average from 2015 to 2019 saw bigger price drops. 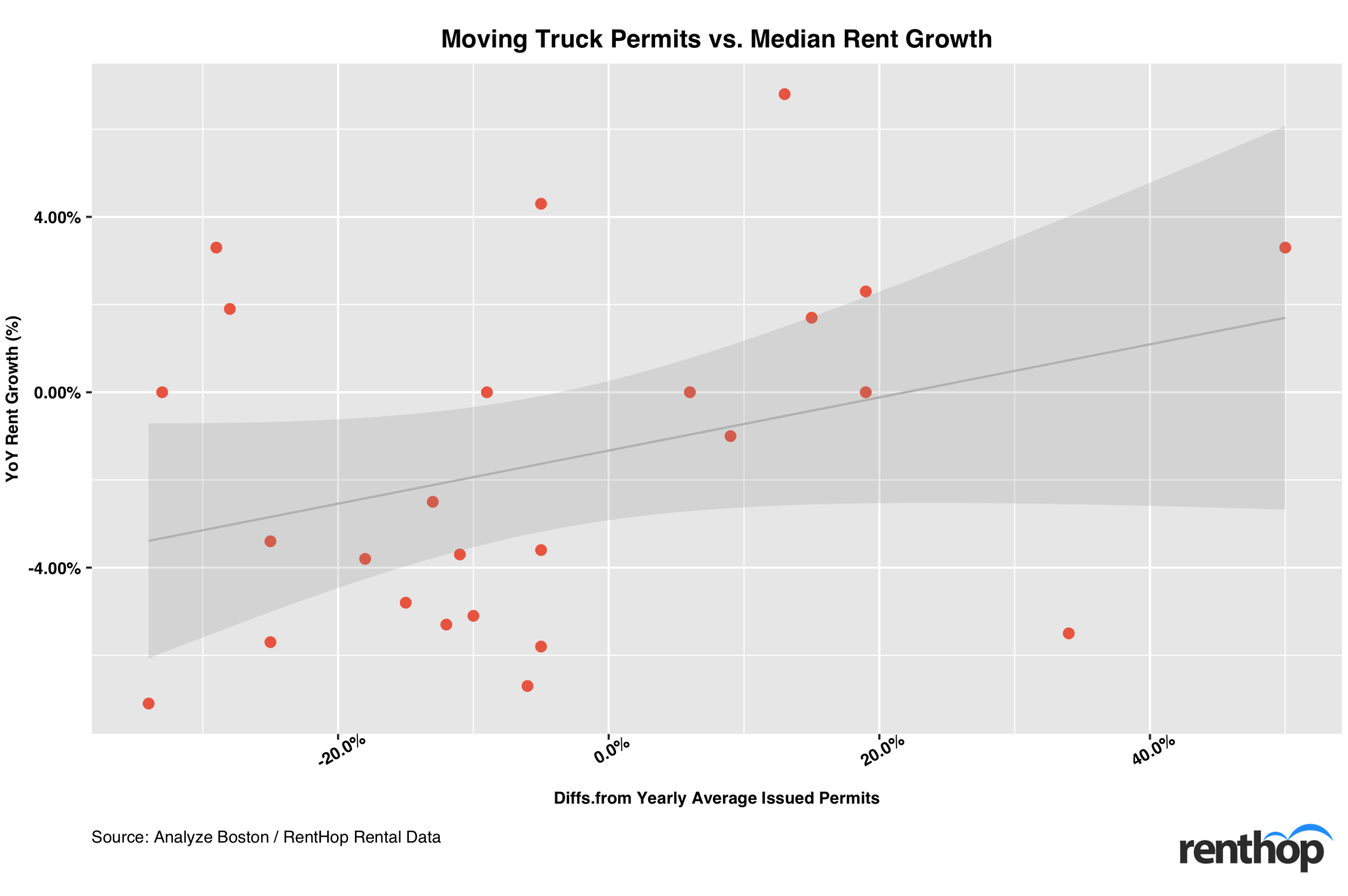 This report examines how COVID-19 has impacted the Boston rental market, specifically through the number of issued moving truck permits and rental rate changes. The moving truck permit data is made public by Analyze Boston. Median one-bedroom rents and year-over-year median rent growth by zip code were calculated using RentHop’s proprietary listing data. For the regression analysis, we included only zip codes with over 10 moving truck permits issued in 2020.

Our previous Boston Move-In Day studies can be found here: