The Madness That is Boston Move-in Day

If you don’t live in Boston, you probably don’t know about the struggles faced by students during the dreaded move-in period. Every year, between late August and early September, new and returning students move into dorms or new apartments near the city’s universities. While moving week is a common occurrence every year, that doesn’t dampen the annoyance of dealing with streets flooded with furniture, traffic delays, and finding alternative routes to work etc. Inspired by the heat map for 2016 used by Kyle Scott Clauss, we decided to take a deeper look into the madness that is Boston move-in day (note, though, that the data/heatmap is no longer available on the Data Boston website for 2017). After all, it always helps to know which areas to avoid around the move-in dates in the city.

We looked at the data provided by the City of Boston for street occupancy permits. Historically, the entire data set was available on Data Boston. This year, though, the data cuts off on July 20th, 2017 (as Data Boston transitioned to a new website). The data is still available from the official site for the City of Boston (but in an imperfect format). We merged the two sets together to create our 2017 daily heat map. The data provides us with the issued moving truck permits for dates up to September 16, 2017. We focus exclusively on the expiration dates of the moving truck permits (which generally coincide with the actual moving dates) instead of the permit issuance dates. You can only apply online for a permit if your moving date is at least two weeks away, and no more than a month away. We created two maps:

When breaking down the weekly map, you can see that there are not a lot of spikes in issued moving truck permits until the week of August 28 to September 4, 2016. Much of Boston is pretty congested and busy around those dates, specifically the neighborhoods that is also the home to, or in close proximity to, Boston’s schools and universities.

Other periods where the map showed a higher than normal amount of issued moving truck permits are around May 22, 2016, to June 5, 2016, and the week of June 26, 2016, to July 3, 2016. Also, some dates throughout late July and early August have more than the usual number of issued permits, but this is to be considered normal as people do tend to move during the Summer months for other reasons than commencing school. However, it is nowhere near the spike we see from the week of August 28 to September 4, 2016. Now, let’s take a look at the next map, taking a closer look at the daily number of issued moving truck permits.

The daily embedded map takes a closer look at the daily number of issued moving truck permits, ranging from August 1, 2017, to September 16, 2017. This map will be a great tool for those looking to check out if their neighborhood will be particularly affected by students and all of their “baggage” during certain dates. By looking more specifically at the individual dates, we see that the following dates have higher spikes than others. This is due to permits ending on those dates.  The top five upcoming dates for August and September, where permits will expire are:

We see that highest numbers of expired permits fall within the typical move-in period for students. Expect to see the streets of Boston being a bit more hectic around these dates, and use the map to see which neighborhood would be affected the most.

From the data provided, it is safe to say that there is a relationship between the number of issued permits and the move-in period for new and returning students in Boston. Looking at the number of issued moving truck permits all the way back in January 2013 to September 2017, this is how the numbers are divided. 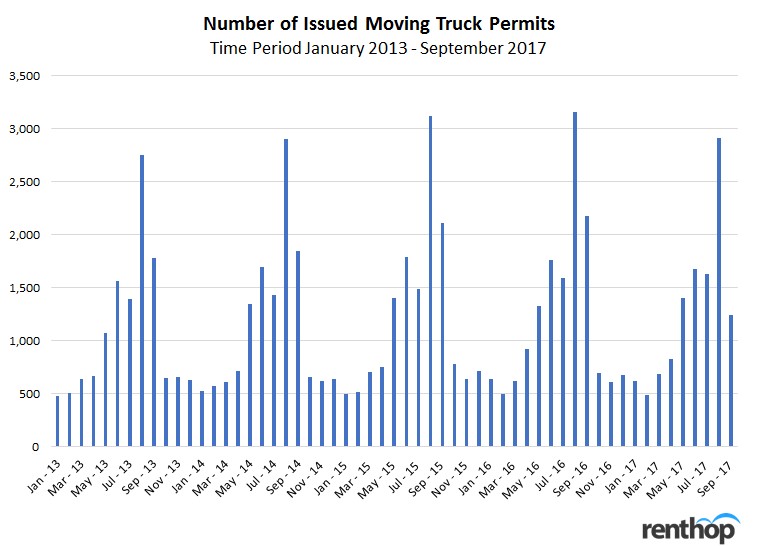 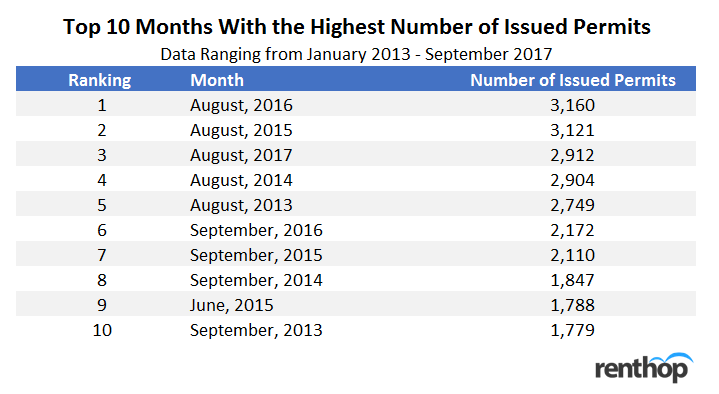 The table above takes a closer look at the number of expired moving truck permits all the way back from 2013 to today. August 2016 is a clear winner with 3,160 issued permits. Furthermore, we’re seeing that the month of August ranks the highest for the five last years, which shows that there is a high correlation between issued permits for moving trucks and the move-in period for new and returning students.

From August 2013 to August 2016 there was a 15 percent increase in the number of issued moving truck permits. August 2017 has only 2,912 permits issued so far but we were only able to pull data up to September 16, 2017, so far. The numbers leave us curious to see how many issued permits we’ll see this year for August, and if August 2017 will beat August last year.

So which areas are the worst to commute in around the move-in period? For you to know which area to avoid, we took a deeper look at the zip codes attached to the issued moving truck permits as well. Knowing which zip codes that are the busiest might help you to plan ahead, if it affects your daily commute to work, the gym, etc. We ranked it by the top ten busiest zip codes based on the number of issued permits. 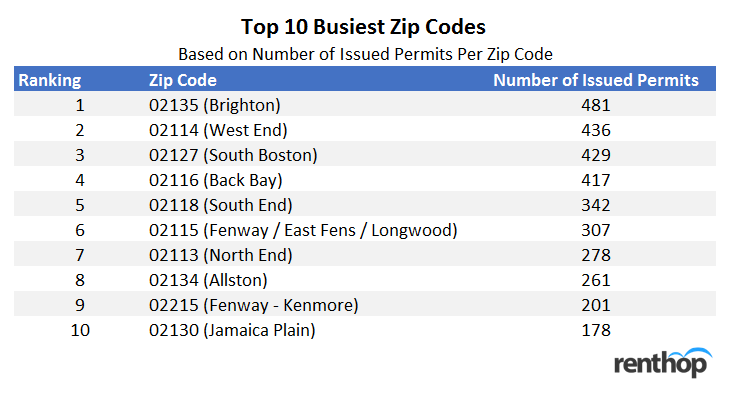 The top zip code with the highest number of issued permits is 02135, which is assigned to the Brighton neighborhood. Boston College is located in Brighton, which could have something to do with the high number of permits for that specific zip code. The runner up is zip code 02114, also known as the West End. The area is located in the midst of the City Center and is a popular place to live. Suffolk University is also in close proximity. The zip code ranked as number ten is for Jamaica Plain, with only 178 permits compared to Brighton’s 481 assigned permits.

If you have a school or university near where you live you probably already know that there will be more traffic than usual around the move-in period. But exactly when is the move-in dates for your local university or school? It might be worth checking the academic calendar to ensure you mark the dates that your area will be busier than normal. Here are just a couple of move-in dates for Boston schools and universities that are coming up in the next couple of weeks, based on the academic calendar for 2017.