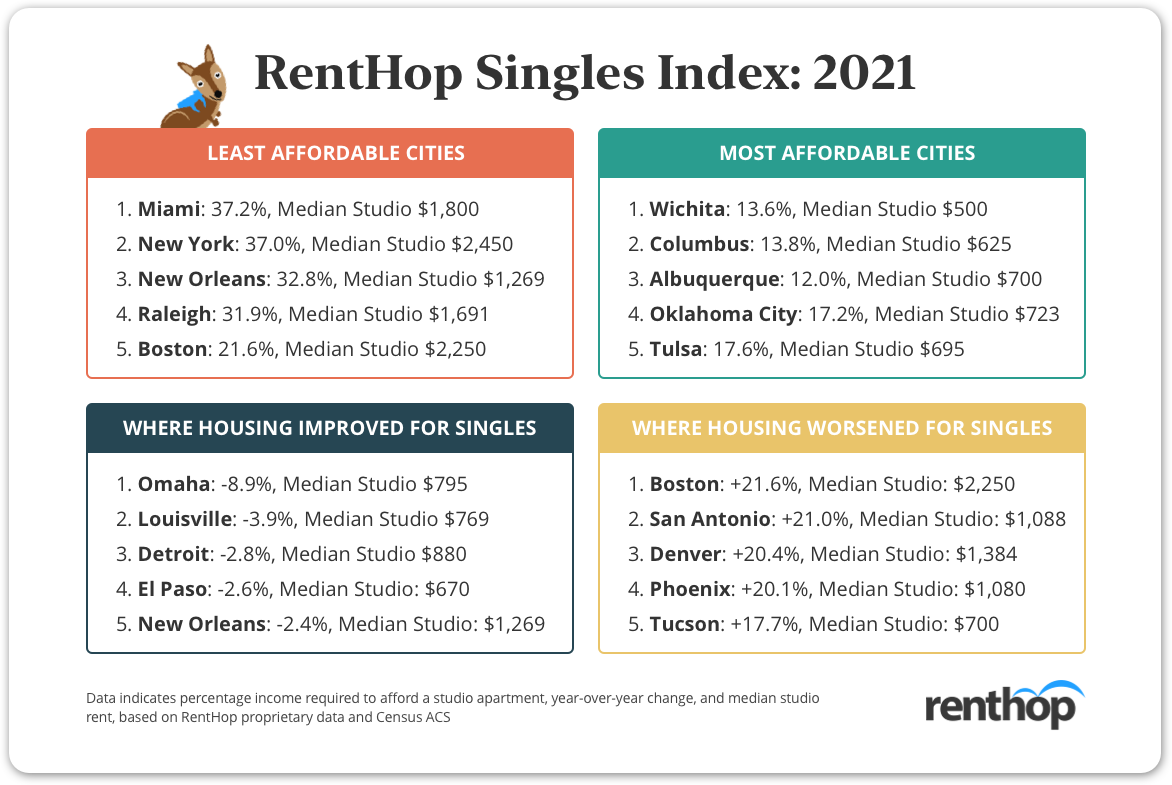 With housing prices dramatically rising across the country, and Americans increasingly choosing to get married later in life, many young professionals are now faced with high rent prices as a single income earner. But are certain cities more affordable than others for singles?

To investigate this trend, we at RentHop explored housing affordability for single people across the 50 most populous cities in the country. This Singles Index looks at the cost of rent for a studio apartment in each city, how these rents have changed over the past year, and how affordable living alone is relative to average local incomes. Here are the results:

1. Miami, FL is the most expensive city in the country for singles. Despite a strong single-earner income of $57,997, an average person would need to spend over 37% of their gross monthly income to live alone. Prices for a studio have also steadily increased over the past year, up over 9%.

2. New York, NY is the second most expensive city for singles, with rent commanding 37% of the average single person’s gross income. To make matters more difficult, prices are also up 8.89% year over year.

3. New Orleans, LA is another unsurprisingly expensive singles city, as local incomes have yet to catch up with rent prices. Given median rent of $1,269 for a studio, a single person looking to live alone in New Orleans would need to spend 32.82% of their gross income on housing.

4. Singles in Raleigh, NC can expect steep housing prices relative to income, with rent for a studio apartment representing 31.86% of gross income for the average earner.

5. Boston, MA rounds out our most expensive list, with prices for housing skyrocketing so far this year. The median studio apartment now costs $2,250 per month, which is up over 21% in the year.

Most Affordable Cities for Singles

1. Wichita, KS is the most affordable city for singles in America, with a favorable mix of cheap rent prices and strong single-earner incomes. A single person in Wichita making an average income would only need to spend 13.63% of their income on housing in order to live alone.

2. Cheap studio prices in Columbus, OH, at a median of $625, helped its favorable ranking, as well as the city’s high income for single earner households.

3. Albuquerque, NM is the third cheapest city for singles, with single-earners only needing to spend 17.14% of their income in order to live alone. The city did become more expensive in the year, with prices up 12% compared to the same period in 2020.

4. Oklahoma City, OK is another cheap city for single earners, with studio apartments at a low $723 rent, and average income of just over $50k for a non-family household.

5. Tulsa, OK takes fifth place on our most affordable list, driven by cheap housing prices at $695 per month, compared to a relatively high singles annual income of $47,342.

Where Housing Improved for Singles in 2021

While rent prices have bounced back significantly from lows seen during the pandemic, a handful of cities have seen studio apartments fall back relative to last year. Omaha was most notable, dropping just under 9% compared to this time in 2020. Seven cities out of the 50 we tracked saw drops, while three remained even on the year.

Rent Cost as % of Income (YoY Change for Studio)

Where Housing Became Worse for Singles in 2021

The vast majority of cities in our Singles Index saw price increases over the past year for studio apartments. The highest of which was Boston, which saw a whopping 21.62% median rent increase compared to the same time in 2020. Close behind were San Antonio, Denver, and Phoenix, which all boomed over 20% year over year.

Rent Cost as % of Income (YoY Change for Studio)

The RentHop Singles Index analyzes both proprietary and ACS Census data to provide a snapshot of housing affordability for single-income households across the 50 most populous cities in the country. To compile our housing price data, we pulled every listing for a studio apartment advertised on RentHop in 2020 and so far in 2021, approximately 1.2 million. In theory, a single person can rent a larger space, but we chose this unit type to represent the minimum space in which one can live alone.

To calculate the index, the following statistics were used: