Boston’s T is one of the largest rapid transit systems in the nation, behind New York City and Chicago and similar in size to Washington D.C. This means hundreds of thousands of people rely on the MBTA to get them to and from work, shopping, doctor’s appointments, and whatever else they may need. It’s no wonder proximity to the T is one of the first things people consider when searching for an apartment in Boston. As important as it is, RentHop’s data scientists want to give renters a hand.

Maybe you already knew you wanted to be close to the T, but do you have an idea of what that might cost? Check out the map below to see how rents are faring at your stop and it just might help you locate the perfect Boston apartment.

To calculate the median rent for the map above, we used RentHop rental data for one bedroom apartments from the first quarter of 2016 & 2017 as well as MBTA GIS data for T stops from Mass.gov. To get accurate prices near the subway stops, we looked first at non-duplicated listings within one eighth of a mile (660 feet) of an MBTA stop and if there were at least 30 unique data points we calculated the median. If not, the radius from the stop was increased and the data was resampled to ensure enough unique listings were used when calculating the median. Nearly all medians were calculated using a radius of 1/8 or 1/4 of mile from the respective T stop.

Ride the Train to Savings

Would you travel an extra stop to save a couple hundred dollars? How about for nearly $1,000?  We dug deep into the data for the best single stop rent savings and found some useful results.

The list below represents the largest price disparities between a single stop. This could be because they are on the edge of a neighborhood, rents dropped at one stop, prices soared at the other, or all of the above. It’s also possible that the typical one bedroom apartment near one stop is very different from an apartment just one stop away.

Turn your commute into extra cash at these stops

Where Does the Train of Rising Rents Stop?

You’ll be hard-pressed to find a spot with rent lower than last year; that’s because rent is up 3.6% YoY, with localized rents up as much as 10% near some stops. The largest gains were seen in areas like Back Bay and South End. East Boston and South Boston also posted big jumps, while rent dips were seen in Somerville and a few spots along the Green Line’s ‘B’ and ‘D’ branches like Brookline Village.

Here’s five of the many stops where rent went up

For the majority of stops along each MBTA line, rents drop as you get further from the city center. While this is the trend, it is not the rule. There are a few standout stops where rent prices are considerably higher or lower than the stops before and after them. 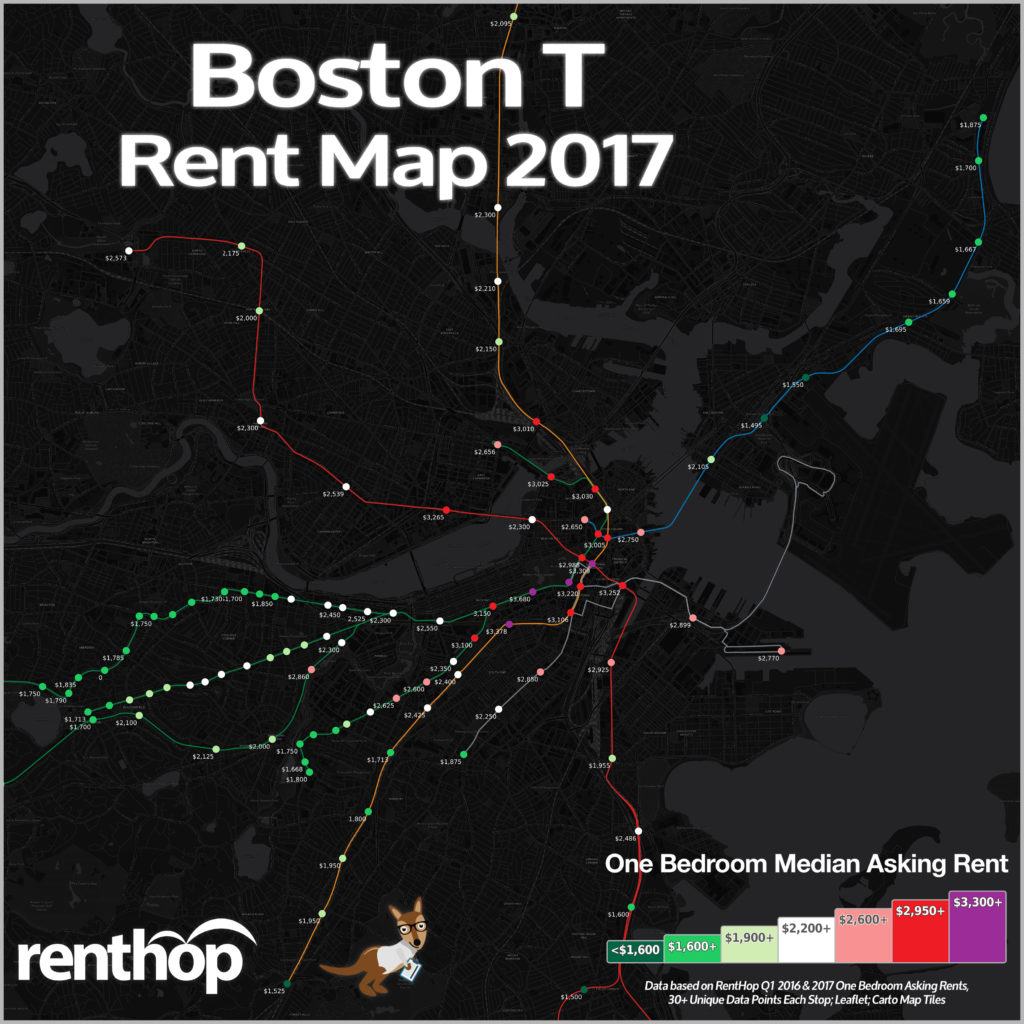 What Does This Mean for You?

Finding an apartment in Boston certainly isn’t easy. Deciding where to live and starting your search can be the most difficult step. By giving you as much information about the market as possible, RentHop wants to point you in the right direction. This map is just one of the data-backed insights we offer. All of our Boston apartment for rent are ranked using available data to ensure that renters always see the best quality apartments.