The Features That Are Increasing Your Rent

The Features That Are Increasing Your Rent

Picking the right apartment is an important life decision. For most, that means finding the right balance between location, space, and affordability. As housing continues to take up more and more of the average American’s income, understanding the value you’re getting for that monthly rent check becomes even more important.

Many details about an apartment can impact monthly rent, other than the amount of space. For example, units that seem similar could be priced differently if one has a balcony. This price differential could be even greater in newer luxury apartments which offer things like concierge service, furnished rooftops, and fitness centers.

So what kinds of features could increase your rent? And by how much? Using thousands of apartment listings across major US cities with details including, monthly rent, number of bedrooms and bathrooms, and the presence of different amenities, we attempt to find out.

It’s important to note that we did not have access to some relevant information, such as square footage, but our model is able to account somewhat for size differences using other parameters.

We identified 10 features across the 10 largest metropolitan areas to investigate. These included:

Ultimately, we found that as expected, the number of bedrooms and bathrooms (highly correlated with square footage) are the biggest drivers of price. The amenities that were most associated with higher rent were having an elevator, having doorman, parking included and laundry in the unit, with each city having some variation.

Also in a rough model, designed to isolate the impact of each factor on price in NYC apartments, we found that having a doorman was the most important and increased monthly rent by about $260. The next most expensive feature was having an elevator, which increased costs by about $120.

The major drivers of rental pricing

In starting our analysis, we wanted to understand the differences in price by location. Grouping the over 450,000 records into cities, we calculated median price for each. 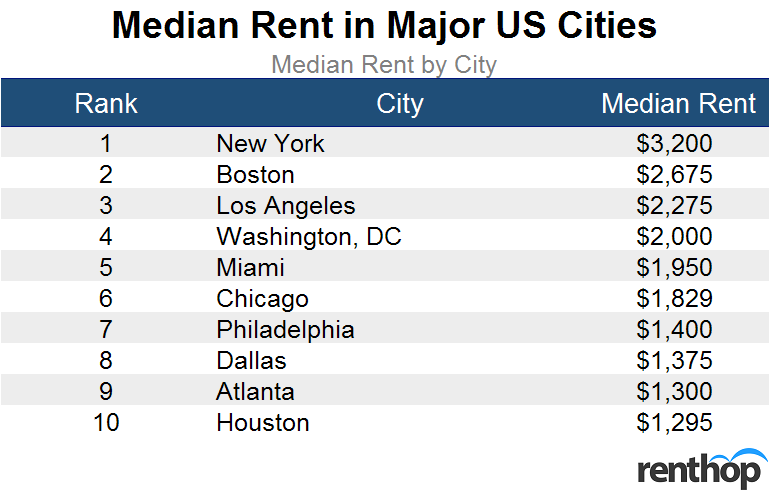 From this we can see that the most expensive city is New York, followed by the Boston area (which includes Cambridge). The least expensive city was Houston, which was cheaper by several hundred dollars.

It is important to recognize that not all apartments are easily comparable. A studio, one bedroom and two bedroom apartment are all very different, and this could impact our median price calculation. To account for this difference, we broke out our city view to compare median price by number of bedrooms. 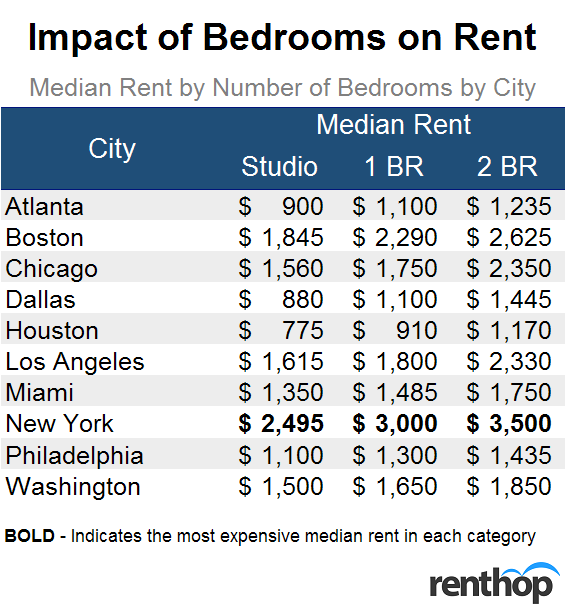 The top three most expensive cities remain the same across all categories, but on the other end of the spectrum there are some differences. While Atlanta, Houston, and Dallas has similar one-bedroom pricing, Dallas has a higher pricing for two bedrooms.

Our goal was to understand which of these factors were most related to price. To start our exploration, we calculated correlation between each feature and higher monthly rent. A strong positive relationship would suggest the two are connected – and thus a specific feature may be more likely to increase your rent. 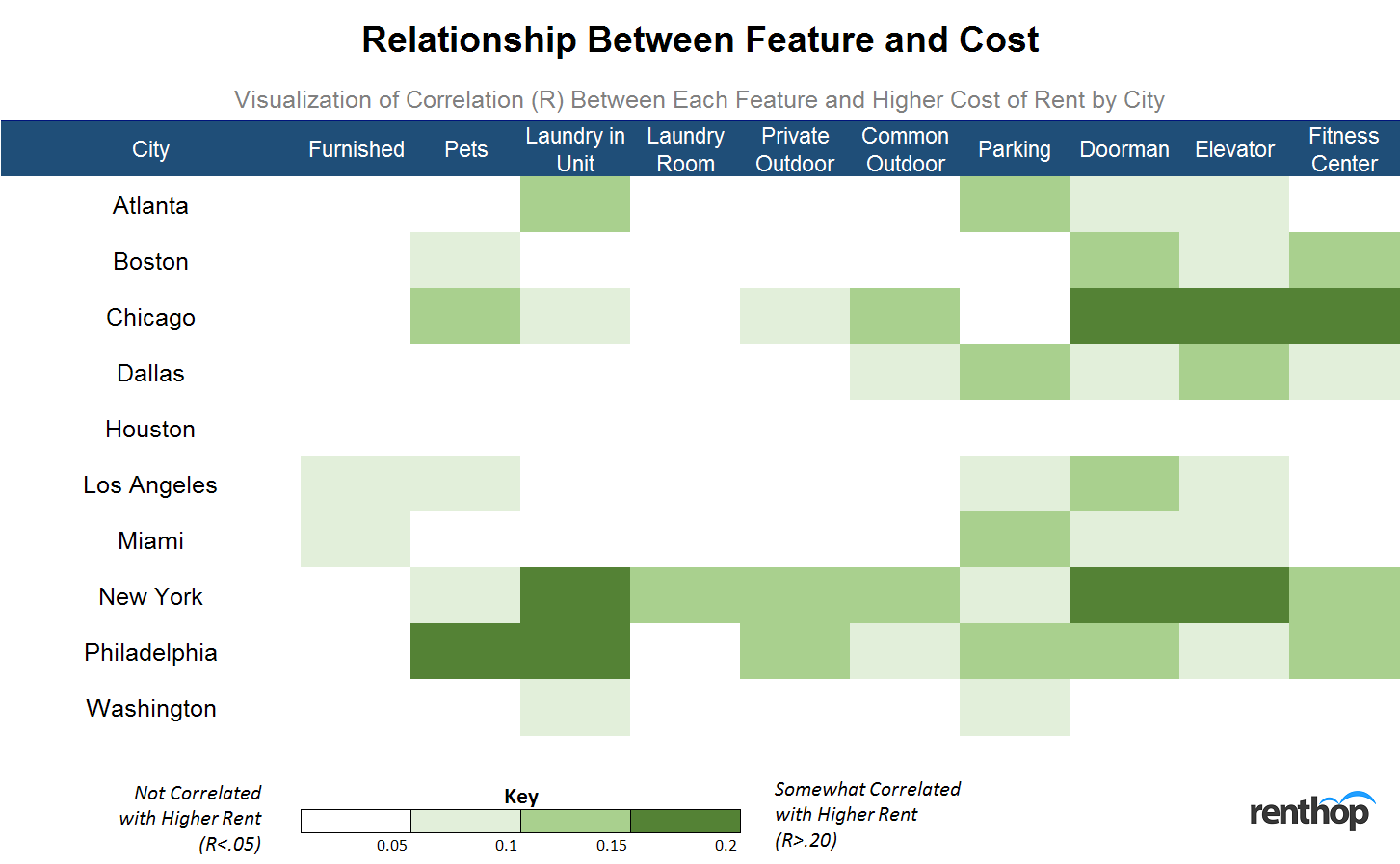 Doorman, elevator, fitness center, laundry in unit, and parking are most correlated with price. Each market has a unique mix of what factors matter most. New York in particular has several important features including pets and fitness center as well as those mentioned previously.

It is important to call out that these factors are only more or less influential in relative terms. In absolute terms, the correlation coefficients are small and suggest only a slight relationship with higher prices.

To understand each factor in more detail we zoomed in on New York City, which offered the largest and most diverse set of data. We analyzed the correlation between higher price and features at a neighborhood level (focusing on the 50 neighborhoods with the most records). Understanding the neighborhoods helped us build a model for the city overall.  For this analysis we focused on listings with 2 or fewer bedrooms.

Each part of New York is distinct and features can have different degrees of importance. To test this, we plotted the results of the top 10 most expensive neighborhoods to find out what was most important for higher priced apartments. 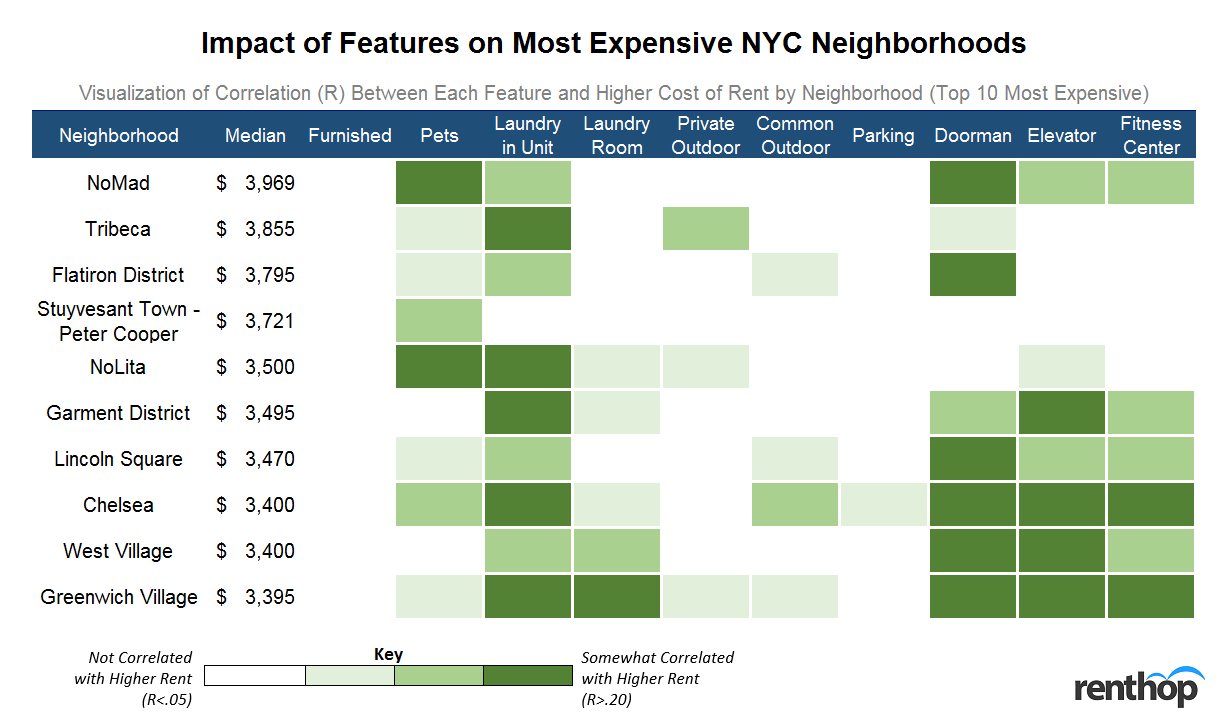 Across the board, there is a strong correlation between laundry in the unit as well as presence of a doorman on cost. Other important features appear to be allowing pets and having a fitness center.

Similarly, looking at the 10 least expensive neighborhoods, we isolated the most important features. This also provided us the benefit of comparing which are important across the range of different neighborhoods. 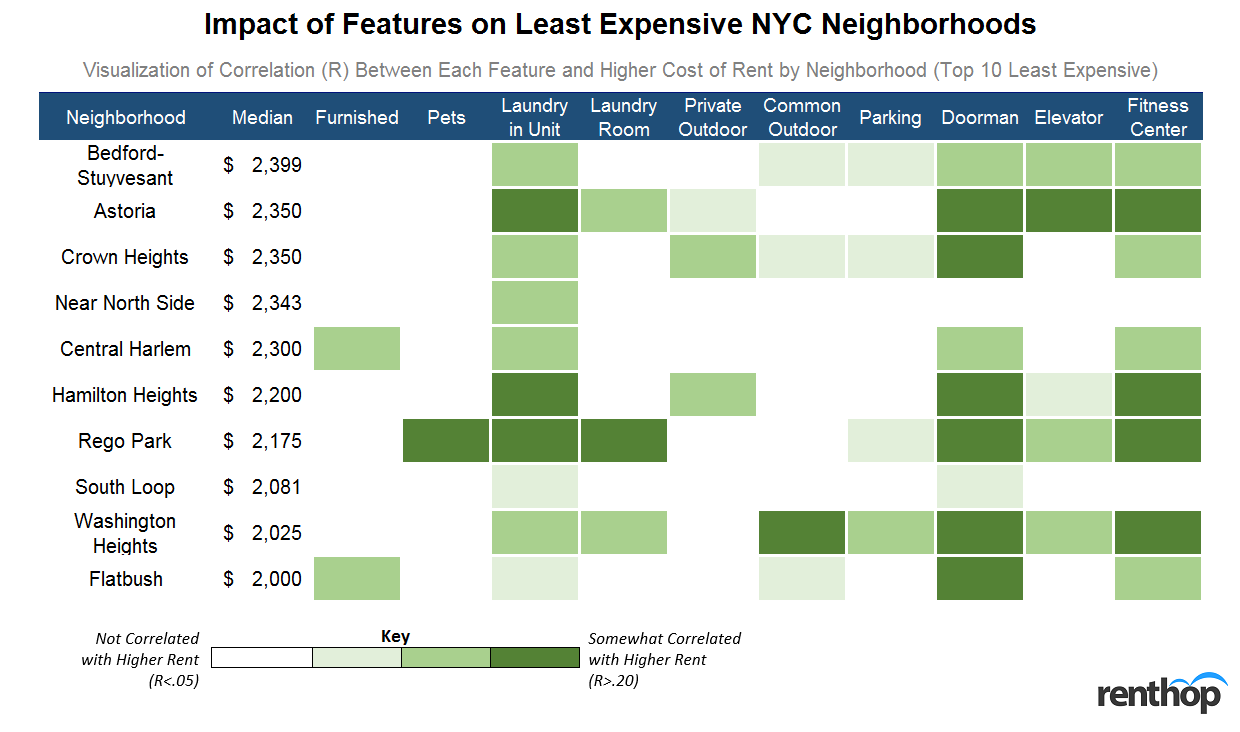 The same main features are important, but the degree of correlation is slightly different. Having a doorman is also a major feature but, laundry in unit is slightly less important. Relative to the more expensive locations, a fitness center is more important, while allowing pets is not correlated at all in most neighborhoods.

Finally, we created a linear regression model to predict the impact of each feature on price. From the coefficients of the linear regression equation, we can see about how much the feature impacted price. The results of the previous correlation exploration helped us to identify which features to include in our model and through a comparison of many different models, we identified the one which best predicted rent from the presence of features.

In the end, we had 9 variables in our model: 1) number of bedrooms, 2) number of bathrooms, 3) allowing pets, 4) laundry in the unit, 5) having a doorman, 6) having an elevator, 7) having a fitness center, 8) having a parking garage, and 9) a factor indicating how expensive the neighborhood is generally.

Controlling for the number of bedrooms and bathrooms, having a doorman has the greatest impact on price at about $260. This may seem like a large amount for just a doorman, but it makes sense as it is a good indicator that the building overall will be very nice and is likely in a more expensive neighborhood. The same goes for having an elevator and fitness center, which contributes roughly $120 and $90 to price, respectively. Finally having a washer and dryer inside the unit is also a major benefit. If you think you’ll spend more in $80 in quarters at the laundromat in a typical month, finding an apartment with a washer dryer may be cost effective for you.

You may have noticed there are many features that are not in our model. The other factors may have been correlated with price, but they did not have enough predictive power to improve the model beyond these four. Also as we stated earlier, this is not a perfect model. There is still a large degree of variation that our variables cannot explain. These numbers should only be regarded as a rough estimate and a way to compare relatively which matter most.

***
In the end, your price will be significantly impacted by what city you’re looking in as well as the size and location. Still, certain features do have some impact on costs and it’s important to keep these in mind when making comparisons. Being aware of the differences between listings (and how much they are worth) will help you make smarter decisions about renting.