Looking To Save Money On Rent? (Get a Roommate)

Would You Get a Roommate to Save 40% Off Your Rent?

One of the most common, although not necessarily the easiest, ways to lower your rent is to move out of that one-bedroom apartment, get a roommate, and move in to a two-bedroom apartment. It’s probably best if it’s not that boyfriend or girlfriend you’ve been dating for a few weeks nor that friend that’s just crashing on your couch “until he figures some stuff out”.

RentHop isn’t here to make life choices for you though, we just want to show you where you can save money and how much. A quick look at the monthly median rent differences in 9 major metro areas showed savings varied from 30.8% in Los Angeles all the way to 42.6% in DC.

Here Are Our Key Findings: 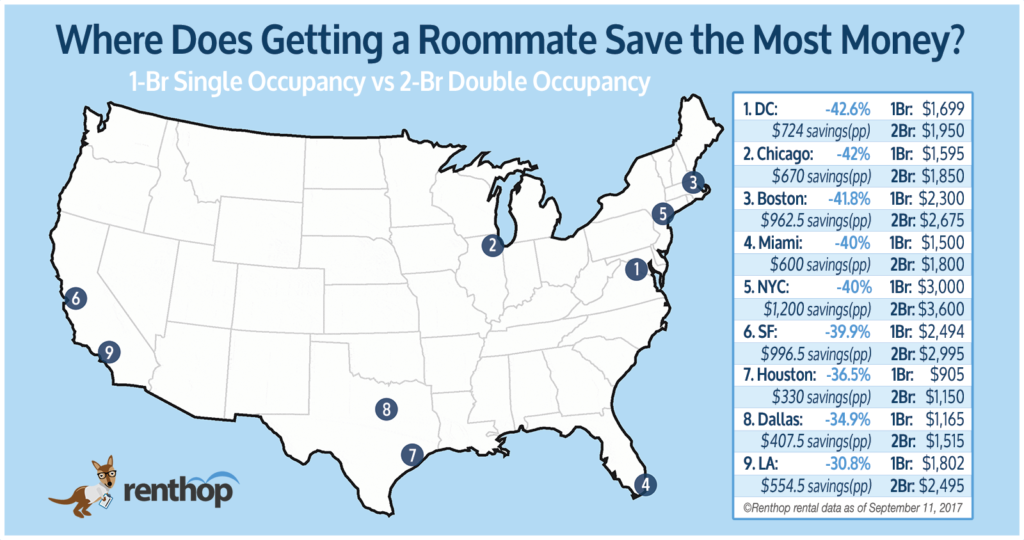 Variability drastically increased at the neighborhood level. Neighborhoods such as South Pointe, Miami Beach and Carnegie Hill / Upper East Side, New York showed little or no savings on the move to a two bedroom (the rent approximately doubles). In high-luxury areas like these there’s a higher occurrence of coveted two-bedroom two-bathroom apartments and less of those pesky two-bedroom “flex” apartments.

Flex rooms are made when a wall is put up to split a spacious one-bedroom into a two-bedroom. They are common especially in New York and San Francisco where new construction doesn’t meet the demand for housing and the desire for location outweighs the desire for space. An often-annoying occurrence for prospective renters is finding out an apartment advertised as a two-bedroom is “flex-able”, but actually doesn’t have the wall put in place yet. RentHop works to ensure these types of listings are properly classified; these apartments won’t be the reason one & two-bedroom apartment prices converge in some regions.

Bathrooms As a Determiner of Savings

Of all the compromises one must make when getting a roommate, sharing a bathroom puts people off the most. For good reason, as it’s usually the dirtiest room in a house. This can easily become a point of tension when shared by people with different hygiene standards. It should be no surprise then that one will need to pony up for a private porcelain throne.

So how much does a second bathroom affect rent?

Sort/re-sort by any parameter by clicking that column. Change cities by clicking the city’s tab and search for your neighborhood by typing it into the box.

A forthcoming apology from the RentHop data scientists: we’re sorry to have left out many neighborhoods and regions due to unavailability of accurate data. Luckily, many of the neighborhoods we call home are sub-neighborhoods of a larger region. If you don’t see your neighborhood, consider the name of the larger region and search for that.

RentHop knows there are many things you consider before getting an apartment. Cost and location are undeniably among the top considerations for most people, but we’re all different. Make your choices based on what’s right for you.