How Much Does Crime Affect Rent Prices?

Public safety and crime rates in major US cities have been getting more attention in the news lately. While historically, crime rates across the country have been dropping since the 1990’s, in the past two years, violent crime has been on the rise. These recent spikes, while far from the crisis of America’s past crime wave, highlight how sensitive communities are to changes in neighborhood safety.

Neighborhood safety is closely connected with the number of businesses, access to public spaces, and most notably, rental prices. We all know the friend that’s moved to a “bad” neighborhood because of more affordable rent prices. When searching for apartments, understanding crime rates can make you a more informed shopper. You’ll know if you’re truly getting a deal or if the apartment is just cheap because no one else wants to live there.

So it’s generally understood that rent and crime are connected, but how much do crime rates impact rent prices?

RentHop is in an excellent position to investigate this question. We have an extensive database of rental listings from major cities across the US. By combining that with crime statistics from law enforcement sources, we can help uncover the relationship between crime and rent.

To begin, we looked at rental and crime data for several large US cities that are major markets for RentHop. Below we’ve shown the total number of crimes in each city for the first half of 2016 (from the FBI Uniform Crime Reporting program). Crime is divided between violent crime which includes assault, robbery, rape, and murder, and property crime which includes burglary, motor vehicle theft, and larceny theft. It’s important to note that while colloquially they are used interchangeably, theft, robbery, and burglary have distinct legal definitions. Overall crime is the sum of all crimes and includes violent crime, property crime, as well as other several other categories. 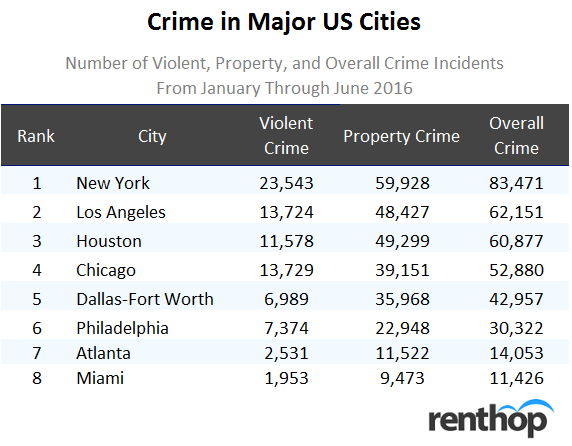 Among these markets, New York City has the greatest number of total crimes, followed by Los Angeles and Houston. Looking at the sub categories, Chicago is second for violent crime, while Houston is second for property crime.

This comparison does not consider the number of people in each city though. Population is highly correlated with crime and we would expect larger cities to naturally to have more crime. Showing each crime category per 100,000 residents, the story changes. 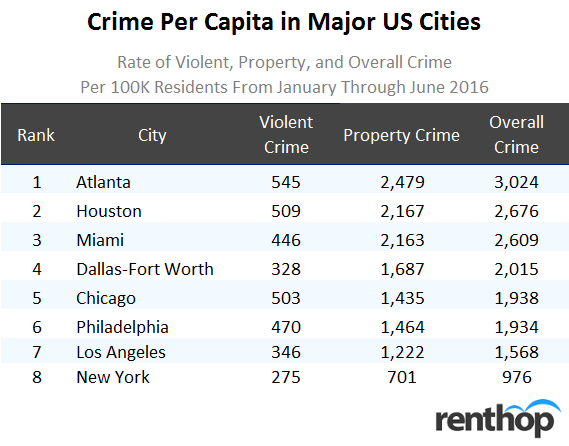 While New York has the greatest number of crimes in this sample of cities, it actually has the lowest crime rate. Relative to its large population, crime is actually low. A much smaller city, Atlanta, is the number one city for crime per capita. Houston and Miami are also in our top cities.

Now that we have a better sense for the degree of crime in these cities, we can explore how rent prices are connected. Creating a scatter plot of median rental price and total crime per 100K residents will visualize the relationship. 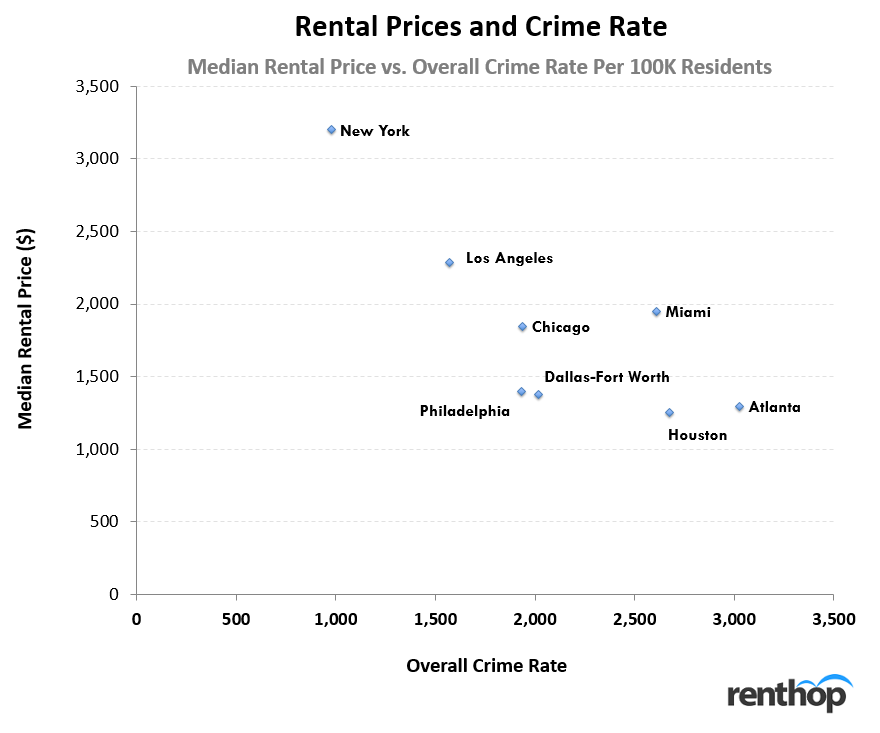 From the graph, we can see a clear downward trend; Higher crime cities have lower rent prices. New York has the highest prices and least crime, while cities like Atlanta and Houston are much cheaper, but have more crime. While there are no extreme outliers, Dallas-Fort Worth and Philadelphia seem to have less crime than cities in similar price ranges.

We have just illustrated that when the total crime rate is lower, rent prices are likely to be higher. Do certain crimes matter more than others for rent prices? To answer that, we have run a correlation analysis on each crime statistic. 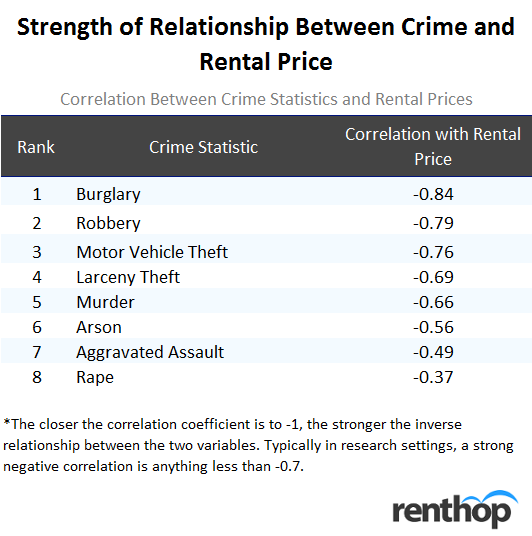 From this analysis we can see that while all metrics are negatively correlated with rent prices, it is most closely linked with rates of burglary and robbery. Prices are least correlated with rates for aggravated assault and rape. That means in cities with high burglary rates, prices will most likely be lower than somewhere with a similar rate of a different crime.

There’s another dimension to this issue, we haven’t explored yet. We’ve been summarizing rental prices and crime at a citywide level, but both can vary greatly by neighborhoods. That is why we took a more detailed look at New York City crime at the borough level. Data from the NYPD, listing all crimes reported in 2016, allowed us to make some comparisons and analyze crime trends.

To start, we looked at number of crimes in each of New York’s five boroughs, Bronx, Brooklyn, Manhattan, Queens and Staten Island. 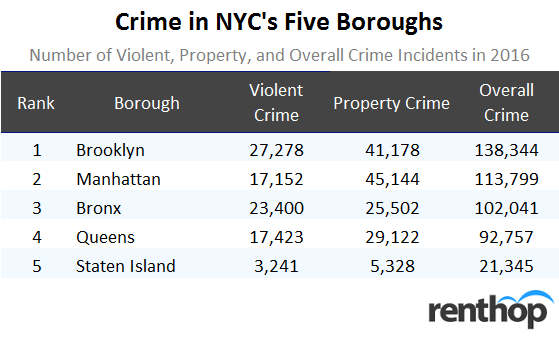 Again, this does not take into account the number of people in each area. It makes sense that Staten Island, with one-fifth the population of Brooklyn would have less crime. To correct for this imbalance, we’ve calculated crime rates per 100,000 people for each borough. 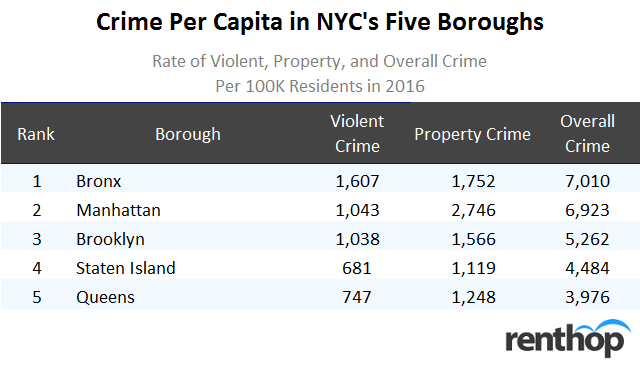 As you may have guessed, these crime rates are strongly connected with rent prices in each borough. We have plotted overall crime, violent crime, and property crime against median rent prices to understand the connection with each.

Within each of these overall categories, specific crime metrics can have very different relationships. Side by side we’ve shown the relationship between prices and the murder rate (part of violent crime), burglary rate (part of property crime), and drug crime rate (a separate category) to demonstrate that.

Murder rate has a clear negative correlation, with the Bronx once again leading the boroughs in crimes per 100,000 residents. Burglary rate and drug crime rate do not have as clear of a relationship. The burglary rate seems relatively consistent at about 150 per 100,000 residents regardless of prices. There is large variation in drug crime rates, but both Manhattan and the Bronx (the highest and lowest median prices respectively) have high rates.

Across all these metrics there are a few lessons though. The Bronx is New York’s most highest crime borough, while Queens is the lowest crime. Queens is also one of the most affordable boroughs. Before heading out to Queens for your next apartment though, you’ll need to consider that many of its neighborhoods are more residential, quieter, and more isolated from nightlife. This greatly contributes to its safety, but it may take away most of the appeal for some.

In both lists, we have mostly neighborhoods in Manhattan and Brooklyn. Central Harlem, East New York, and East Harlem have the greatest number of crimes, while Roosevelt Island, Grant City, and Little Italy have the fewest. This does not take into account the size and population of each neighborhood. Harlem for example is one of New York’s biggest, while Little Italy is one of the smallest (it only spans a few blocks). If we were able to show crimes per capita, the lists would look different, so take these numbers with a grain of salt.

We’ve also shown number of crimes side by side with median rental prices to help give you an idea of the relationship. In general, we can see that neighborhoods with the most crime are cheaper, while those with the least are more expensive. The effect is not an exact relationship though and details like proximity to entertainment, access to transportation, and apartment features need to be taken into account when determining the value of a rental. Still, this should serve as a good guide of what to expect in each neighborhood if you plan to move to New York.

If you’re trying to find a new rental, make sure you do your research on crime and safety. Be sure not just to chase a bargain wherever it leads because that could put you in a less than safe area. As we saw from our data, the cheapest areas are also those with the most violent crime. Still don’t just judge a neighborhood just by its looks or what you read on some blogs. Use actual police data, try to talk to current residents, and if you’re comfortable, visit the area yourself. With the right information, you can find the exact neighborhood you’re looking for.