Violent Crimes by Neighborhoods in Chicago in 2018

Chicago has been considered a dangerous city in many respects since as early as the 1960s and, in many years, has been considered the “murder capital” of the United States. With attention focused on shootings and gun crimes in Chicago, RentHop’s data science team has taken a look at violent crime in the city to gather insights about how one can evaluate neighborhoods in the context of violent crime.

The map below shows violent crime in 2018 along with neighborhood statistics like population and median 1-bedroom rent:

By clicking on any of the community areas highlighted in green (with shades of green varying by the median 1-bedroom rent), you can see statistics for a given neighborhood like the community area’s population, its median 1-bedroom rent, the number of reported violent crimes, and the violent crimes reported per capita. Note, that these statistics include crimes that were reported even if no arrests were made.

Furthermore, as you click on the map’s clustered circles, you can zoom further into neighborhoods to see instances where violent crimes have occurred, down to specific blocks and locations. Note that the specific crimes on the map only include those that have an arrest associated with them, whereas the aggregate statistics by neighborhood include all reported crimes (irrespective of whether or not an arrest was made).

You can also look at individual neighborhoods using the following data table:

Note that you can sort on any of the fields by clicking the header column.

To make the map above, we pulled data from Chicago’s open data portal, pulling the trailing 12 months of data, made public by the Chicago Police Department’s CLEAR (Citizen Law Enforcement Analysis and Reporting) system. Then, to normalize the data, we pulled population data from community data snapshots provided by the Illinois government.

We limited the scope of our analysis to violent crimes, which include robbery, assault, battery, criminal sexual assault, and homicide, and we only used data for the 2018 calendar year (e.g. January 2018 onwards). For median 1-bedroom rental prices, we used RentHop’s proprietary rental data over the 2018 year-to-date, focusing on community areas where we had sufficient rental data. 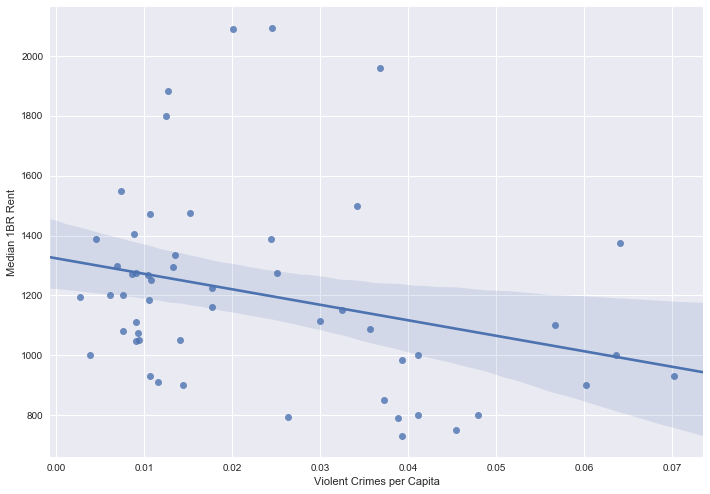 What does this mean for you?

While there’s no escaping violent crime in any city, let alone in Chicago, having insight into where said crimes occur is an important data point in your apartment search. This combined with moving further away from downtown, or adding some more time to your daily L commute can be an important consideration when thinking about an apartment.