As a real estate startup, Renthop understands the amount of time one spends considering the neighborhood in which to live. What if you could find out the political views of your New York neighbors before you see the hats and bumper stickers of that candidate you just can’t stand? Well our data scientists crunched the numbers from FEC.gov on New York’s campaign contributions, so you can do that!

To create the map, we picked up where we left off with the nationwide data here. We took the FEC’s disclosure reports detailing individual contributions to candidates. Using data from the most recent national filing on February 20, 2016, there were just over 1.17 million documented contributions, totaling nearly $300 million for all candidates’ campaigns. To make this data more usable, we cleaned it up a bit first, grouping together line items from people with the same name, from the same zip code and with the same occupation, effectively removing duplicated entries for the same person. It’s important to note that data is not required to be collected about individuals that give less than $200 during the entire election cycle, but since this stipulation affects the data for each candidate, we feel it is still statistically relevant for comparing the candidates to each other.

With the resulting data on 399,009 unique donors nationwide, we set out to see where they are and who they support. Candidates like Jeb Bush and Ben Carson collected significant amounts of money, but have since dropped out, so they have been grouped together with the rest of the former candidates. The interactive pie chart will always show candidates proportionate to each other, whether showing all or just the candidates you've selected.

If anyone is huge in New York City, it’s Hillary 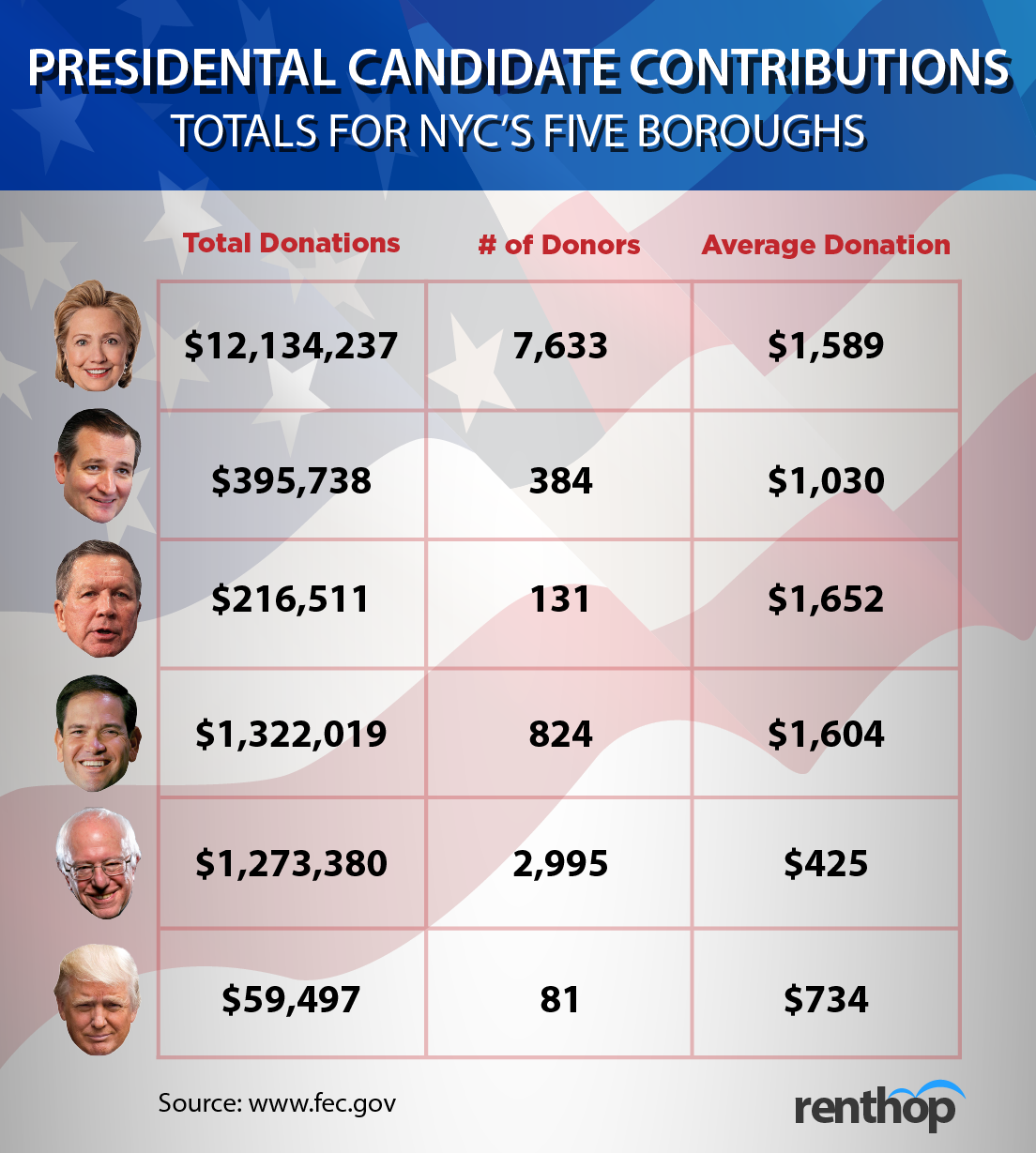 Most donors live in Manhattan. Surprised? 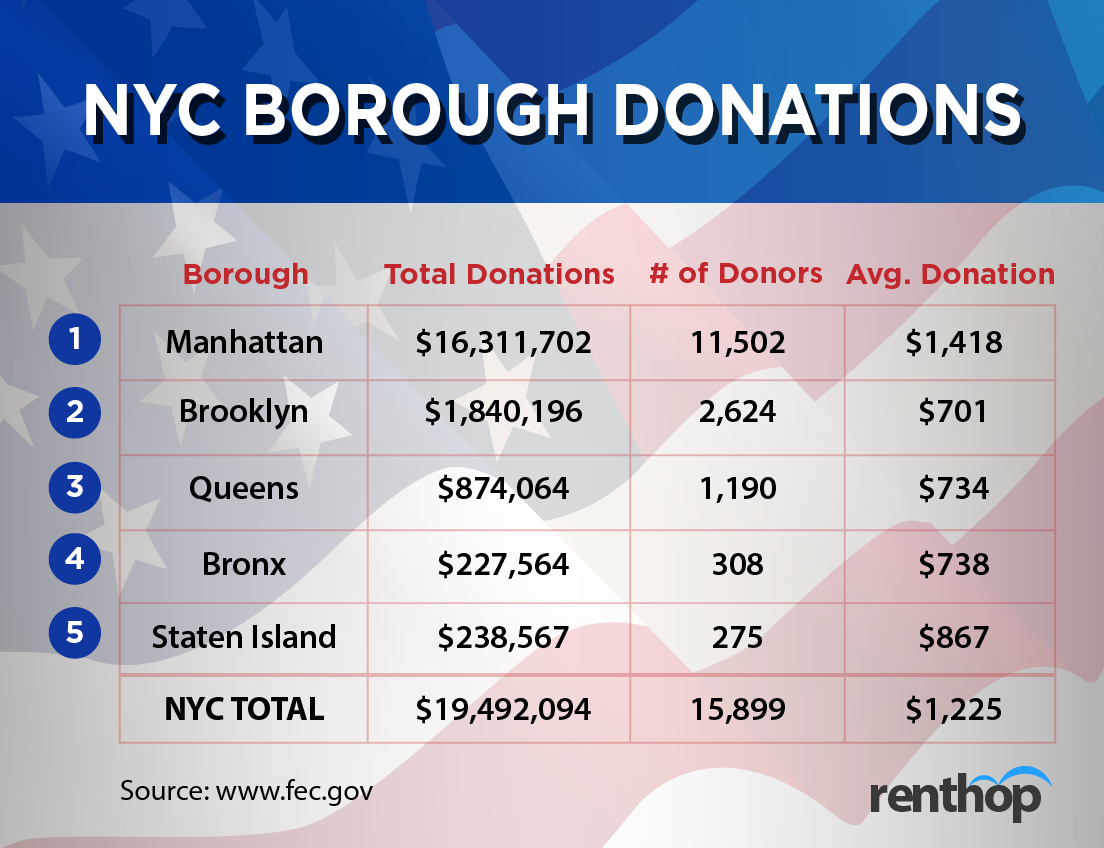 It’s no secret that Manhattan holds the most wealth of the five boroughs, and it’s quite apparent that residents are ready to throw that money around when it comes election time. Not only are there more donors, but they also shell out almost double what others give across the city. Staten Island has the least number of donors, but don’t forget, it’s also the least populated borough. 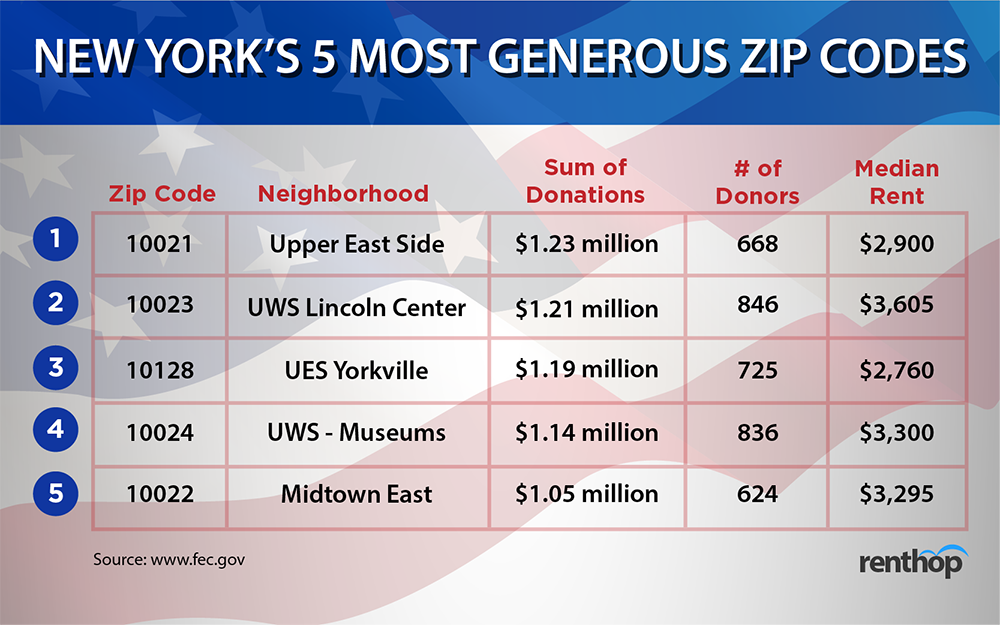 As you can see, the Upper West Side and Upper East Side lead the pack in contribution totals.

When calculating each candidate's top neighborhoods, we filtered down to the zip code range of 10001-11499, which represents New York City as well as some near north parts of the New York Metro Area that often associate with the city. New York’s top donating zip codes can be seen in the chart above. We’ve omitted the $4,868,420.30 unitemized contribution to the “Hillary Victory Fund”, which was registered in zip code 10185 - the mailing address of Hillary for America. This likely contains donations from across the country, but since it's unitemized, there's no way to be sure.

After looking at the whole city, we took a close look at the individual candidates. We analyzed where each has the strongest show of support based on percentage of donors supporting them and total dollars collected there. In order to not end up with a list of zip codes where the candidate had 100% support due to having the sole donor we looked only at areas with at least 25 donors (the mean was 54.9 among all zip codes with at least one donor).

Since Hillary is the dominating force here, and first alphabetically, we’ll start with her. She raised $12.1 million (including that previously mentioned $4.9 million) and counting from 7,633 different donors in New York City. Walk around in Battery Park, Chelsea, or either side of Central Park, and you’re likely to run into Clinton donors. It’s no secret that she’s a favorite among deep pocketed individuals, so much so that in just the Upper West Side between 59th and 91st, she received as much as Trump has nationwide. That’s pretty impressive, but unfortunately for Hillary, there aren’t enough voters in the Upper West Side to decide the election.

Ted Cruz has raised $942,644 from 1,674 unique donors in New York State, but a mere $395,738 from 384 donors here in New York City. To find neighborhoods where he has a concentration of donors, we had to look (far)outside Manhattan read Hillary Country . He has his strongest show of support in neighborhoods like Sheepshead Bay and Mount Vernon. He collected a good sum from donors in Battery Park and, like others, collected well in the Upper East Side.


Rubio Rounds up Support in these Neighborhoods

Marco Rubio has a nice hold in affluent neighborhoods outside Manhattan like Riverdale and Briarcliff Manor. He’s raised a respectable $2.34 million in New York State, and $1.32 million across the five boroughs. He leads the Republican pack by a wide margin in most neighborhoods. Even in Rafael "Ted" Cruz's best neighborhoods, Marco collected more than double what Cruz has.


Find out which Neighborhoods are Feeling the Bern

Bernie Sanders has a strong presence in New York with 7,830 unique donors in the state and 2,995 in the five boroughs. His $1.27 million in New York City funding doesn’t really compete with Hillary, but Bernie is the candidate most affected by the lack of data from donations under $200, so one should assume his supporters are being drastically underrepresented here. Nonetheless, support for him is strong in Brooklyn and Queens, as well as other progressive thinking neighborhoods like Chelsea and the Upper West Side.

Last but not least - unless we’re talking about donor counts or funds raised - is Donald J. Trump. He's made it known that he doesn’t need your money, which is probably why he has raised so little of it. The Donald raised just $208,891 in New York State from 404 unique donors. For New York City proper, that number drops to just 81 donors, contributing $59,497. Although it could be said that his donors are everyone whom has visited the Wollman Rink in Central Park, or stayed at one of his hotels, or lives in one of his buildings, or... you get the idea.

Staten Island - specifically Great Kills and neighboring New Dorp - are the most pro-Trump areas of New York, if we take it down to donors and dollars. At ten donors, Hell’s Kitchen is the area with the most Trump donors, but he has a very low share of the area’s donor population.


There’s certainly plenty of other interesting things to note, but we encourage you to explore the map on your own.

If you’re in the market for a new apartment, or were just influenced to move because of this study, be sure to check out the extensive selection of New York City apartments for rent.