Here's Why Rents are So High in the Bay Area

The Bay Area is known for its limited housing options and high rent growth. While high-paying tech jobs are one of the reasons why rents are so high, the level of construction is also key. Similar to what we did for the City of Los Angeles, we looked into the building data released by San Francisco and San Jose, to see where construction has been concentrated, whether housing supply is meeting the demand, and how rents have gone up.

Let’s first look at where construction has been concentrated, and the 2017 data (as of November) especially gives a decent indication on where new housing supply will likely pop up in 2018 and later (since it takes roughly one year between permit and occupancy).

Blossom Valley has been one of the most popular neighborhoods for construction in the past five years (specifically between 2013 and 2015). However, the past couple of years, a majority of the new residential units have been concentrated in the Downtown/Fairgrounds area (even adjusting for population), and it seems that most of the construction will be concentrated in this neighborhood in the coming year or two. In addition, construction in North San Jose/Berryessa is also catching up. This could be related to the BART Sillicon Valley extension, and in the next couple of years we expected to see more construction in this neighborhood.

While single-family houses and suburban family lifestyle are still the mainstream in San Jose, new construction is flowing into the zip-code 95113 area, with around 30 units per 1000 population level every year in the past two year, and the construction value of the projects (for multifamily buildings with 5+ units) are in the $150 – $200 thousand/unit range, followed by the $200 – $250 thousand/unit range. This reflects the current rental price level in the San Jose area. With Google’s plan to build a massive new campus in the capital of Sillicon Valley, we expect to see strong rent growth and more construction flowing into Downtown San Jose in the coming few years. 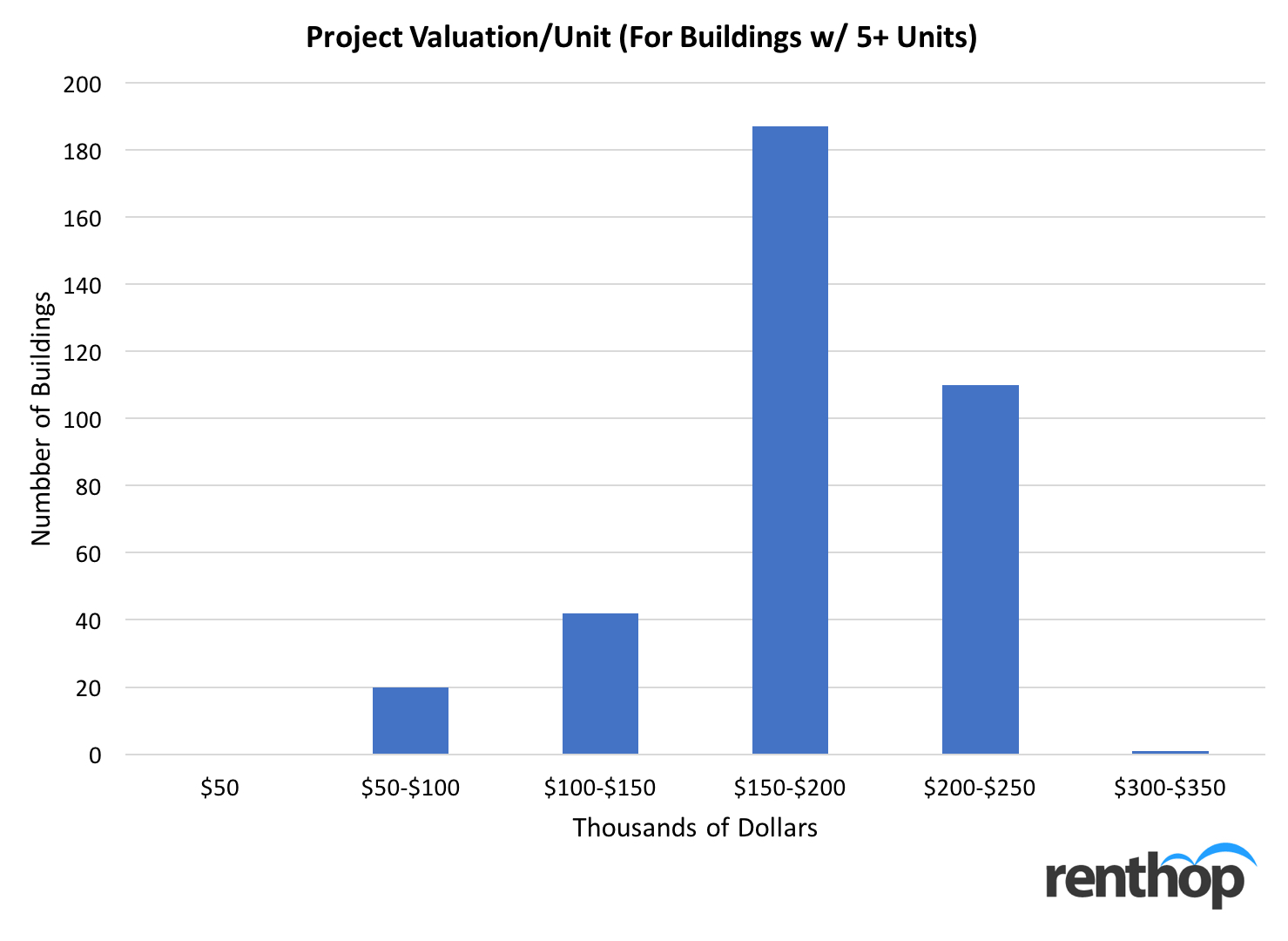 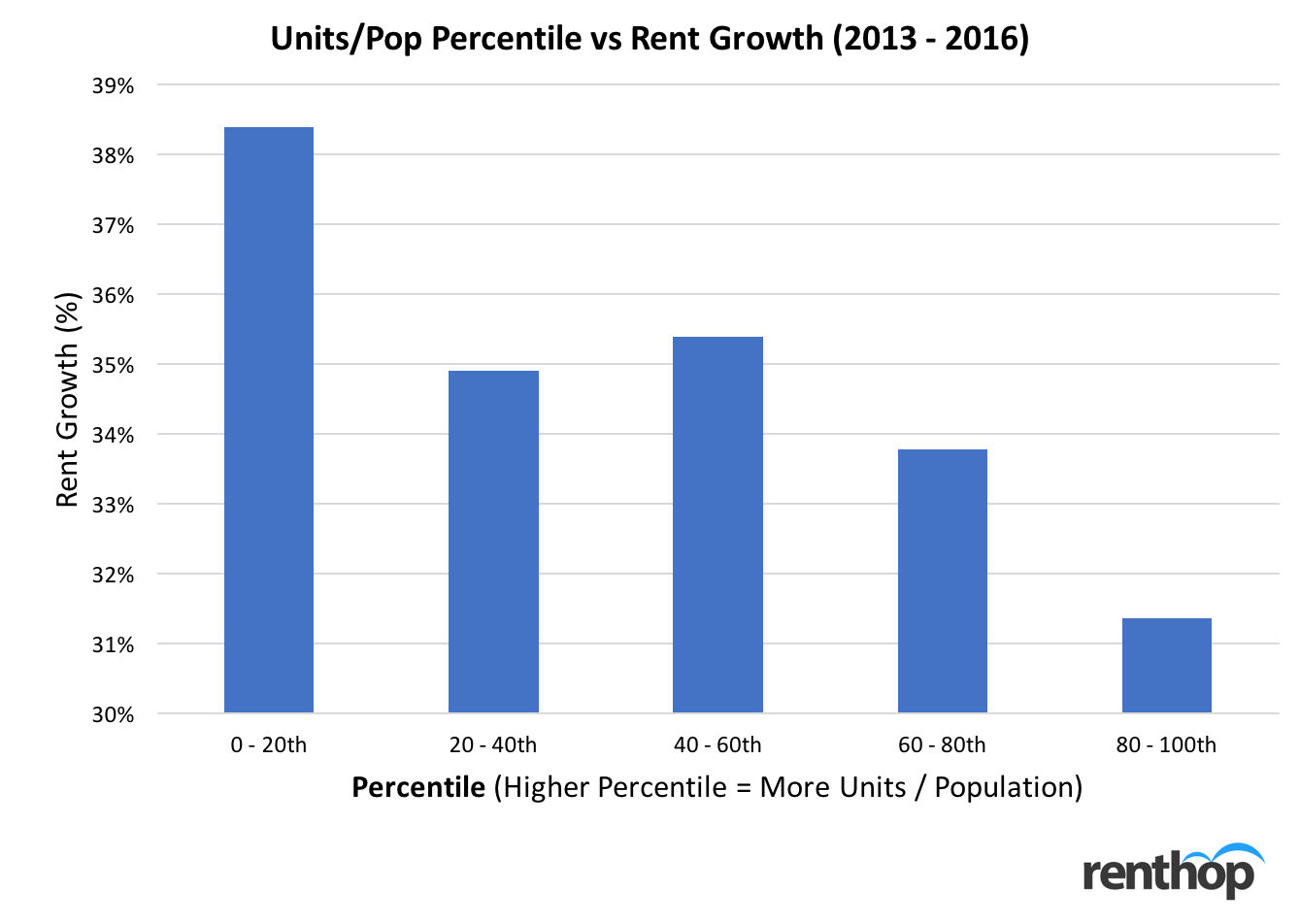 It is important to point out that most of the hottest neighborhoods (near city center) happen to be in the top 20th percentile. While it is true that more supply slows down rent growth, it is possible that rents tend to grow slower in the city, as the market is reaching the sustainable price (as in, there’s only limited room for rent growth for the rental market to function). Changes in periphery areas might be higher than changes in city center areas (as price increases significantly). However, construction is still key here to rent growth, as zip-codes in the 60 – 80th percentile (some of which are also near city center and some even have higher rents than the city center) experienced higher rent growth, with less construction.

Similarly, for San Francisco, we first look at where construction has been concentrated.

Even adjusted for population, a majority of the new residential units have (and will) be concentrated in the Northeast area (SoMa, Inner Mission, and South Beach) since 2011. SoMa, specifically, experienced a spike (over 90 units per 1000 population level) in construction in 2016, followed by Inner Mission with 1183 units. We also noticed that much of the new residential inventory permissioned and constructed tend to be in the luxury range. The construction value of the projects (for multifamily buildings with 5+ units) are in the $150 – $350 thousand/unit range. This is somewhat expected as San Francisco is known for its skyrocketing rents. 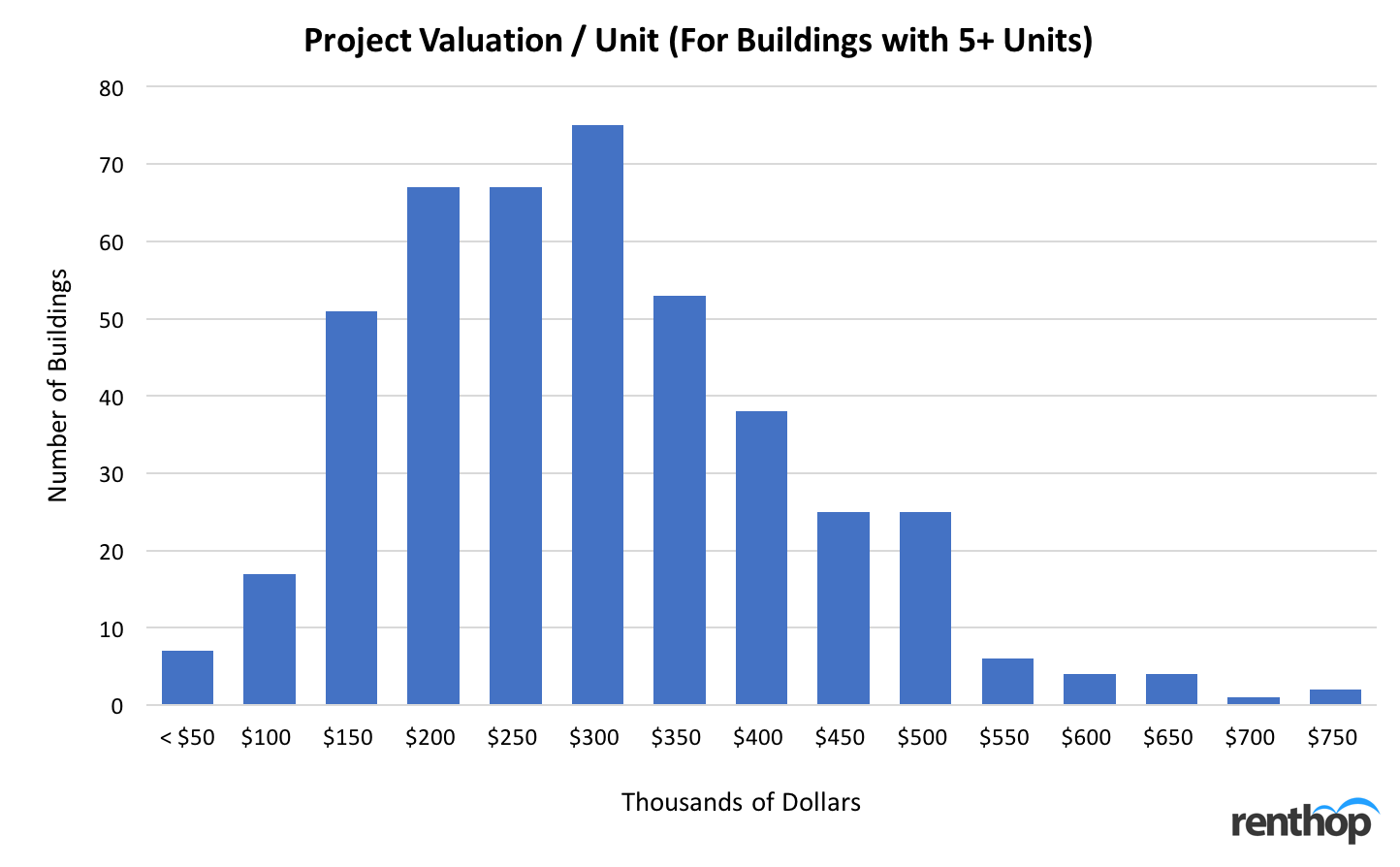 In terms of the relationship between construction and rent growth, San Francisco in general has experienced a far stronger rent growth compared to San Jose — the rents went up over 40% in most neighborhoods between 2011 and 2016.  Since San Francisco has less zip codes, instead of putting them into 5 buckets like what we did for San Jose, we divided them into 4 buckets. We found that between 2011 and 2016, zip-codes in the lowest 25th percentile of permits and construction experienced roughly an average of 8 percent higher than rent growth zip-codes in the top 20th percentile. 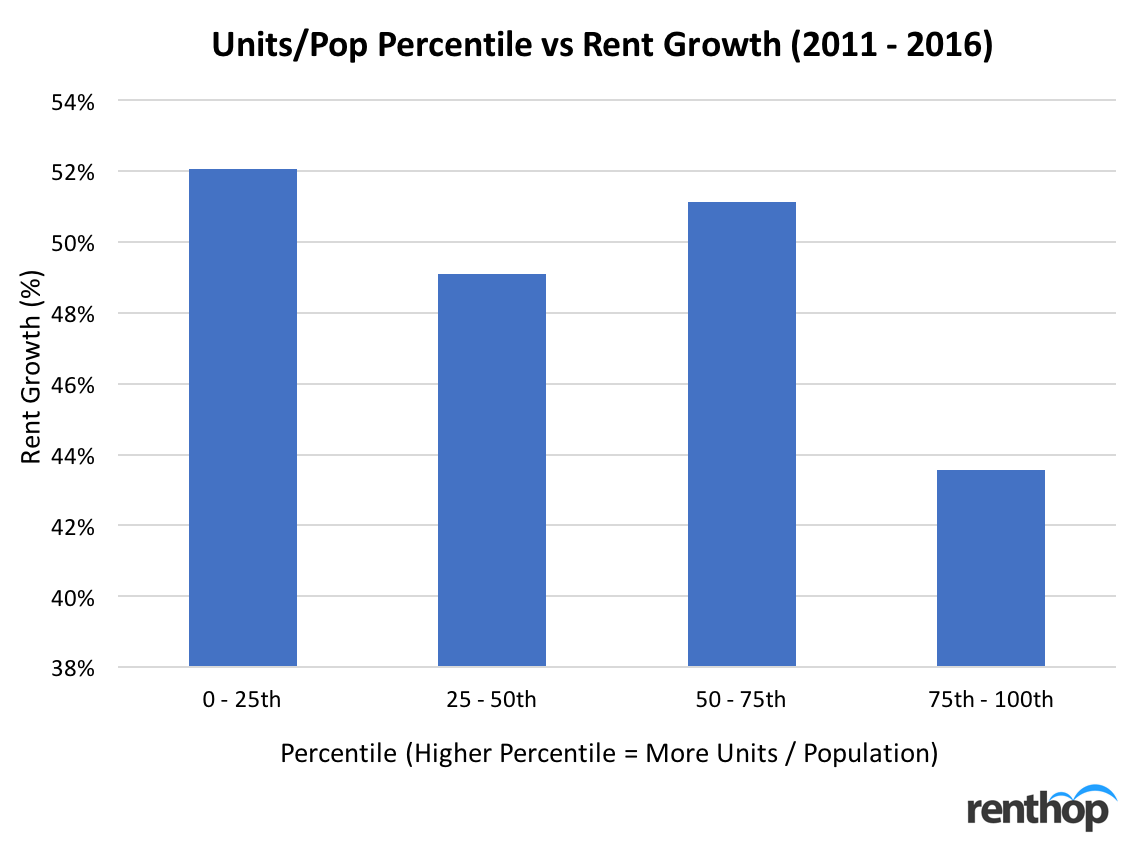 Construction is one of the key factors that affect rent growth in one area, as it indicates how much supply will be hitting the market. Indeed, the reasons behind the soaring rents in the Bay Area go far beyond construction (such as high-paying jobs created by the prosperous technology industry). However, our study of building permits issued by the City of San Jose and San Francisco does highlight the strong relationship between rent growth and construction, and where new construction will likely pop up in the coming couple of years.