The previous study analyzed individual donations in the 30 most populous U.S. cities. This time around we took a deeper look at the individual donations on a city and zip code level, including New York City. We chose specifically to rank zip codes by donor counts instead of dollar amounts, as we feel this better represents how many people support each candidate.

The interactive map below highlights New York City and its zip codes. More detailed, the map shows where each zip code stands, politically, and which presidential candidate is the frontrunner in each zip code. By clicking on the zip code or selecting from the drop-down menu, you will get more information on which candidate is the front runner and which candidate raised the most money in donations in that specific zip code. For a more detailed analysis of how each candidate is doing in the same zip code, view the corresponding interactive line graph above the map.

While Pete Buttigieg only took the lead in 35 zip codes in terms of unique donations and 32 zip codes in terms of the total dollar amount raised, we still see that he managed to become the front runner candidate in several Manhattan zip codes. In addition, as we can see from the interactive map above, the percentage donor share for Manhattan is completely democratic donations.

It’s important to note that the colors approach the data from a different angle. Blue zip codes are zip codes where the aggregated number of unique donations of all 18 Democratic candidates is higher than the number of unique donations received by Donald Trump, and red zip codes are areas where Donald Trump alone attracted more unique donors than all 18 Democratic candidates combined. While we are still one year away from the general election, Donald Trump has started gaining momentum in certain zip codes, particularly in Staten Island and Queens.

Following the fundraising data is a good way to get insight into where each candidate stands with the public as donations equal support. Looking at the unique donor counts instead of the dollar amount raised also better represents how many people support each candidate. We’ve therefore put together a line graph that shows each candidate’s donation progress. 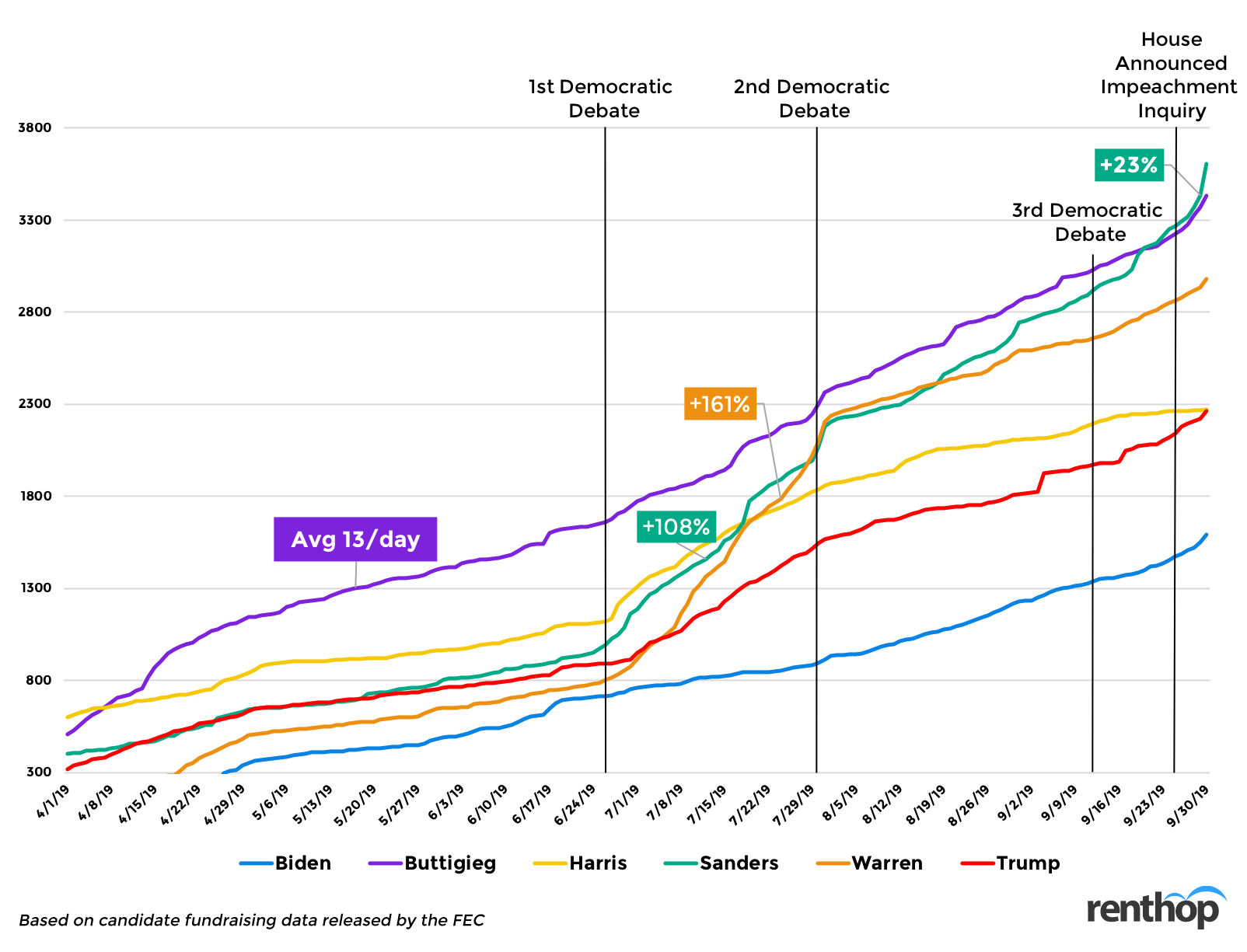 Above we see the timeline for each candidate and their donation progress from April to the end of September. Mayor Buttigieg gained momentum early on in New York City, bringing in on average 13 unique donations each day. The first surge in donations happened after the first democratic debate, where candidate Sanders and Warren both saw a surge in donations by 108% and 161% respectively between the first and second debate. Trump also saw an increase in donations after the first democratic debate, but nowhere near the same percentage as Sanders and Warren, but this might change as we get closer to the 2020 election. While both candidates have been seeing an uptick in donations throughout the race, Sanders saw another 23% increase in donations after the third democratic debate (shortly after the impeachment inquiry). Meanwhile, Donald Trump saw another wave around the time when the news about the whistleblower complaint surfaced. The number of unique donations continued to grow after the impeachment inquiry was announced.

The interactive chart below compares the top five Democratic Candidates to the average number of unique donations amongst the group.

As one can see, Bernie Sanders has recorded an incredible shift in momentum. In April, Sanders trailed the pack by -37% in terms of unique donations compared to the average, by July he jumped to a respectable +37% above average, and in September he surged to the lead with a whopping +84% above average. Despite being the early front-runner in the polls, Joe Biden has consistently recorded below-average unique donations since April, dropping to his lowest point of -78% below average after the first debate in late-June. Interestingly, the de facto favorite according to the betting markets, Elizabeth Warren, has seen unique donations plummet from +79% above average in July to -17% below average in September. Pete Buttigieg has remained the most consistent among the top 5 candidates, recording above-average unique donations for 5 out of the last 6 months.

Since New York consists of five large boroughs, we thought we’d break down the donations by borough in addition to zip codes to better understand New Yorker’s diverging views. You can also select the boroughs from the drop-down menu on the map to learn more.