Under normal circumstances, noise is bad. For many renters and homeowners, noise is their #1 enemy when it comes to living in the City of New York, whether it’s street noise, construction noise, loud music from the bar downstairs, or banging noise from your next-door neighbor.

But things have changed in the past few weeks. Noise is now a good thing, especially in the epicenter. Ever since Governor Andrew Cuomo announced a state-wide “stay at home” executive order on March 20 (and later launched on March 23) to fight COVID-19, most New Yorkers have chosen to abide by the order and self-isolate in their homes. Of course, it’s not easy to physically distance yourself from others for a long period, especially if you are used to the party scene in Lower Manhattan or morning walks in Prospect Park, and so sometimes, you sing on the balcony. Some other times, New Yorkers fight with their roommates or partner for more fridge space to accommodate the dozen bags of food they get from Whole Foods.

Regardless of the types of complaints, noise reflects the current state of New York City – most New Yorkers are practicing social distancing and staying at home. To better understand how lives have changed since the battle against the coronavirus and if people follow the self-isolation recommendations, we took a look at the 311 noise complaints.

Here are our key findings: 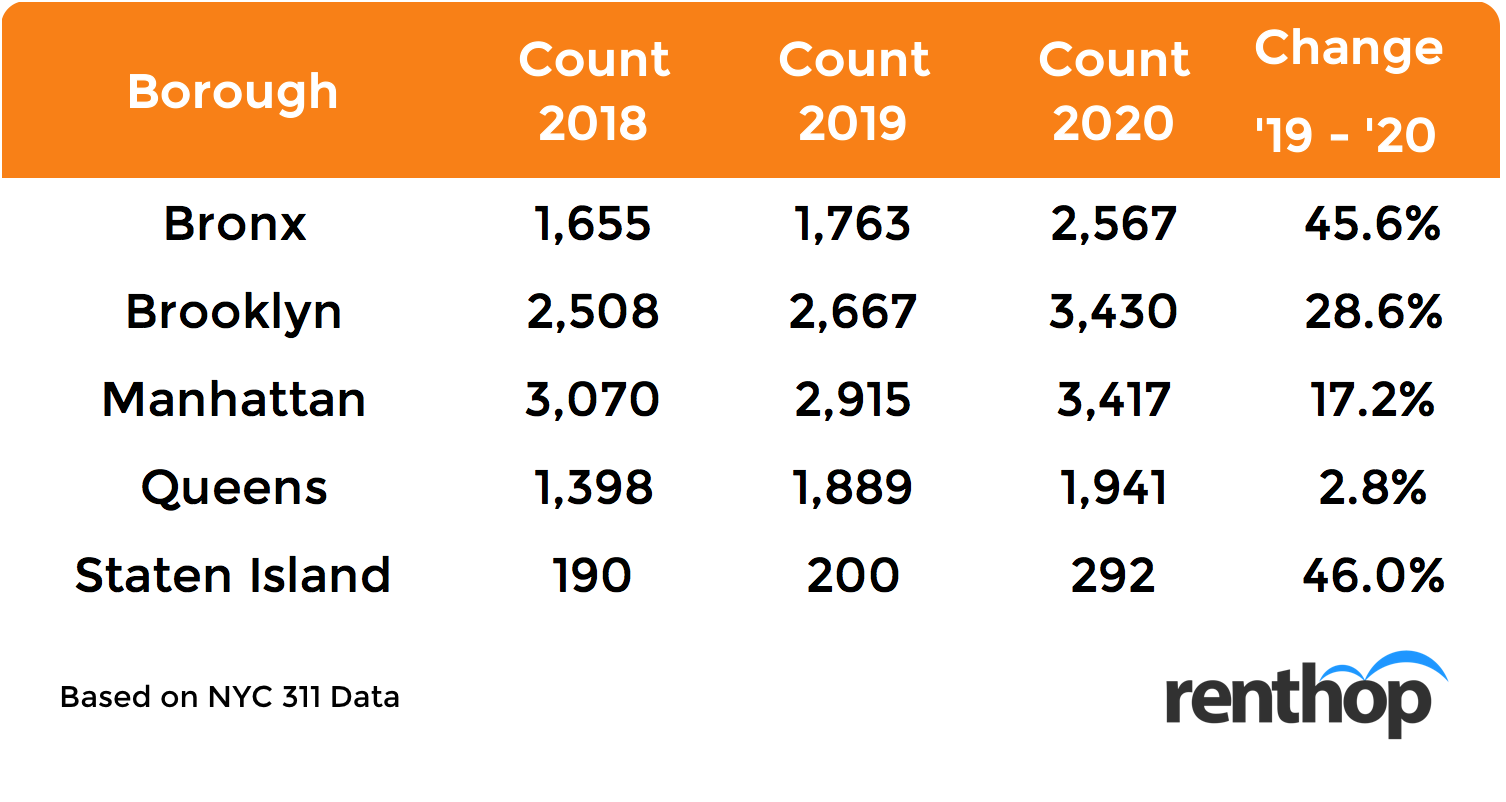 Noise Complaints Concentrated in Neighborhoods Farther Away from the City Center

Now that we know the complaints went up in all five boroughs, we’d like to know where these complaints were concentrated. Is there a relationship between the number of noise complaints and the city center? Does it relate to where people live versus where they work?

The interactive heat map below demonstrates the magnitude of noise complaints by location. You can hit the “play” button or drag the slider to explore. As we can see from the map, generally speaking, for the period from March 20 to March 28, noise complaints occurred in places farther away from the city center. Could it be that as non-essential businesses temporarily closed down and adopted the WFH (work-from-home) policy, the city was just less crowded, which resulted in fewer complaints? Or, maybe tenants of luxury apartments rely on building management when it comes to noise, instead of resorting to 311.

Is Your Neighborhood Doing a Good Job?

While most neighborhoods in Manhattan experienced a drop in the number of noise complaints, Gramercy, a neighborhood filled with residents looking for peace and privacy, saw a 70% jump in complaints, from 56 to 95 this year, or 63.9/10k households. But that’s nowhere near what Lower East Side experienced. Lower East Side saw a 100% increase, from 181 in 2019 to 363 in 2020, or 120.1 complaints/10k households. But generally speaking, the increase concentrated in areas above 96th street.

In the Bronx, 73.7% of the neighborhoods saw more noise complaints during the time frame of our research, including University Heights-Morris Heights (+20%), East Concourse-Concourse Village (+60%), and Eastchester-Edenwald-Baychester (+140%). In Westchester-Unionpoint, the number of complaints more than doubled, from 23 to 49, or 55.8/10k households. For those who self isolate in Parkchester (+650%), while the act is highly appreciated and right, maybe it’d be nice to slightly lower the volume of your TV and speakers.

Meanwhile, residents in 25 of the Brooklyn neighborhoods (or 49%) felt the externality of self-isolation. Noise complaints went up in places including Fort Greene (+60%), Bushwich North (+20%), Flatbush (+70%), and Bath Beach (+100%). In Crown Heights South, 121 noise complaints were filed between March 20 and March 28 this year, or 82.5 complaints/10k households. This number is 80% more than the number of complaints filed during the same period in 2019. Williamsburg, on the other hand, saw a decrease of 40%, which might not at all be surprising considering the number of bars and night clubs that were forced to close down temporarily.

While noise complaints only went up by 2.8% in Queens, it doesn’t mean residents there are doing a bad job fighting the coronavirus. The noise complaint count still went up in densely populated neighborhoods, such as Astoria and Hunters Point-Sunnyside-West Maspeth. From March 20 to March 28, Astoria received in total 170 noise complaints or 50 complaints/10k households, 20% more than the same period in 2019.

Meanwhile, people living in Staten Island are really feeling the burden. While only 52% of the neighborhoods saw an increase in the number of noise complaints (lower than the Bronx), the number more than tripled in some places, such as Arden Heights (18.2 complaints/10k households) and Oakwood-Oakwood Beach (12.2 complaints/10k households). These were once the quietest neighborhoods in the City of New York.

Top 10 Neighborhoods with the Most Number of Complaints

Noise Complaints Soared in these Neighborhoods

Is It Purely a Coincidence?

Of course, one can argue that the growing noise complaints have nothing to do with COVID. To explore this possibility, we looked at both the number of complaints by day from March 20 to March 28, as well as the addresses being reported daily. Figure 3 shows the number of complaints per day in 2020 compared to that in 2019 and 2018. As we can see clearly, 2020 is somewhat an abnormal year. NYC collectively received more noise complaints in seven out of the nine days in our research time frame. On the day March 20 when the “stay at home” order mentioned in the state briefing to the public, the city saw 1,750 complaints, 781 more than in 2019. Perhaps people partied harder that weekend as they knew soon they’d have to stay inside their tiny NYC apartment for a while? 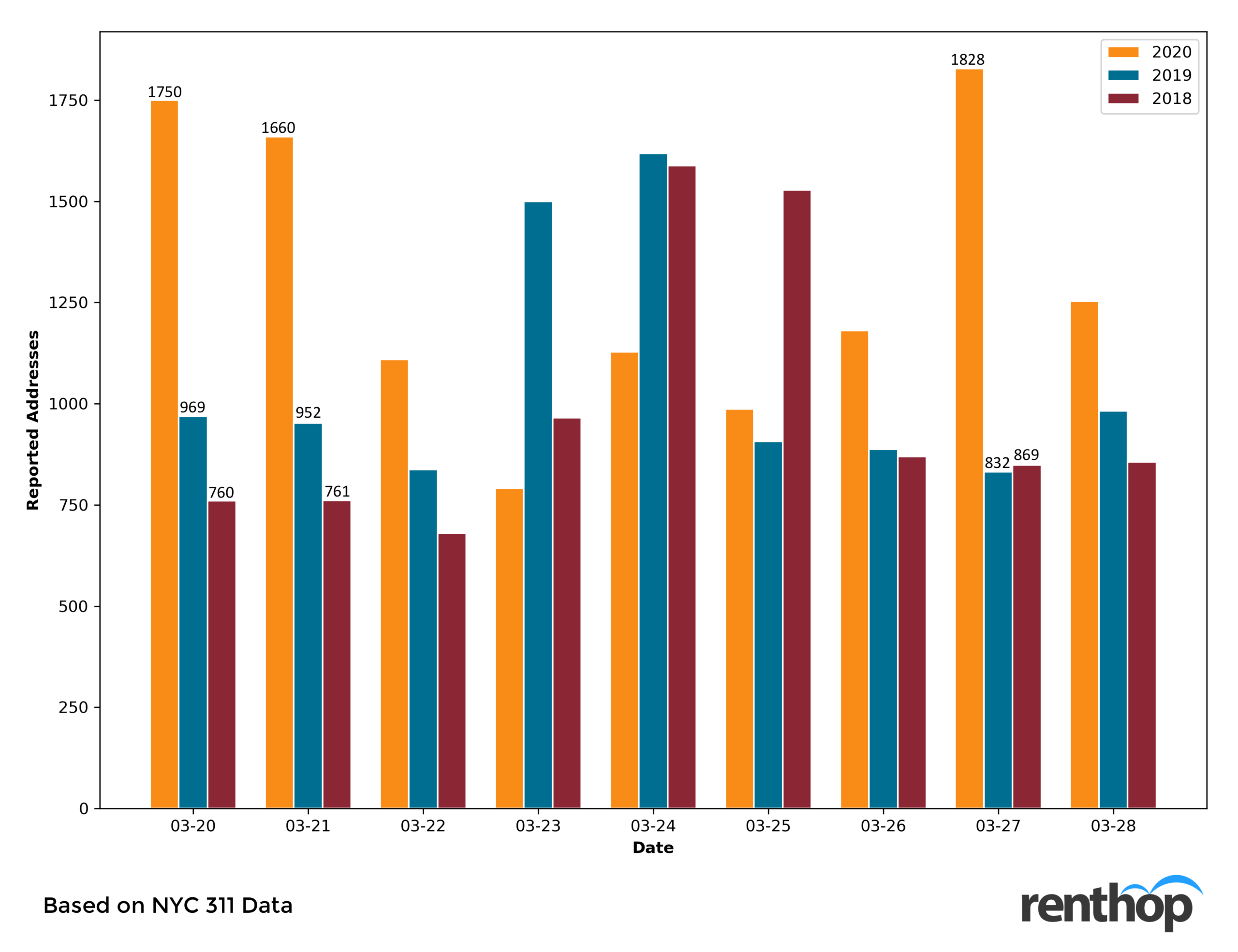 We also looked at the addresses being reported. Here again, we can conclude that the year 2020 is not like previous years. While we did not group complaints on the same building within the same day (since the noise incident could last for a while and affect multiple residents), we did notice that more unique addresses were reported as the state and city launched aggressive measures to combat the coronavirus. On March 20, in total 1,730 unique addresses were reported, compared to 853 the previous year. This means that of the 1,750 complaints reported, only 20 of them were duplicates, indicating a surge in noise complaints. On March 27, the number reached close to 1,800, more than doubled the amount received on March 27, 2019. 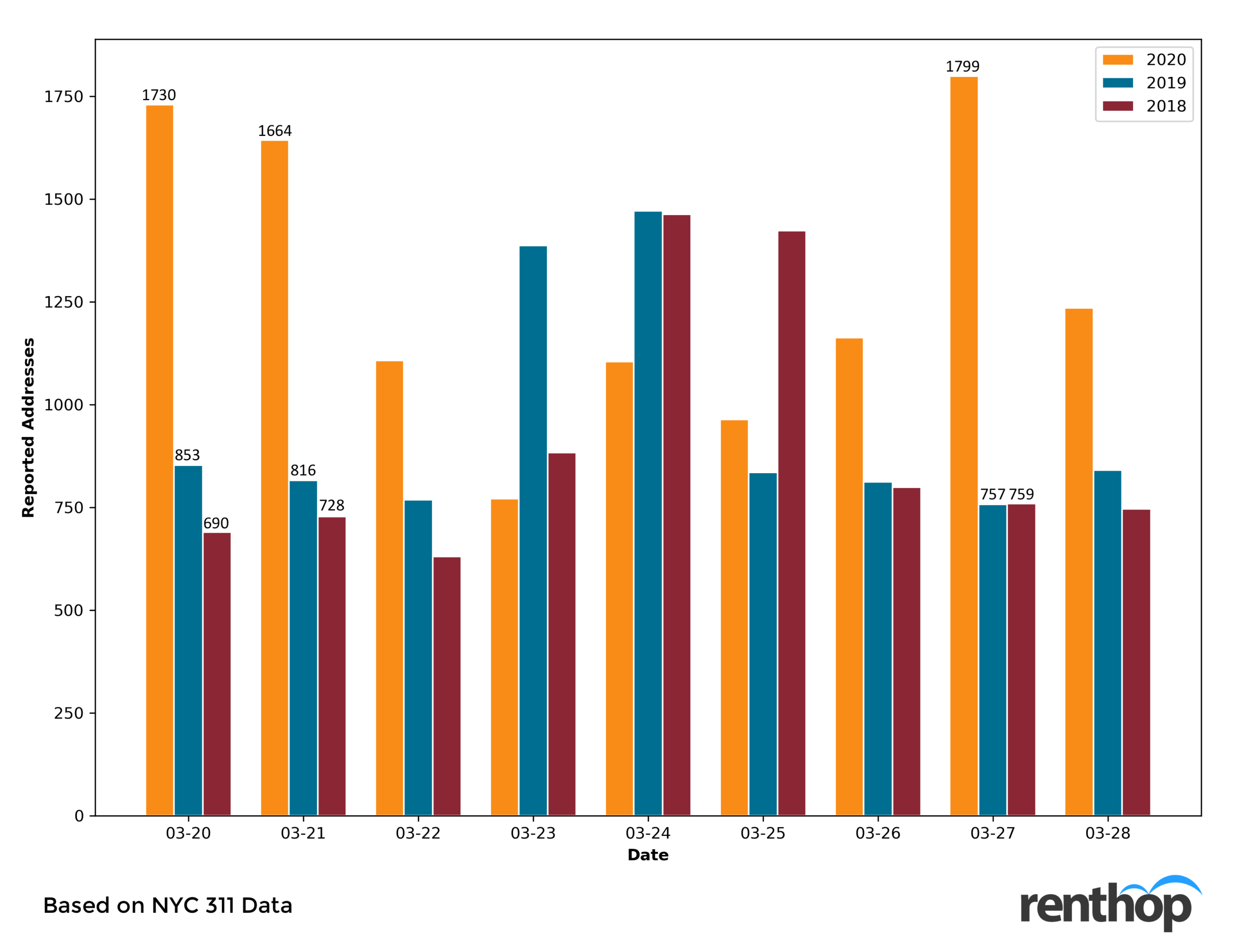 When Are New Yorkers Most Troubled by Noise?

To find out how life in New York might be changing due to the “stay at home” order, we also took a look at the time when complaints were filed. Figure 4 below breaks down the noise complaints by the hour. The orange bars represent the number of complaints by the hour from Mar 20 to Mar 28, 2020, and as one can see, the number of complaints filed during the day increased drastically compared to 2019 and 2018. This will most likely continue until the state lifts the restrictions. 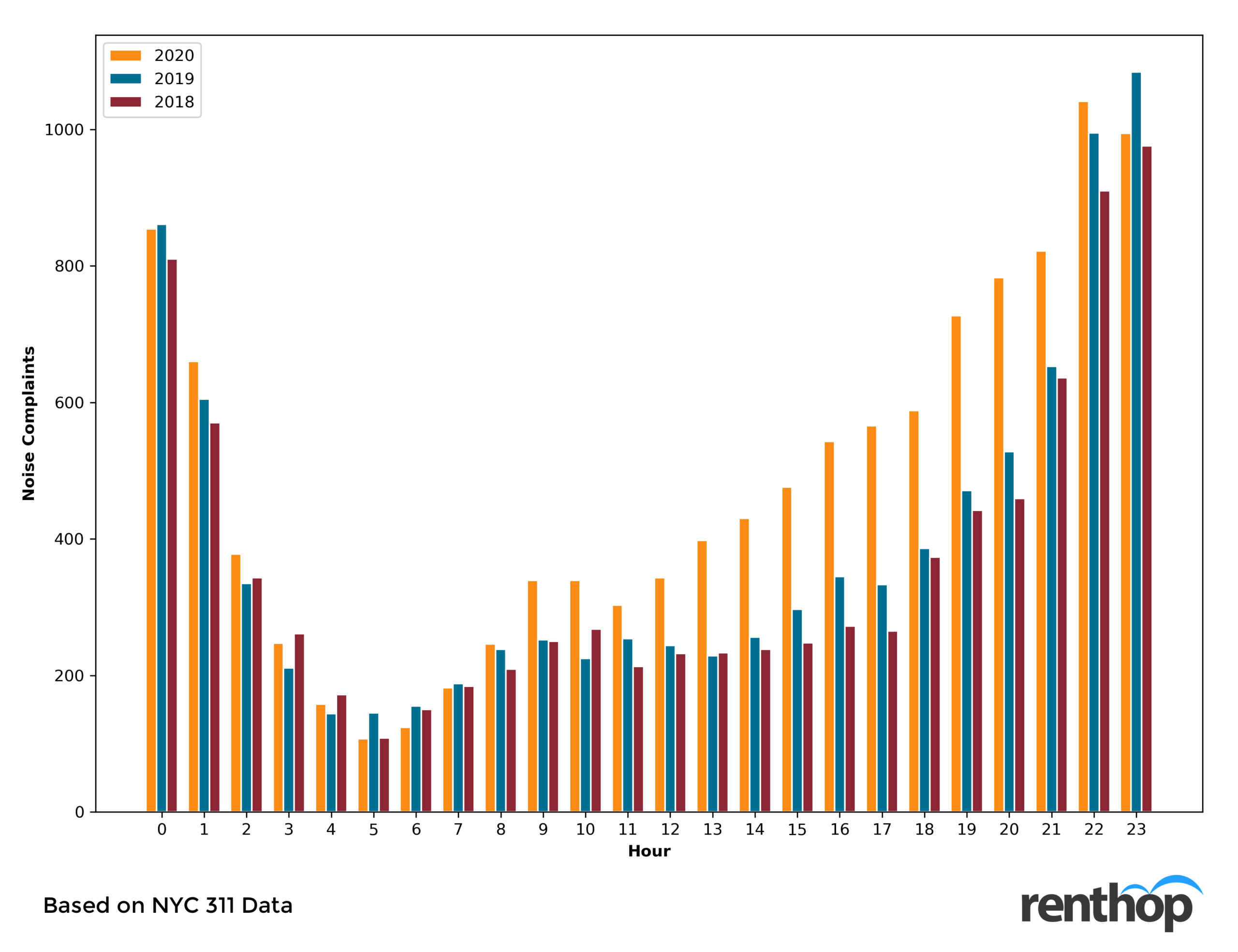 Remember, the New York Tough is about compassion, unity, and love. While noise is good as it shows that people do stay at home, perhaps it is also a great opportunity for us to reflect on our behavior and be more considerate of our neighbors. Besides, just because the number of deaths seems to be slowing down, it does not mean New York has won the battle. The virus could come back (as seen in places such as Hong Kong), and we will have to stay strong and continue with social distancing until we fully stop the spread.

Each year, we at RentHop look into NYC 311 noise complaints with the hope of providing renters with useful information. This year, things are different, and so instead of identifying the quiet neighborhoods, we focused instead on the relationship between noise and COVID-19 and the neighborhoods received the most complaints.

The data was retrieved from the NYC Open Data portal. For this study, we limited the research time frame to March 20 to March 28. This allows us to properly examine the relationship between the state’s “stay at home” order and noise, as well as eliminating potential data loss/updates from the portal. We then geocoded the complaints using the Neighborhood Tabulation Areas Shapefile. Note that some areas were renamed to be more recognized, such as Hell’s Kitchen, which is commonly known as the NTA “Clinton”, and Williamsburg, which is commonly known as the “North Side-South Side” NTA. We also renamed the “Williamsburg” NTA to South Williamsburg. Unlike last year’s study, this year we normalized the data by the number of households in each neighborhood, but the end goal is the same. By normalizing the data by the size of the neighborhoods, we could rank each neighborhood fairly and provide better insights.