Happy 2020! What are your new year’s resolutions for this new and exciting year? Do you want to focus on better work-life balance or save more money? Or maybe, you’re more interested in exploring the world in 2020. With the stress and anxiety caused by the modern busy lifestyle, it is not surprising that many of us choose to focus on health and fitness as our new year’s resolutions. But the question is, how?

The answer lies in where you live and where you spend your time. Chances are if you live in a healthy neighborhood, you will more likely achieve your new year’s health resolutions. What’s better than being surrounded by yoga studios and vegan restaurants if your goal is to go green, celebrate #Veganuary, and improve your posture?

To help you follow through your new year’s resolutions, we at RentHop ranked all NYC neighborhoods by their health score by looking at the number of gyms, yoga studios, other types of fitness facilities, vegetarian and vegan restaurants, as well as juice bars. Since 2020 is also the year of perfect vision, we thought we’d include park coverage by neighborhood in our metrics, as greens are not only for your stomach, they are also for your eyes.

The map below illustrates the “healthiness” of each neighborhood. The greener the shade, the higher the total health score. We also included the rental rates to better assist readers with their apartment search.

Here are the 10 Healthiest Neighborhoods in New York City 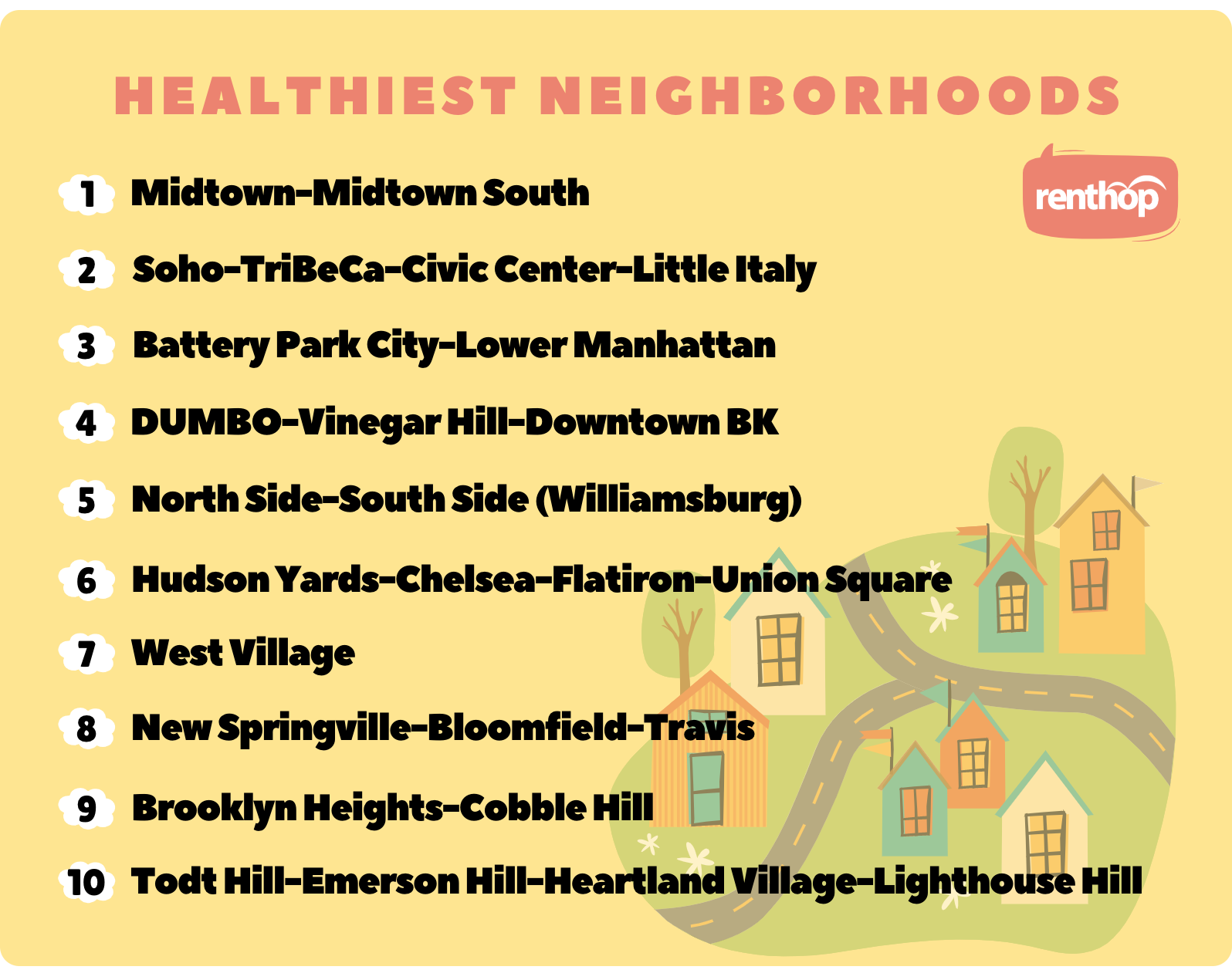 Midtown-Midtown South wins the title “the Healthiest Neighborhood” in NYC with the most plant-based food establishments and gyms. The neighborhood earned a 100 veggie score with 30.1 vegetarian/vegan restaurants per 10K households, and 100 fitness score with 36.3 gyms per 10K households. However, it is not cheap to live in Midtown-Midtown South. With a median 1BR rent of $3,950, it is one of the most expensive neighborhoods in the Big Apple.

People living in Williamsburg (or North Side-South Side according to the Neighborhood Tabulation Areas) should not be surprised to find out that the neighborhood is the fifth healthiest neighborhood. After all, Williamsburg, in recent years, has gone through a striking transformation. It is now one of the most popular and hip neighborhoods in the City of New York.

Todt Hill-Emerson Hill-Heartland Village-Lighthouse Hill in Staten Island made it to our list thanks to its perfect park score. Around 32% of the neighborhood is covered by the park. While the neighborhood performs poorly when it comes to the veggie score, it does have five gyms, making it No. 10 in our study.

Is embracing a plant-based diet your top new year’s resolution? Jumpstart a better lifestyle by celebrating #Veganuary in these neighborhoods.

Want to stay fit in the year 2020? The neighborhoods below have the highest number of gyms on a per 10k household basis.