Over the past few years, New York has been experiencing a residential building boom. In 2016 alone, over 23 thousand new dwelling units (6,900 in Manhattan) were completed. If you’ve been looking for a new apartment, you’ve probably noticed some of the new high-rises that have popped up around the city. Rife with amenities and modern designs, these newer buildings typically charge a premium (especially for units that have never been occupied). But how much of a premium is it to live in newer building vs an older one? What if the building is very old (pre-war)? We explore building age trends across the city to see how they impact rent. We use data from NYC’s PLUTO database along with prevailing market rents (from RentHop [from Q2 2017]).

To better understand how a building’s age affects rental prices, we first look at the distribution of building age across the city. We also isolate the “oldest” and “newest” neighborhoods (by the median age of their residential buildings). To better compare data across neighborhoods/boroughs, we only consider multi-dwelling buildings (3 or more units). It’s important to note that NYC is a pretty old city. The median age of a surviving residential building is nearly 90 years old (obviously, with some renovations along the way). The city’s massive population growth of nearly 63% between 1900 and 1920, contributed to high levels of residential construction during that era. 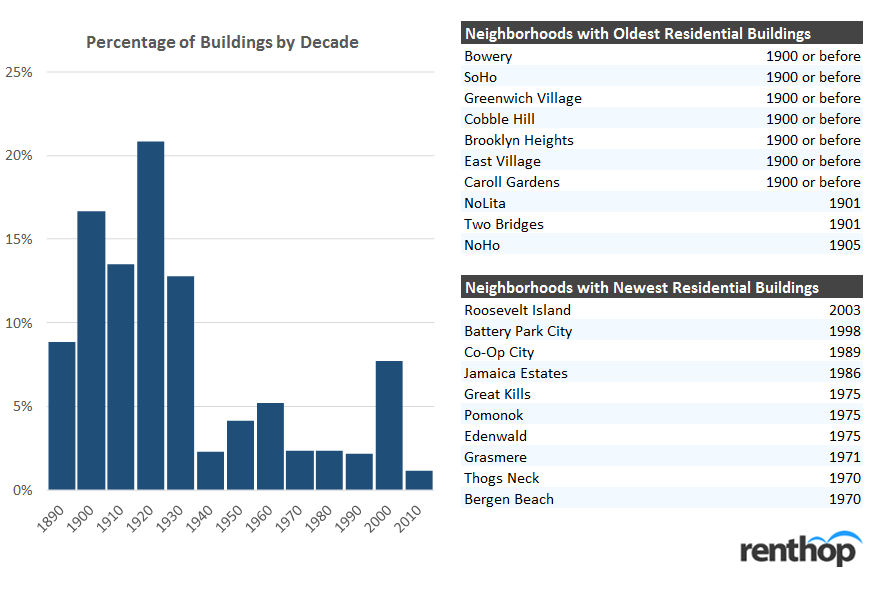 Note: the PLUTO built-year data isn’t perfect, and some years before 1900 may have been rounded to the nearest century

The “oldest” neighborhoods are East Village, Greenwich Village, and Soho. These neighborhoods largely coincide with zones of historical district designation. They also highlight the development pattern of the city itself (which sprawled outwards from the tip of lower Manhattan). The neighborhoods with the newest buildings include Roosevelt Island, Battery Park City, and Co-Op City (along with multiple neighborhoods in Staten Island). Those interested in NYC building age patterns should look to the wonderful map made by Brandon Liu in 2013.

One interesting thing to note, though, is that there is no strong relationship between a neighborhood’s age and median rents in that neighborhood. We plot median 1-bedroom apartment rents against the neighborhood age below.

We see that for elevator buildings, there is even a slight negative relationship between neighborhood’s median building year and price. This relationship may be due to zoning in the historic districts, which make elevator buildings (or newer buildings) particularly coveted in those areas. In fact, there are barely any modern buildings in West Village and Greenwich Village. For walk-ups, we don’t detect much of a relationship at all. However, we do notice that prices tend to decrease as you move more north in Manhattan.

The lack of a strong relationship between prices and neighborhoods suggests that we can’t simply look at buildings and prices across the city, since location and the actual neighborhood matter more.

Though we don’t see much of a relationship between prices and age between neighborhoods, what about prices within neighborhoods? To explore this, we do a deep dive into the neighborhoods of Manhattan. We first find the representative prices of one-bedroom apartments in each building. We then run a simple one-variable regression of building year to prices. To isolate the impact of age, we further segment by neighborhood and only focus on elevator buildings. We focus on elevator buildings because most walk-ups tend to be clustered older and pre-war.

Obviously, this regression is extremely simplistic and doesn’t capture many of the physical differences between newer and older buildings (along with potential differences in quality of amenities). For example, older, pre-war buildings might have older plumbing or fixtures. However, they might also have better flooring and higher ceilings. Certainly, architecture (both external and internal) has changed over time. Regardless, though, the regression does give us an estimate of how newer and older buildings stack up in price. 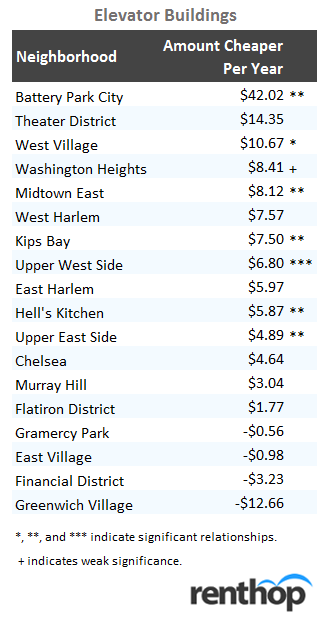 Note: we applied a 5% trim within each neighborhood for outliers. Neighborhoods with fewer than 10 data points were excluded. *’s refer to p-value buckets

Within neighborhoods, we generally see a positive relationship between building year and rent (older buildings are cheaper). Even though this relationship is positive across most of the neighborhoods in Manhattan, we don’t see a strong statistical relationship in every neighborhood. Some neighborhoods (like Flatiron and Gramercy Park) tend to be smaller (in geographical size) or have a lower number of dwelling units available for rent (which impacts the regression). In the case of Greenwich Village and East Village, most of the rental buildings are skewed very old (around the early 1900s). In these cases, there isn’t much of a rent difference between a building built in 1915 versus one built in say, 1930. We also don’t take into account major alterations and potential conversions (for example, old office buildings in FiDi being converted to residential space). In these cases, even though the facade will be pre-war, the actual units will be modern.

On average (across Manhattan neighborhoods), we see that rents are cheaper by $6 per year of age. Given that buildings can be decades old, this difference could be huge. For example, an apartment in a 50-year old building (which is still young by New York standards) might be $300 cheaper than one in a newer building. Given that a median apartment in Manhattan is around $3,100, that’s around 9-10% cheaper.

The one stand-out neighborhood is Battery Park City. BPC is unique in that it’s a very “new” neighborhood (on built year). In fact, the median building age in BPC is 1998 (with almost no pre-war buildings). The newer developments in the neighborhood are significantly more expensive than the older apartments.

So, given what we know about prices and age, how large is the “pre-war discount”? We compare buildings built before 1940 against buildings built after 1940. We also remove neighborhoods where there wasn’t significant post-war rental inventory (such as Greenwich Village and West Village). 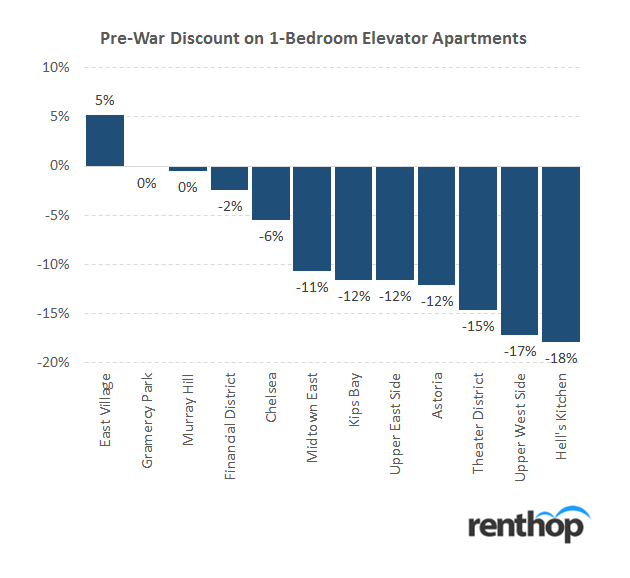 We see that the pre-war discount is actually very large! In fact, in a neighborhood like Hell’s Kitchen, the discount is as much as 18%. We see this discount across most of the neighborhoods in Manhattan, with the average ranging between 10-12%.

If you’re a renter on a budget, you might want to consider living in an older modern or pre-war building. The units themselves might not be as new, but you could potentially save a significant amount of money. As the data shows, pre-war apartments are significantly cheaper than their modern brethren. Some of these pre-war buildings might have also been renovated to have similar amenities as newer buildings (though probably less extravagant). If you’re only looking for modern, luxury buildings, consider slightly older modern buildings. Even a few years could potentially shave off a lot of rent.