Here's Why Rents are So High

Lack of Construction Driving High Rents Across the U.S.

The U.S. economy has been growing at a steady pace, with GDP going up and the unemployment rate falling to 4.1 percent, lowest since January 2007. However, even as headline inflation increased by only 12 percent nationally between 2010 and 2016, the rent and housing subcomponent has increased by over 24 percent. In many major cities, the supply of new housing simply has not kept pace with population and job growth. In fact, the lack of new construction has been cited as one of the many reasons for affordability crises in major cities such as New York, Boston, and Miami, not to mention San Francisco. To examine the impact that housing supply has had on rent growth, we looked at building permits, population, and rent growth between 2010 and 2016 for the top 30 counties in the country. In addition, we took a deeper look at Los Angeles, which has some of the cleanest building permit data.

To determine if supply is meeting demand, we at RentHop looked at census population growth (Census and American Community Survey) and HUD building permit data between 2010 and 2016. We defined the level of “housing tightness” in a county as the ratio of population growth to building permits (pop/permit). If population in a county is growing significantly faster than the supply of new housing, we expect the mismatch to put upward pressure on rents.

Of course, the pop/permit ratio is not the only way of assessing housing tightness. One of the most popular metrics is the job growth per permit ratio. However, while that ratio is a strong predictor of rent growth over longer period of time (10+ years), it seems to be much weaker over a shorter six-year timeframe. The 08-09 recession distorted the job growth data during the early phases of the recovery in 2010. Certain counties experienced significantly higher unemployment spikes (and hence, much larger job growth throughout the 2010 to 2016 period). However, this job growth does not really reflect the labor slack (or housing slack) in the area.

To better understand housing tightness, we first looked at population per permit across the largest 30 counties (and their corresponding cities) in the US and ranked them. 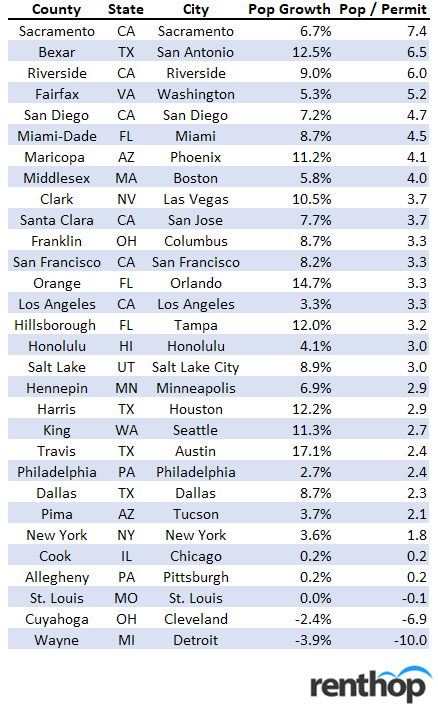 Between 2010 and 2016, the counties (and their respective cities) with the highest pop/permit ratios are Sacramento, San Antonio, Riverside, and Fairfax (Washington Metro). Sacramento is especially underbuilt, with over 7.4 people per building permit. Construction in San Antonio, Riverside, and Washington have also not kept pace relative to population, with pop/permit ratios of 6.5, 6.0, 5.2 respectively. Cities in California seem particularly tight in general. While California (the most populous state) has six counties in the largest 30 national counties, all of them are in the top 50th percentile in pop/permit. This might not be very surprising, since California has often been associated with NIMBY behavior.

On the other end of the spectrum, we found that many counties have somewhat kept pace with their rapid population growth. Even though Houston, Seattle, and Austin logged double-digit population growths since 2010, they have kept their pop/permit ratios below 3 (though still higher than the national average of roughly 2.6 people per household). Among the top 30 counties, Wayne County (Detroit) is the only county experiencing a negative population growth from 2010 to 2016.

What is the impact of this tightness on rent? To explore this, we compared the pop/permit level to the growth in rents. 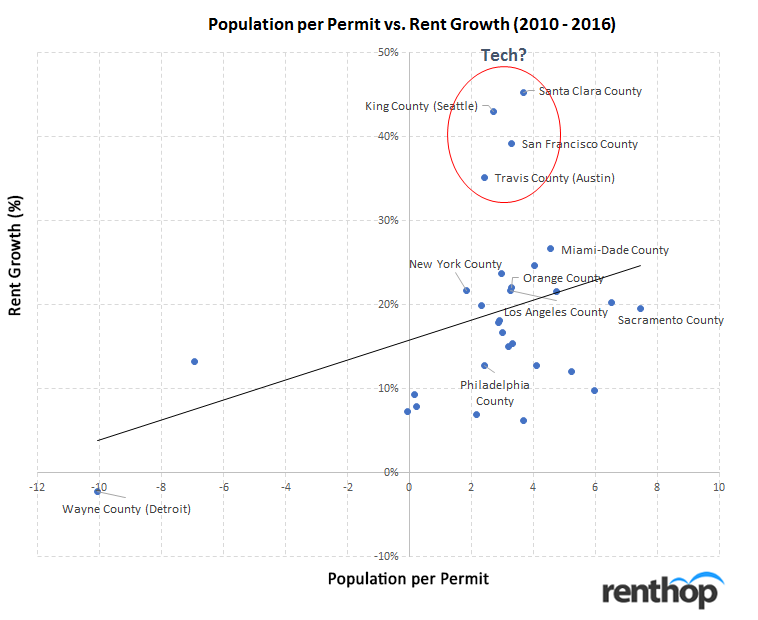 We found that on average, each additional pop/permit resulted in roughly a 1.2 percent increase (off of a 15.8 percent baseline growth) over the 6-year period. While 1.2 percent might not seem like a lot, it can make a huge difference in especially tight areas. Sacramento (with a pop/permit ratio of 7.4) had nearly 20 percent rent-growth versus Wayne county (Detroit) which experienced negative rent growth.

Unsurprisingly, we found that the relationship between pop/permit and housing tightness is not perfect (at least among the top 30 counties). On top of simple population-based supply and demand, other economic factors significantly impact rental prices. These include local income changes/economic growth, accessibility of the central business districts, availability of public transit/commute difficulty, etc. For example, we noticed massive rent growth in areas like San Jose, Seattle, San Francisco, and Austin (even though pop/permit is not huge). These are likely more related to the booming tech industry than simply housing supply in those areas. This is not to say that residential housing is not tight in these areas. New construction can certainly relieve some of the pressures on bludgeoning rent growth.

Beyond Census/HUD level data, many cities now release highly granular building permit data. In particular, the City of Los Angeles has provided building permit data since 2013. The data includes not only permits for new buildings, but also data for upgrades and alterations, such as electrical, plumbing, etc. In addition to details about units, zip codes, and location, the city has also provided in-depth project value data. Note that the data only covers the City of Los Angeles and not the entire county.

We first looked at where construction has been concentrated, as well as the general value of the project over time. The 2017 YTD data (especially) gives a pretty decent indication on where new housing supply will likely pop up in 2018 and later (since it takes roughly one year between permit and occupancy).

We saw that a majority of the new residential units have (and will) be concentrated in the downtown L.A. area (even adjusting for population). The downtown area has experienced nearly 50-100 units built per 1000 population level every year for the last three years. This is somewhat expected, though, because Downtown Los Angeles area is in the top 20th percentile of most expensive neighborhoods in the metro area (not including beachfront properties and Beverly Hills). We also noticed that much of the new residential inventory permissioned and constructed tend to be in the luxury range. The construction value of the projects (for multifamily buildings with 5+ units) are in the $150 – $200 thousand/unit range. While this building of new luxury inventory might not be affordable to most people in the area, it does put level of downwards pressure on nearby older buildings. 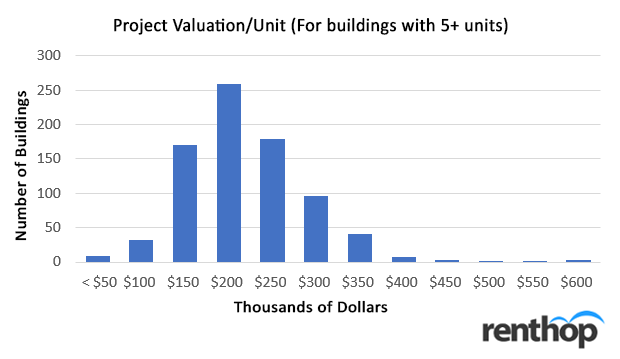 Next, we looked at how much this new construction has potentially impacted rents. Unlike the county-level view we took in the previous section, it is much more difficult to connect households, permits, and rental growth on a zip-code level. While residents might be constrained by their county/city (due to their jobs), they are not as constrained by zip code. If one neighborhood becomes way too expensive, they can simply move to an adjacent neighborhood (or even farther away and add commute time). Consequently, we could no longer rely on the change in a zip code’s population. Instead, we looked at units built/level of population in that zip code and compare that to rent changes. We bucketed the zip codes into percentiles (for units/recent population level) and looked at the average rent change based on how much inventory has been built. 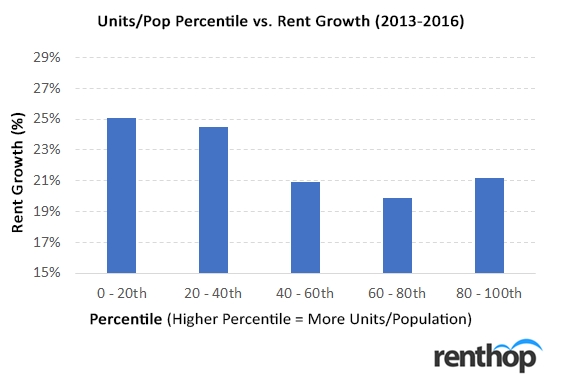 Building permits shed light on housing supply, and thus help us better understand the changes in rental prices. It is no secret that population growth has a huge impact on housing, and when supply does not meet demand, the housing prices go up. Across the top 30 counties in the U.S., the number of population has been on the rise (except for Wayne County, Detroit), and yet housing supply is not meeting the growth. Even though developers have been building more (as numbers of building permits in each county all went up between 2010 to 2016), it seems that they focus more on the high-end housing options. Eventually we might see urban population expands to surrounding areas, such as Manhattan vs. outer boroughs, San Francisco vs. Oakland, San Ramon, etc., offsetting the rent growth in major counties and their respective cities. However, rents will most likely continue to go up in the coming years.