Typically Blue California is Showing a lot of Red

As we enter the home stretch on this election cycle, the only thing left to do is vote (seriously, get out and vote!). We’ve been bombarded with scandals, controversies, and conspiracies. As Hillary and the Donald go pantsuit to “hair”, we’ve been left with a hunger for some cold hard data. As a data-driven real estate startup, RentHop recognizes the magnitude of the situation. Not only will renters and brokers be affected, but as half the country simultaneously moves to Canada, rent prices may finally decrease! We feel it is our duty to lend some of our data science muscle and weigh in on this nightmare.

The map and graph below show the share of unique donors each candidate has in zip codes across Southern California. The drop down list allows you to type in a zip code or county. You can also click a zip code on the map. Purple areas are where neither Clinton nor Trump have more than 55% of the donors. Light blue and light red represent areas where the candidate has 55-70% of the donors, and dark blue or red represents a 70+% majority.

As you can see, Hillary is holding it down pretty well across most of central LA, but as soon as we look north or east, support for her wavers. Hillary’s 80% lead in the more populous LA county does outweigh the many areas where Trump is leading, but it’s still a relatively close race for such a deep blue state.

Some interesting facts about the surrounding LA area

The data for this study was provided by the Federal Election Commission (FEC.gov). Here, disclosures for all campaigns can be found, documenting every dollar in and out. The most recent disclosure, dated October 21, 2016, contains nearly 6 million lines of donor data, since the beginning of the election cycle. We’ve chosen to rank zip codes by donor counts instead of dollar amounts, as we feel this better represents how many people support each candidate.

Here are a few LA Zip Codes Where Hillary is Untouchable

There are quite a few zip codes where Mrs. Clinton has 100% of the donors, but most had 10 or less donors. The same is true for Mr. Trump.

Donald has a Huge Lead in These LA Zip Codes

To calculate unique donors, we combed through 5.9 million donations, looking at the names, dates, and zip codes. We removed common prefixes (Dr., Mr., Mrs, Ms,) that are often added accidentally or inconsistently across forms, and shortened 9-digit zip codes to 5 digits, since some candidates weren’t collecting the longer version, and many people don’t know theirs. People that have changed their names or moved in between donations could artificially inflate these numbers. After grouping donations from the same name and zip code together, we found there were just over 1.3 million unique donors between all candidates. 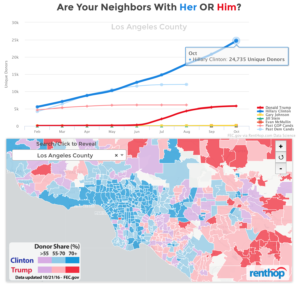