Is Your Neighborhood Becoming More Dangerous?

According to the most recent FBI UCR Crimes in the United States report for the period from January 2019 to June 2019, the number of violent crimes per 10,000 population dropped 7% from 48.0 to 44.6. However, compared to other major U.S. cities, such as New York (26.07 crimes/10k pop) and Los Angeles (35.33 crimes/10k pop), Chicago still has one of the highest crime rates. It is no wonder many people are now leaving their homes after decades in Chicago. With attention focused on shootings and gun crimes in Chicago, RentHop’s data science team has taken a look at violent crime in the city to gather insights about how one can evaluate neighborhoods in the context of violent crime.

Our key findings this year include: 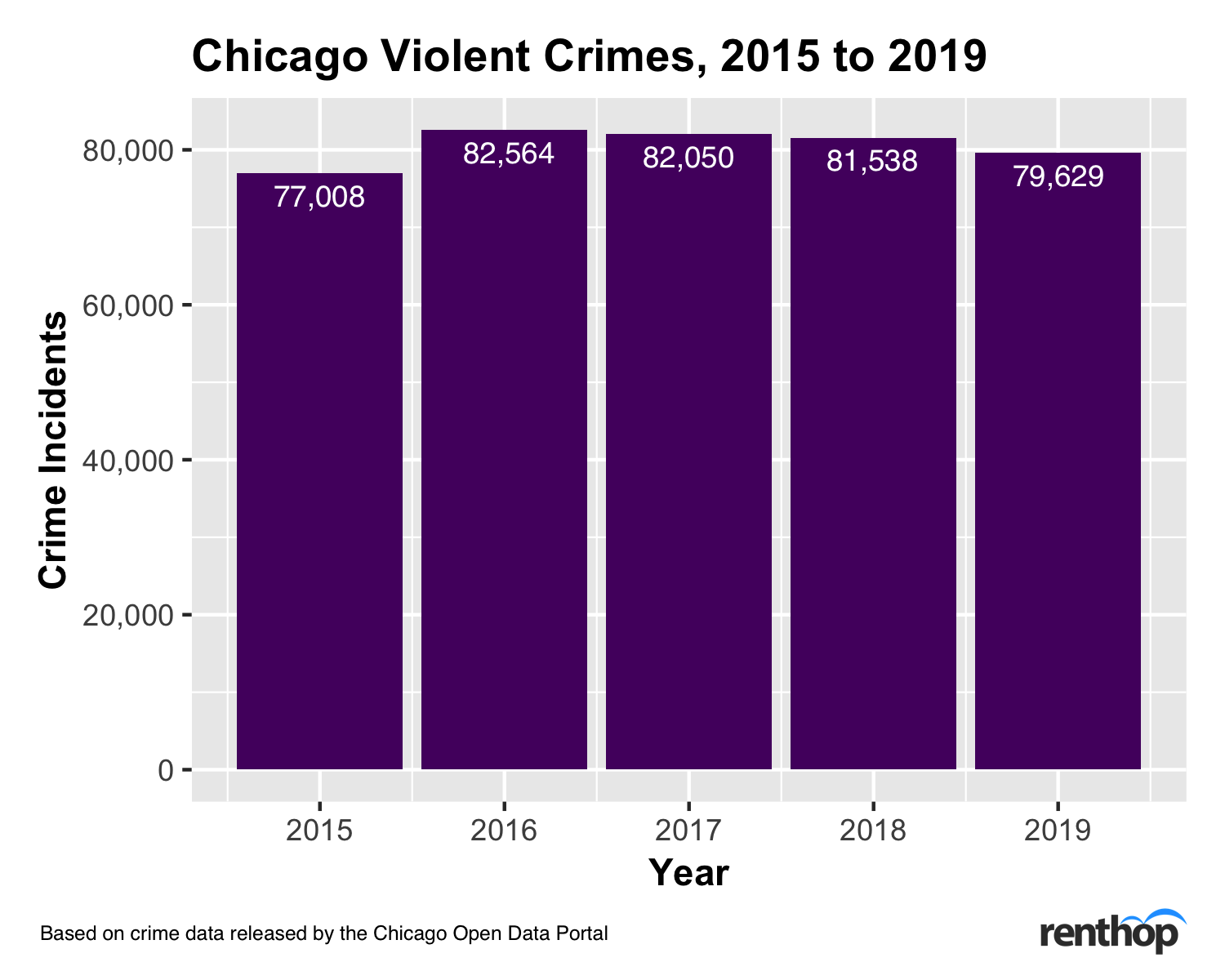 Is Your Neighborhood Safe Enough?

The interactive map below shows violent crimes in 2019 along with neighborhood statistics such as population and median 1BR rent. The darker the shade, the higher the crime rate. Note that, in order to rank the neighborhoods impartially, we normalized the crime data by the population count in each neighborhood. Why did we do that? Hypothetically, neighborhoods with denser populations might see more criminal activities and normalization allows us to fairly compare the number of crimes from different neighborhoods.

We can tell from the shades that the north part of the city appears to be safer with fewer crimes reported. However, it doesn’t look like there’s a significant correlation between crime rates and proximity to the city center. Englewood, Fuller Park, and West Garfield Park, among others, had more violent crimes/10k pop in the past year. Meanwhile, Forest Glen, Mount Greenwood, and Norwood Park are some of the safest places in Chicago. The orange clusters show the locations of all violent crimes reported in 2019. Click on the neighborhoods to learn more, and you can reset the map by clicking on the ‘reset’ button in the upper left corner.

These are the Most Dangerous Neighborhoods in Chicago

These are the Safest Neighborhoods in Chicago

While Crimes Are in Decline, these Neighborhoods Have Become More Dangerous

These Neighborhoods Have Become Safer

What Kind of Neighborhood is Safer?

In addition to geographical location, we also looked at a few other factors that may affect crime rates. While we didn’t find any correlation between rental rates and crime rates, we found that, in Chicago, there’s a positive correlation (roughly 28%) between neighborhood crime rates and the number of rented units of all occupied housing units within a neighborhood. In other words, the more rented units there are in a neighborhood, the more crimes were reported by residents. Many scholars and research institutions have emphasized the social benefits of stable housing, and that rings true based on what we’ve found in Chicago. 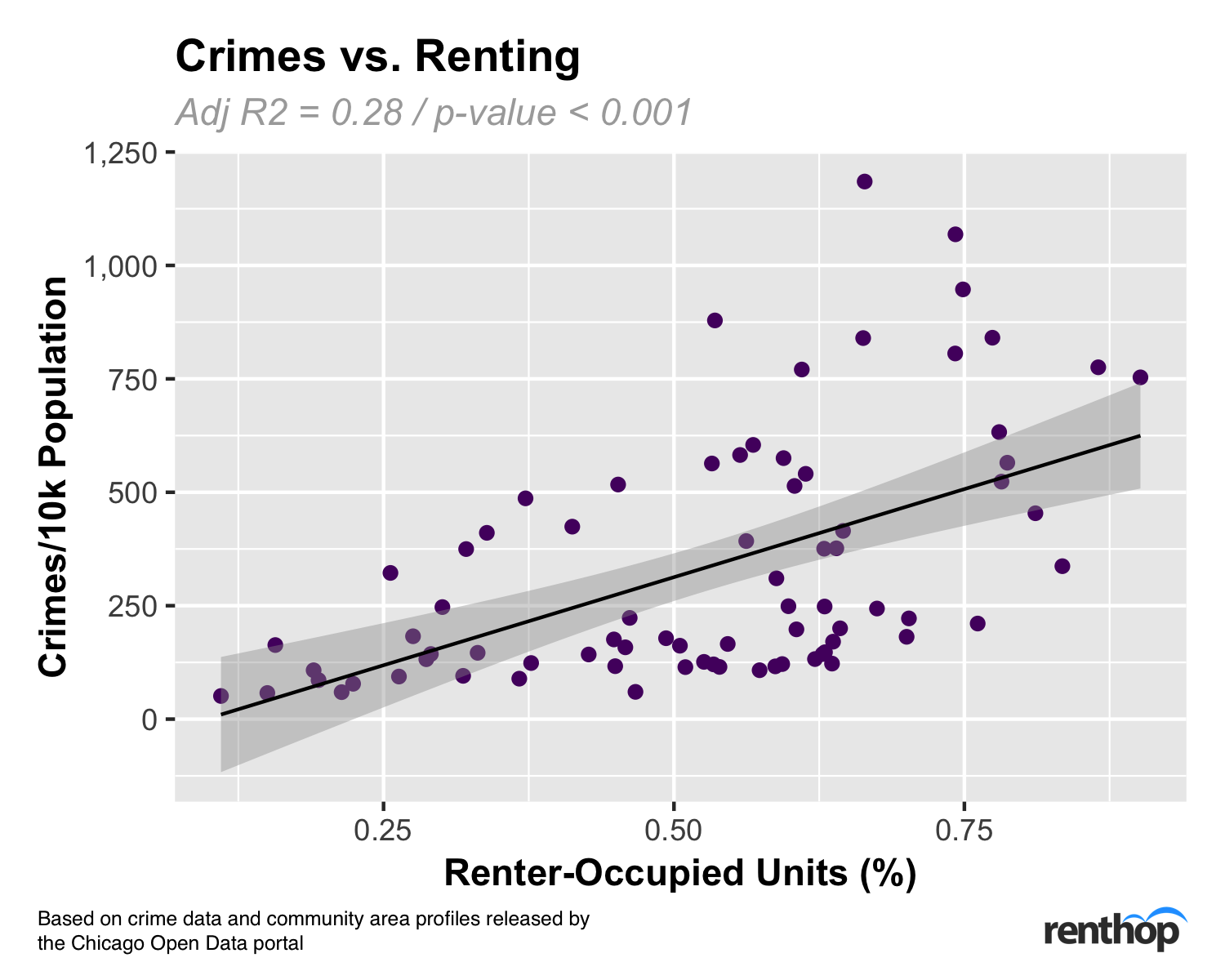 To better understand crimes in Chicago, we pulled the crime data made public by the Chicago Police Department via the Chcago Open Data portal. For this study, violent crimes mainly include homicide, robbery, assault, battery, kidnapping, and criminal sexual assault. We first removed duplicates based on time, date, type of crime, and location, and then geocoded each reported crime to corresponding neighborhoods using the coordinates provided by the open data portal. Other neighborhood information, including population count and renter-occupied units, was retrieved from the community data snapshots.

What Does it Mean for You?

Finding the right place to live is not easy, especially when you have to consider safety, unit availability, monthly rent, commute, etc. by analyzing the reported crime incidents in Chicago and median 1BR rent, we at RentHop believe that we better serve all renters, especially those who care about safety. After all, no one should live in fear.