Chicago - How Safe Is Your Neighborhood?

Chicago has been considered a dangerous city in many respects since as early as the 1960s and, in many years, has been considered the “murder capital” of the United States. Despite the city’s effort to combat crimes, public safety continues to be the top #1 concern of many residents in Chicago. One minute we hear the Police Department announce that the crime volume has been in decline in recent months, and the next minute we see notifications popping up on our phones about shootings and homicides (remember the four shootings on September 1st?).

To better understand the criminal activity in Chicago, we at RentHop looked into the crime data released by the Chicago Police Department, and here are our key findings:

Crimes in Chicago – Where Does Your Neighborhood Stand?

We can tell from the shades that the north part of the city appears to be safer with fewer crimes reported. However, it doesn’t look like there’s a significant correlation between crime rates and proximity to the city center. The Loop, Fuller Park, West Garfield Park, and Washington Park, among others, have more average yearly crimes per 1,000 population. Meanwhile, Forest Glen, Edison Park, and Norwood Park are some of the safest places in Chicago. The orange clusters show the locations of all crimes reported in 2018. Click on the neighborhoods to learn more, and you can reset the map by clicking on the ‘reset’ button in the upper left corner.

Violent Crime Volume Went Up in These Neighborhoods in 2018

Property Crime Volume Went Up in These Neighborhoods in 2018

What Kind of Neighborhoods is Safer?

In addition to geographical location, we also looked at a few other factors that may affect crime rates. We found that, in Chicago, there’s a positive correlation (roughly 30%) between neighborhood crime rates and the number of rented units of all occupied housing units within a neighborhood. In other words, the more rented units there are in a neighborhood, the more crimes were reported by residents. Many scholars and research institutions have emphasized the social benefits of stable housing, and that rings true based on what we’ve found in Chicago. 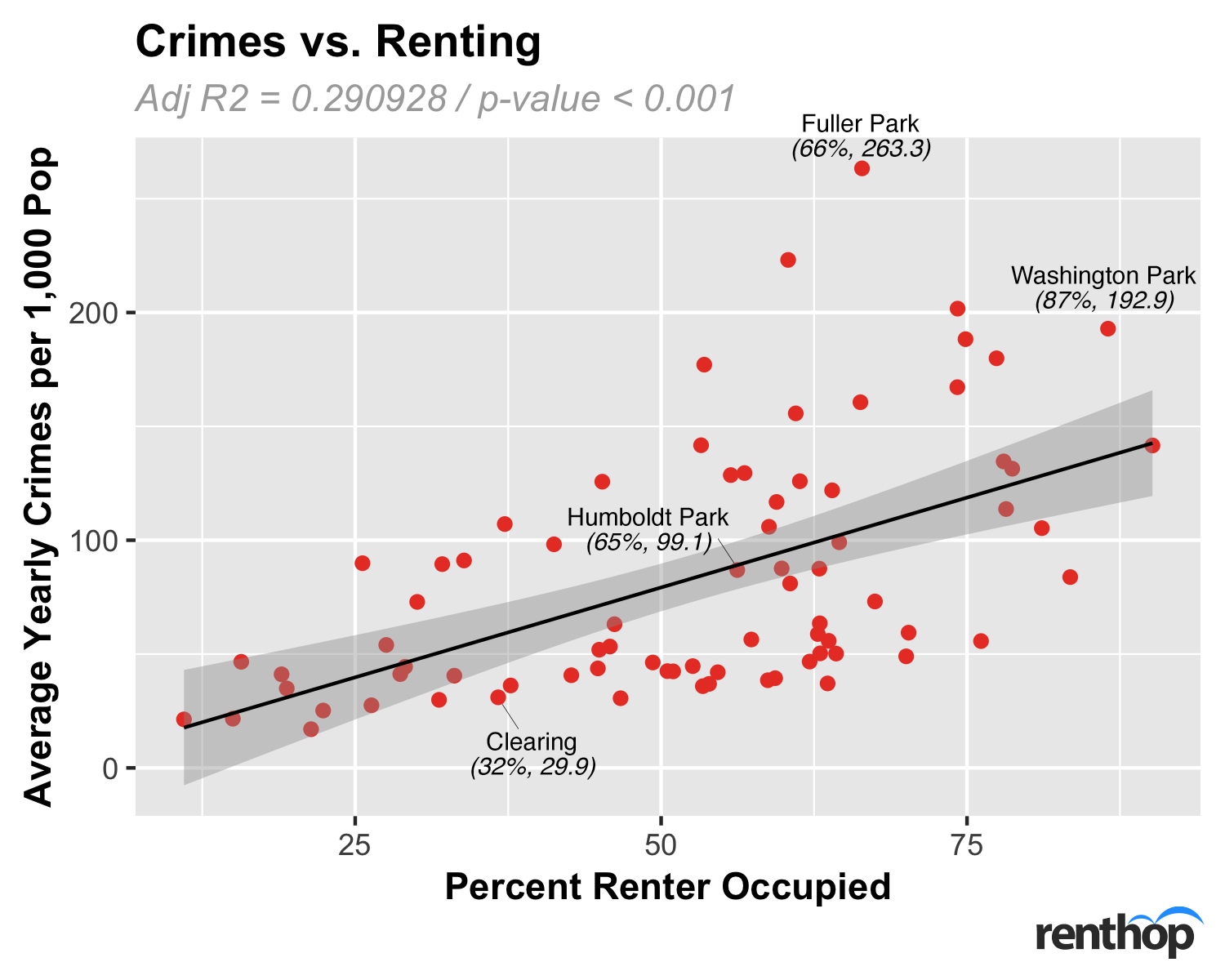 What You Need to Know to Stay Safe

In addition to geographical location and relationship between crimes and renting, we also broke down reported crimes by day of the week, month, and time of the day. Below is an infographic for easy-sharing, which summarizes our findings.

To better understand crimes in Chicago, we pulled the crime data made public by the Chicago Police Department. For this study, violent crimes mainly include homicide, robbery, assault, battery, kidnapping, and criminal sexual assault. Property crimes mainly include arson, larceny/theft, burglary, and motor vehicle theft. We first removed duplicates based on time, date, type of crime, and location, and then geocoded each reported crime to corresponding neighborhoods using the coordinates provided by the open data portal. Other neighborhood information, including population count, number of households, renter-occupied units, etc., was retrieved from the community data snapshots.