Over the past 108 years Chicago has really changed, but some things will always be the same. Needing a place to live is one of those things, and we’ve found it wasn’t nearly as easy as it is today to find an apartment in 1908. There was no RentHop, or Craigslist, or internet whatsoever, so people relied on word of mouth and newspapers like The Chicago Tribune. To get an idea of what it would be like finding an apartment during the second most recent time the Cubs won the World Series, we took a look at about 300 old Chicago Tribune classified ads, starting with the date the Cubs won the World Series, October 15, 1908.

Check out our findings in the graphic below: 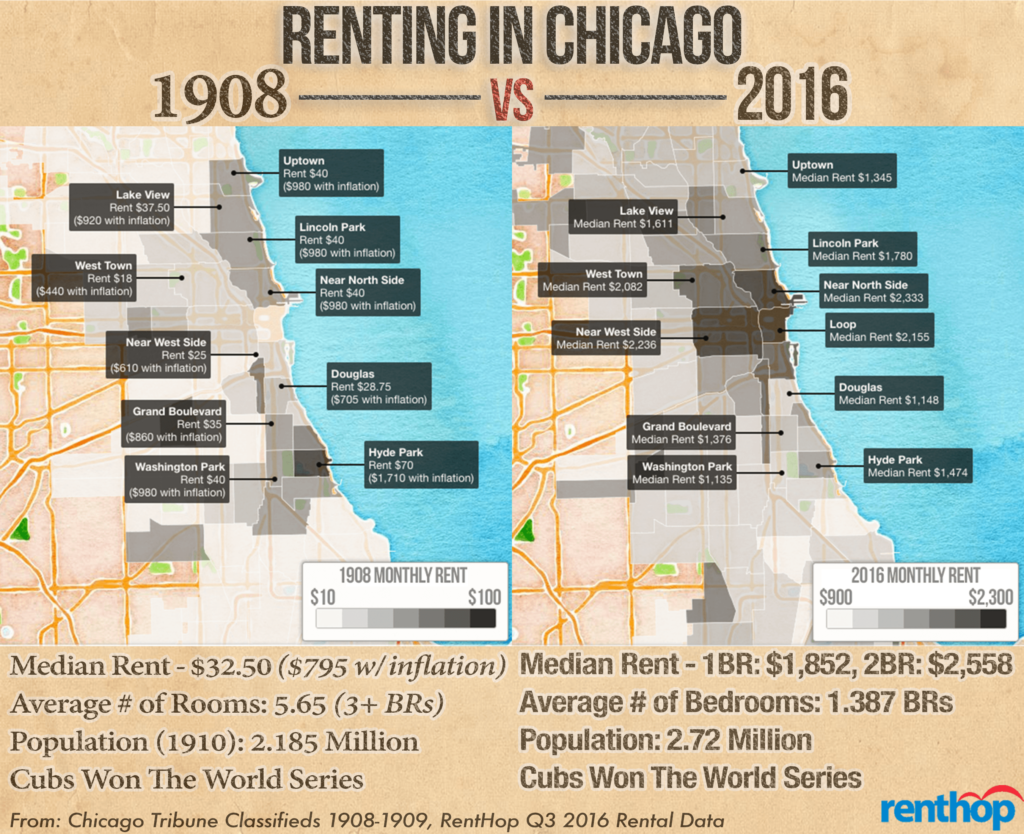 The foremost thing we noticed was that apartments were significantly bigger, on average, than they are now, with most listings having at least 5 rooms, and often as many as 7 or 8. In todays terms, one could expect a 5 room apartment to have 2-3 bedrooms in addition to a kitchen, dining room, and living room or two. That compares to an average listed apartment having 1.387 bedrooms in 2016.

We also found that there were very few to no listings in the Loop area, as it was even more a business district then than it is today. The most listed neighborhood in 1908 was the Near West Side, where median rent was only $25 per month, or about $610 in today’s dollars, calculated using the consumer price index developed in 1913.

Across the board, prices were significantly less, when adjusted for inflation, than they are today, with Hyde Park standing out as being more expensive back then. There is certainly a margin or error, as our sample size for 1908 apartment listings is significantly less than the 50,000+ listings we used to calculate 2016 prices.

There were proportionally more listings for southern Chicago neighborhoods like Douglas and Grand Crossing than there are today. In the Chicago of yesteryear, the South Side was a more popular place to live, with lots of new developments, according to the supply and price of rental listings in 1908.

The population of Chicago hardly grew between 1908 and 2016 with just about a 25% increase, although the suburbs filled in quite a bit more. This compares to New York City where population almost doubled in that time period, and Los Angeles that grew 11-fold.

Lastly, we noticed the sports teams of Chicago remained consistently awesome, with a world series winning baseball team known as ‘The Cubs’ giving people reason to celebrate for over a 100 years.