The Madness of Boston Move-In Day

If you don’t live in Boston, you probably don’t know about the struggles students and local residents face during the dreaded move-in period. Every year, between late August and early September, new and returning students move into dorms or new apartments near the city’s universities. While moving week is a common occurrence every year, that doesn’t dampen the annoyance of dealing with streets flooded with furniture, traffic delays, finding alternative routes to work, etc.

We looked at the data provided by the City of Boston for street occupancy permits. For this study, we used publicly available data on Boston’s moving truck permits, made available on Boston’s open data hub. The data provides us with the issued moving truck permits for dates up to September 16, 2022. We focused exclusively on the expiration dates of the moving truck permits (which generally coincide with the actual moving dates) instead of the permit issuance dates. You can only apply online for a permit if your moving date is at least two weeks away and no more than a month away. However, because we are looking at when these moving permits expire, additional permits may be registered between now and your move-in day, so long as potential movers fit the above criteria.

The map above closely examines the daily number of issued moving truck permits from August 1, 2022, to September 16, 2022. This map will be a great tool for those looking to check out if their neighborhood will be particularly affected by students and all of their “baggage” during specific dates. By looking more specifically at the individual dates, we see that the following dates have higher spikes than others. This is due to permits ending on those dates. The top six dates for 2022, where permits will expire or have expired, are:

From the data provided, it is safe to say that there is a relationship between the number of issued permits and the move-in period for new and returning students in Boston. Looking at the number of issued moving truck permits back from January 2018 to September 2022, this is how the numbers are divided. 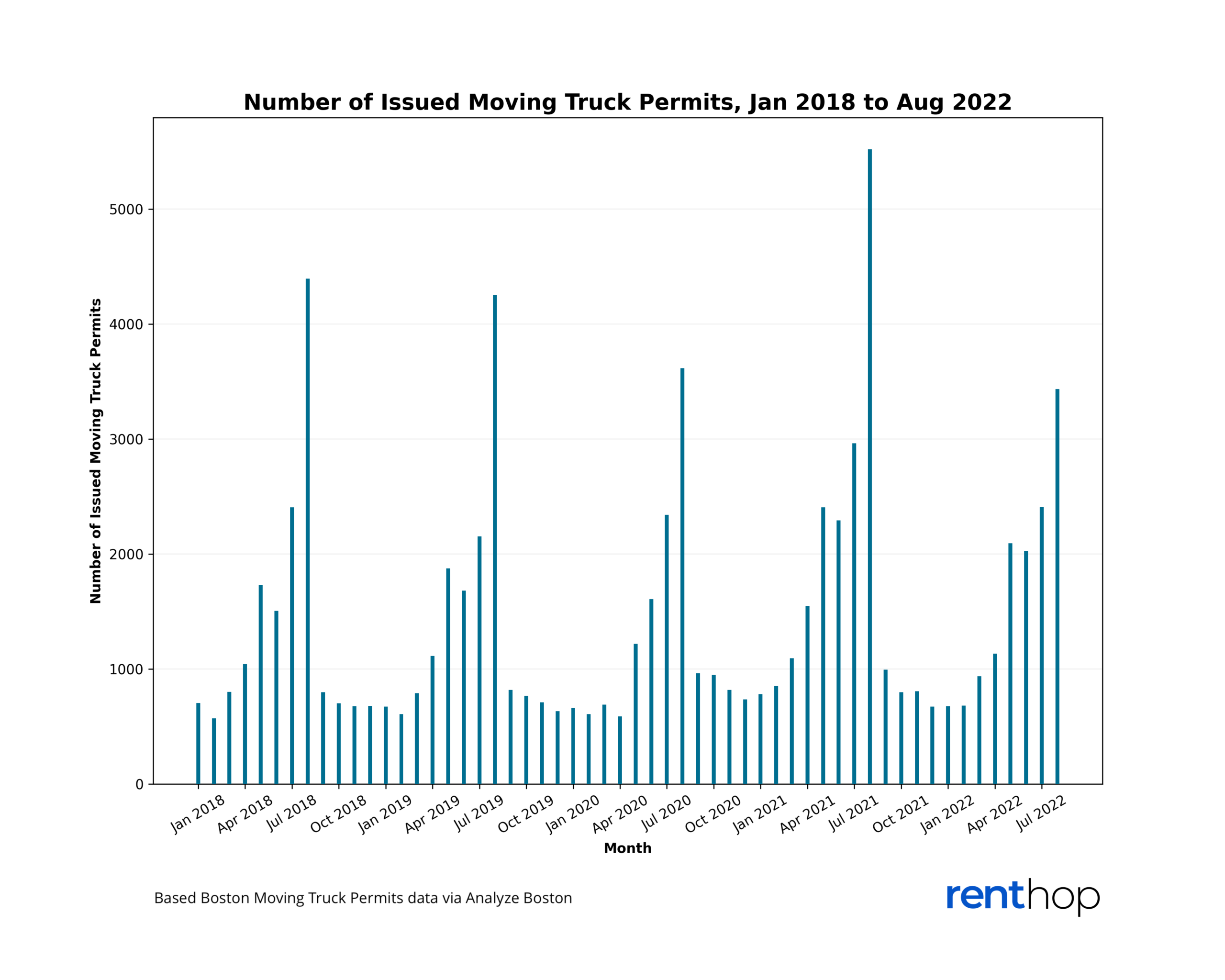 The table above looks at the number of expired moving truck permits in the past five years. August 2021 ranks the highest, with 3,257 issued permits. August remains the top month with the most issued permits, with August occupying five out of the ten spots for the top ten months.

So which areas are the worst to commute in around the move-in period? For you to know which area to avoid, we took a deeper look at the zip codes attached to the issued moving truck permits as well. Knowing which zip codes are the busiest might help you plan ahead if you’re one of those affected by the move-in period when commuting to work, the gym, etc. We ranked the top ten busiest zip codes based on the number of issued permits.

If you have a school or university near where you live, you probably already know there will be more traffic than usual around the move-in period. But exactly when is the move-in dates for your local university or school? It might be worth checking the academic calendar to ensure you mark the dates that your area will be busier than usual. Here are just a couple of move-in dates for Boston schools and universities coming up in the next couple of weeks, based on the academic calendar for 2019.

Check the embedded map to find alternative routes to the gym, the store, or work. Take a minute to map out some paths other than your normal route if you can see from the map that it might be rather busy. No one wants to get stuck in the middle of a traffic jam or behind a big moving truck on a narrow road. Research the route before heading out to save yourself from a headache.

Despite all your best efforts and planning, delays and annoyances will be impossible to avoid. Especially in a city as close-quartered as most of Boston is, a single vehicle being out of place or stopped for too long can cause some major issues. As a result, you should give yourself more time every day to account for the potential delays. While you might miss out on the delays, you planned for and be very early to work or class, that is better than not giving yourself that extra time and hitting a delay, making yourself very late.

While this tip isn’t so much about helping you avoid the madness that is Boston Move-In Day, it can make it much more manageable for you. There is a high chance of your commute or drive being disrupted somehow due to the moving trucks. Instead of thinking you will get through without a hitch and then getting upset or angry when you get stopped, expect and accept that it is likely to happen. Simply expecting to be disrupted by the madness will make it less bad when it occurs, and if it doesn’t, you will feel like you just hit the jackpot.

While many will avoid this area at all costs, some deliberately look to go to these areas around move-in day. The reasoning for this is “Allston Christmas.” For those unfamiliar, Allston Christmas is the period around move-in day when many people move in and out of apartments. While most furniture will make it into a U-Haul or an apartment, there are always some just left on the street, free for anyone to take. So instead of treating this whole ordeal as a disturbance, treat it as an opportunity. There is a good chance you can find some pretty cool things simply lying on the sidewalk or in the street.