How Chivalrous Is Your Boston Neighborhood?

It’s that time again. The wedding invitations are hitting your mailbox and you’re forced to watch as your friends are getting hitched. Not that you’re not happy for them, but when is it your turn? Maybe you’re single or maybe you’ve been committed for four years (pop the question already, buddy..). No matter your relationship status, everyone deserves a little romance in their life, and nothing says romance like flowers (or diamonds, but let’s be realistic).

To give you a hand finding your chivalrous partner, the RentHop data science team has calculated the “flowerage” in the Greater Boston Area. Want some special attention? Knowing where the romantics live might be helpful.

For the study we used data shared by 1-800Flowers subsidiary: Florists.com, “a gifting company that was founded on two principles: affordability and reliability.” Approximately two years of data was used, from August 2014 – July 2016. The data does not include purchases by chivalrous men and women from other flower delivery services and local florists.

We used the data to find out who spends the most on flowers, who receives the most flowers, who buys the most expensive flowers, and who are the lucky ones receiving them. Want to know where the big spenders live? Think it will make a difference to your love life if you moved? Let’s see! 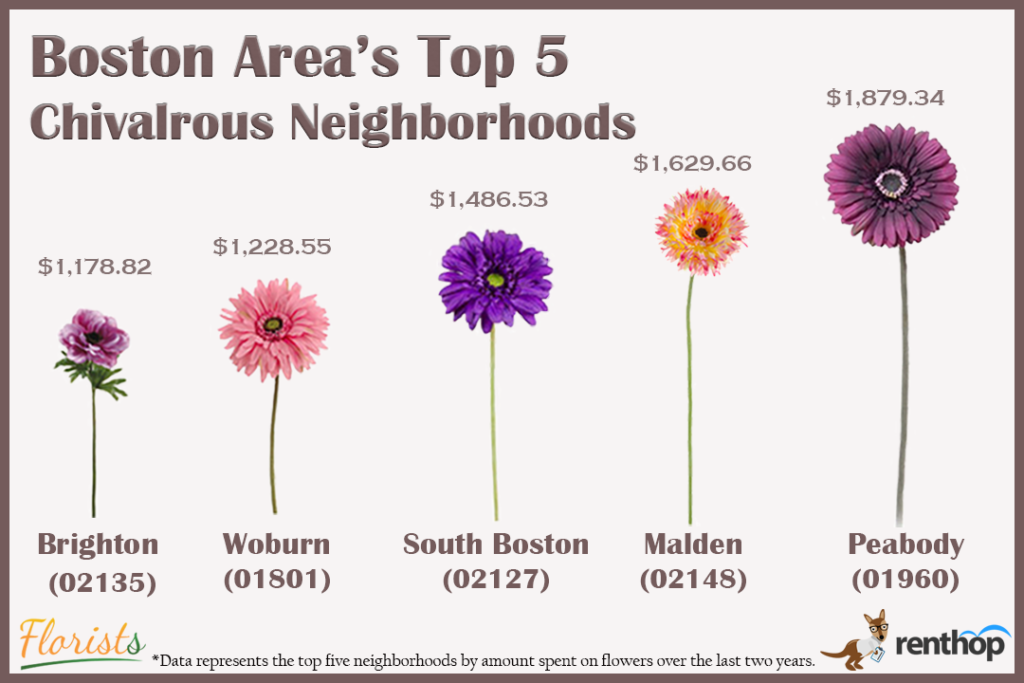 Missing some romance in your life? The graphic above shows the top five zip codes that spent the most money on flowers over the past two years. As the graphic reveals, the outskirts of Boston can be considered the biggest spenders. Zip Code 01960, which makes up the city of Peabody, is the number one spender with a spending of $1,879.34.

Now that we know who spends the most on flowers, let’s find out who receives the most. According to the data from Florists.com, we discovered that the suburbs not only spent the most but also received the most flowers.The Peabody Zip Code of 01960 collected a total of $2,060.60 in various flower gifts. In other words, Peabody must be a rather romantic (and aromatic) city to live in. The runner up flower receiver was Fenway / Kenmore (02115) receiving a value of $1,750.12 in flowers. According to the data from Florists.com, some neighborhoods have a tendency to spend a bit more on their flower orders. The graphic above shows the top five Zip Codes with the highest average price on their orders. Back Bay (02199) spent the most, with an average billed order of $102.98. Which isn’t surprising, seeing as the neighborhood is known for being the home of politicians and other public figures that have the resources to spend a decent amount on flowers. Having your significant other live in a top spending zip code might mean some pretty nice flowers for you.

So who’s on the receiving end of the most expensive flower orders? For those receiving the largest average orders the winner was the town of Littleton (01460). Which is rather charming since the town’s population hasn’t even reached 9,000 yet. The highest average orders vary between $74-96 in price.

To summarize the data provided by Florists.com, Peabody (01960) has received and purchased the majority of flower orders. The highest average orders were placed in Back Bay while the highest average orders have been shipped to Littleton. So if you’re looking for a special someone willing to buy you some pretty flowers on a regular basis you might find the residents from the big spending zip codes being your best candidates.