Everyone knows that finding apartments is best done in the winter. Or is it? The common wisdom is that there are fewer people choosing to move during the colder, holiday months, and more people moving during the summer months prior to commencing school or work. Unexpected vacancies, on the other hand, can appear all year long, between job changes, family emergencies, and evictions. In theory, the winter imbalance creates a shortage of eligible renters, more desperate landlords, lower rents, and other beneficial concessions such as months free. On the surface the theory makes sense, but exactly how strong is the impact, and does it apply equally nationwide? Do cities filled with colleges and investment banks have larger seasonal differences? How much can we actually save if we go through the trouble of hauling our couches on Christmas Eve? In this data study, we explore the monthly differences in median 1-bedroom asking rents in ten distinct metro areas.

To start, we examine New York City, the country's largest rental market and arguably one of the most diverse populations and income ranges. The dozens of local colleges and universities graduate tens of thousands of students every spring, from undergraduates to PhD's and everything in between. Powerful corporations relocate large incoming junior employees each summer, almost all of them given the title Analyst or Associate. And while not quite as harsh as some of the cities deep in New England, New Yorkers face a large weather differential from warm, 80-degree summers to blizzard-filled winters (some of which leave the city filled with un-shoveled sidewalks). If any city should have a large seasonal differential, NYC would be the one. 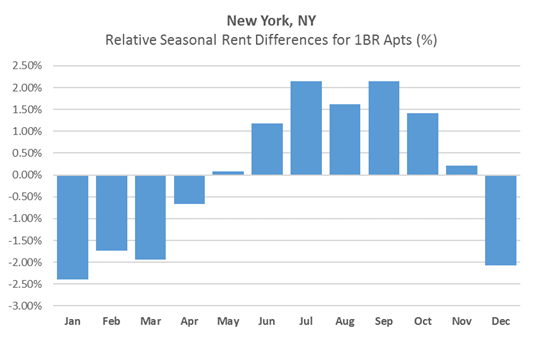 As we dive into the data, we certainly see a wide price difference between the peak and off-peak months. Rents are lowest in December and January, and highest during July, August, and September. The difference between July and January is nearly 4.5%: for a $3,100 one-bedroom apartment, that's about $140 a month. The seasonal transition is also quite clear: where April, May and November have no significant deviation from the yearlong median, other months show a large discount or premium. Probably the most surprising result is that the discount off-peak season can last as late as March before prices rise again. To explain this impact, we note again that these prices reflect asking rents. Landlords can further add more concessions, such as free months of rent or paid broker fees. Renters may also negotiate the rental price if the market is soft enough. Therefore, the truly best deals should be right in the heart of December and January, when both the asking rents are lower and your bargaining power the strongest.

The takeaway is obvious. If you have the luxury of choosing when to move, absolutely avoid the summer rush, where you bid against newly-minted investment bankers, management consultants, quantitative analysts, all starting work at the same time, many with their relocation fees paid by HR (including broker fees). After May, rents will be high all the way until November (we have previously reported that November is one of the best times in the year to search for apartments in New York City). With New York out of the way, how do other cities look in terms of seasonal impact?

Los Angeles has an interesting seasonality graph. Like NYC, the best deals will be in the winter months, November, December, and January, maybe less from the cold and more from the density of holidays and other reasons not to schedule a move. However, the peak season starts earlier around April and ends sooner in October. Probably most interesting of all, there is a spike right at September, possibly marking a specific month where lots of leases suddenly turnover. 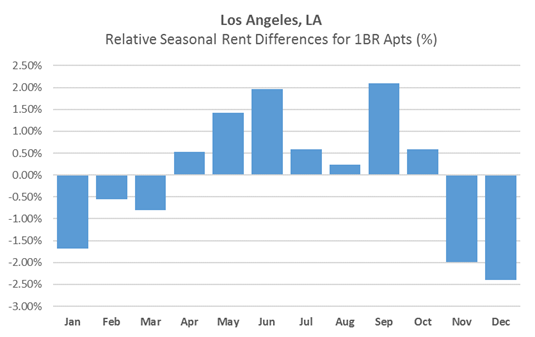 Shifting to Chicago, we interestingly see half the NYC pattern: a large incoming batch of junior graduates, all at the same time, probably push up prices in August, September, and October. However, the most interesting part of Chicago is that the off-peak season lasts pretty much half the year, from December all the way through May! It would seem there is less of a graduation impact and just a large desire to move from June onwards rather than the first 5 months of the year. 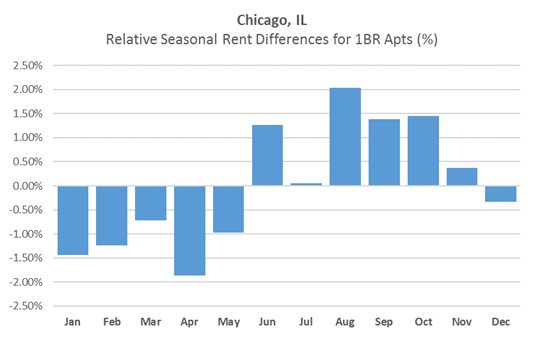 The most extreme difference occurs in Miami, with a 4.5% premium for only two months in May and June, then a discount of about 2% from September all the way through January. Again, these representing asking rent prices, so we shouldn't be too quick to jump to conclusions, but there must be some compelling reasons to cause such a huge seasonal shift. Obviously, the Miami area contains a lot of seasonal housing and short-term rentals, but all of our data draws from landlords seeking 12-month or longer leases. Still, the supply and demand dynamics of short-term housing or even Airbnb offerings must have some causal impact on the long term rental market. 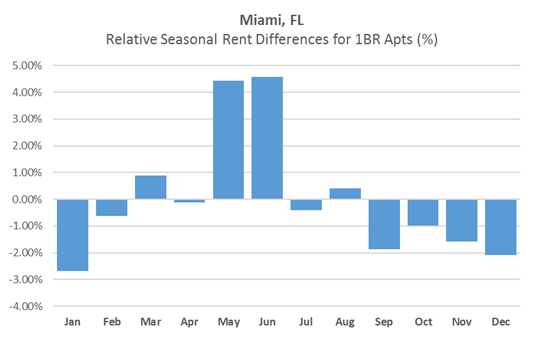 As we look at other cities, the same general patterns always hold. The peak months cluster around summer or warmer seasons, with more pronounced impact in cities with added microstructure or demographic pressure such as college graduation, tourism trends, or employment dates. The off-peak months universally include December and the nearby months, sometimes for quite a long time into the spring. As always, renters should be cognizant of the market and season as they hunt for apartments to rent, as it impacts your ability to negotiate or find alternatives. Better yet, try hard to time your next rental search so that you move in November or December! That can often be done by asking for an 18 month lease this year, which puts your next renewal into an off cycle. Even if you decide to stay put and renew in the winter (and please insist on 12 months), your landlord is less likely to ask for a large rent increase! 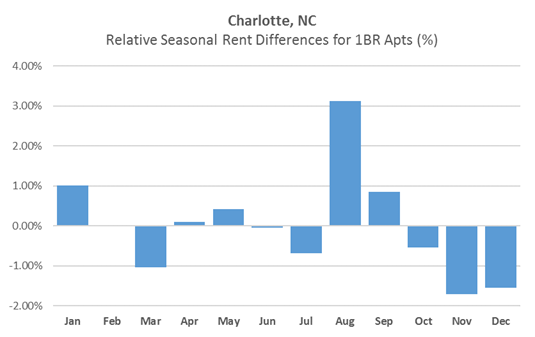 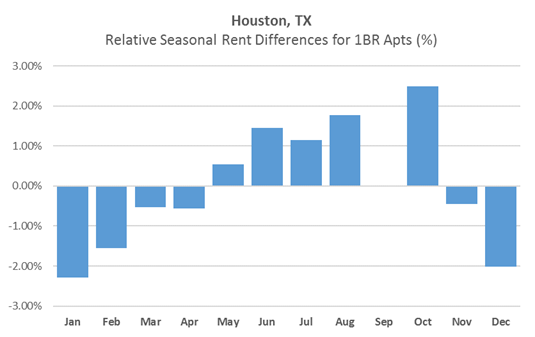 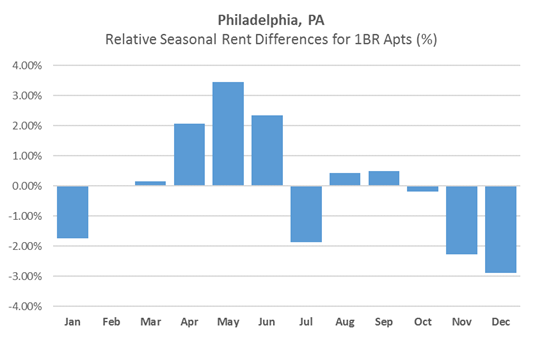 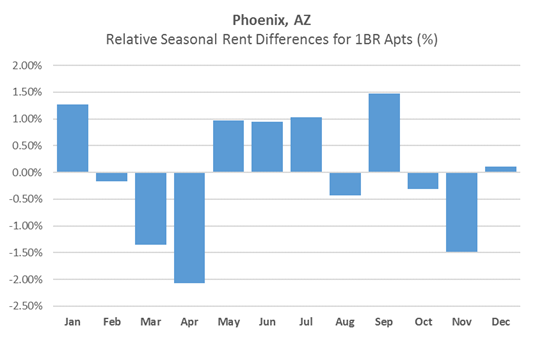 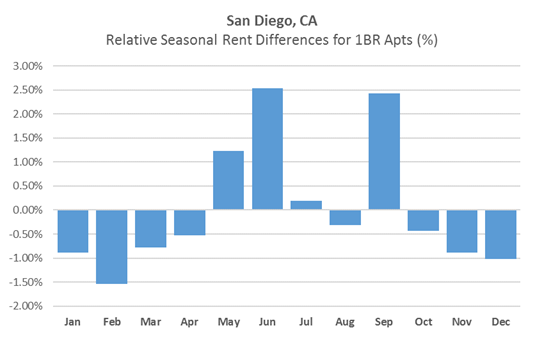