Close your eyes and think of your least favorite things. If the 'T' and your monthly rent come to mind, then you're in for a treat. The RentHop data science team has put together a map of median rents for one-bedroom apartments across all the subway lines. We cross-referenced our apartment listings to train entrance locations, taking the median of apartments within 500 meters. We set a minimum threshold of 50 listings for calculating each median, incrementally expanding the radius around a subway stop if too few listings were returned. To prevent apartments that were listed multiple times, like open listings, from innacurately affecting the stats, we grouped duplicated listings.

Thinking of living near Central Square instead of Harvard Square or MIT? Last year that would have been a cheaper option, but not anymore, rent jumped 9% near Central Square, while remained relatively the same nearer to both campuses. We found that an extra stop on the Orange line past Tufts Medical can save you $150 a month. Moving to Copley instead of Arlington on the Green can save $100 a month. Trekking to Andrew instead of Broadway on the Red is worth over $400 a month, and another $300+ if you choose to live near JFK/UMass. Moving across the river on the Blue line can save you about $300 a month. 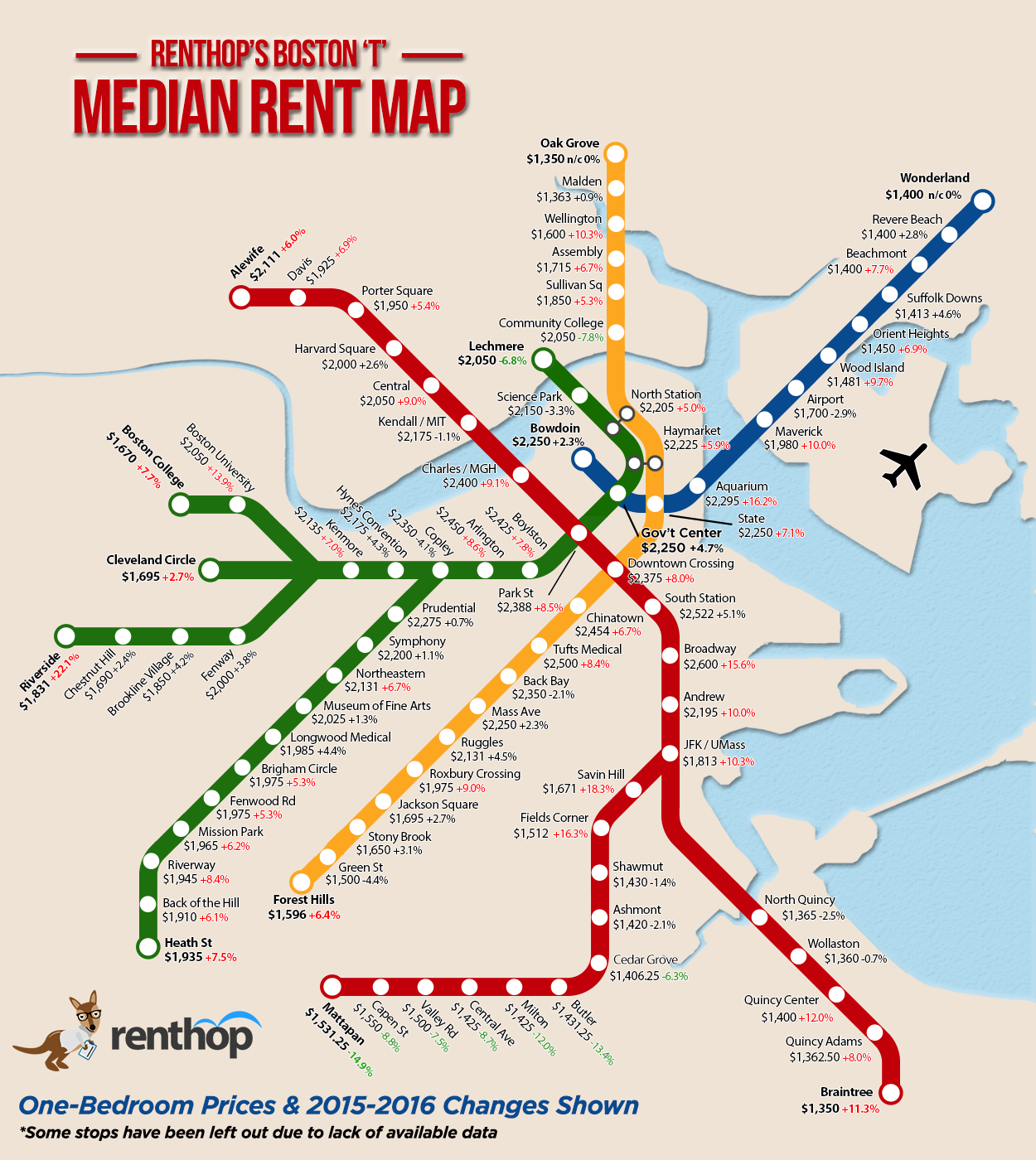 You may have noticed a few stops are missing from the map, we're not geographically challenged, we promise. We just didn't have enough rental data in these areas to make a confident claim about the prices.


Would you commute for extra cash?

It's no surprise that as you get farther away from Downtown Boston, the rent goes down as well. When choosing a neighborhood and prices are high, we're often forced to think about more than just the location. Many of us are willing to give up on Back Bay in favor of something a little more affordable, but what if you could save $300 per month by traveling a few stops away? While you might really want to live off Arlington, you could save a little over $400 a month by moving down a few stops and settling in by Northeastern or the Museum of Fine Arts stop.

The rent at these stops really jumped!

As one might expect, most prices have increased since last year, but some seem to have increased disproportionately. Blue Line stops were pretty unanimous in their increases, as well as the Green Line and the Red Line non-inclusive of the Mattapan branch.

These stops had significant price drops

While it often feels like all the prices in Boston are going up and up, not all of them are. There are actually a few places where rent has come down over the past year. We saw a lot of dropping prices along the Mattapan branch of the Red Line, from Cedar Grove all the way out to Mattapan. This is certainly not the norm though and has us wondering why. There could be other factors at play, including increased development and a greater number of brokers working these areas. Here are some other stops that have seen price drops:

Don't settle for less than you deserve

In a city with such a diversity of people and choices there's no reason one should feel as though they don't have a choice. A little information goes a long way, and here at RentHop, we want to give you as much information and as many choices as you can handle. When calculating where to live, think about how much your commute is worth to you. It may be hard to hold on to the perfect neighborhood if you're saving $1,200 a year to live 10 minutes further away and even harder if you're saving $3,600 a year. When it comes down to it, you have to weigh the importance of location with how much you value your time.

If you’re in the market for a new apartment, or were just influenced to move because of this study, be sure to check out the extensive selection of Boston apartments for rent.