Where are the bike lanes in New York?

We’ve entered the season of recreational biking so here at RentHop we thought we’d make a guide for all you pedal pushers out there. We’ve been wondering what the best neighborhoods are for biking. We looked at Citi Bike data and the Department of Transportation’s data to analyze the best neighborhoods with regards to Citi Bike docks, number of bikes per 1000 people, and bike-able areas (bike-able areas are both bike lanes and bike paths).

But first, a little history. The very first bike lane was built on Ocean Parkway in 1894. By 2015, New York City reached over 1,000 miles of bike lanes in the city and half of those were built between 2007 and 2015. Citi Bike began in May 2013 with 332 stations in Manhattan, all south of 59th Street, and in Brooklyn north of Atlantic avenue and west of Nostrand, with bikes totaling to 6,000. For summer of 2016, the Citi Bike program has expanded to through Brooklyn and parts of Queens. In 2015, there were over 10 million Citi BIke rides in the city. Unsurprisingly, ridership drops in the colder winter months and rises dramatically in spring and summer.

So which neighborhood wins in its borough?

With its dense crowds, strong smells, and busy street vendors, Chinatown in Manhattan might not seem like it would win first place for bicycling, but it has. The neighborhood itself is small compared to many we’ll be talking about, but at 0.52 square miles, it encompasses 7 miles of bike-able area. After we normalized the data for square miles of the neighborhood, Chinatown had 13.5 bike-able lanes or paths per square mile, making it the most populous bike-able neighborhood in New York City.

And perhaps not surprisingly, Midtown wins for most Citi Bikes. There are 30 Citi Bike stations in midtown with 1,371 bikes, leaving 48 bikes per 1000 people in the neighborhood.

In Brooklyn, Fort Greene wins for both most bike-able areas and most Citi Bikes. It has 10.5 miles per square mile and 18 Citi Bike stations with 540 bikes, which makes 19 bikes per 1000 people in the neighborhood.

Long Island City takes the cake in Queens — Hunter’s point has almost 5 bikes per 1000 people from 11 stations and 312 bikes, and LIC has 6 miles per square mile of bike-able area.

We’ve created a map that visualizes the density of bikeable area per square mile in NYC: 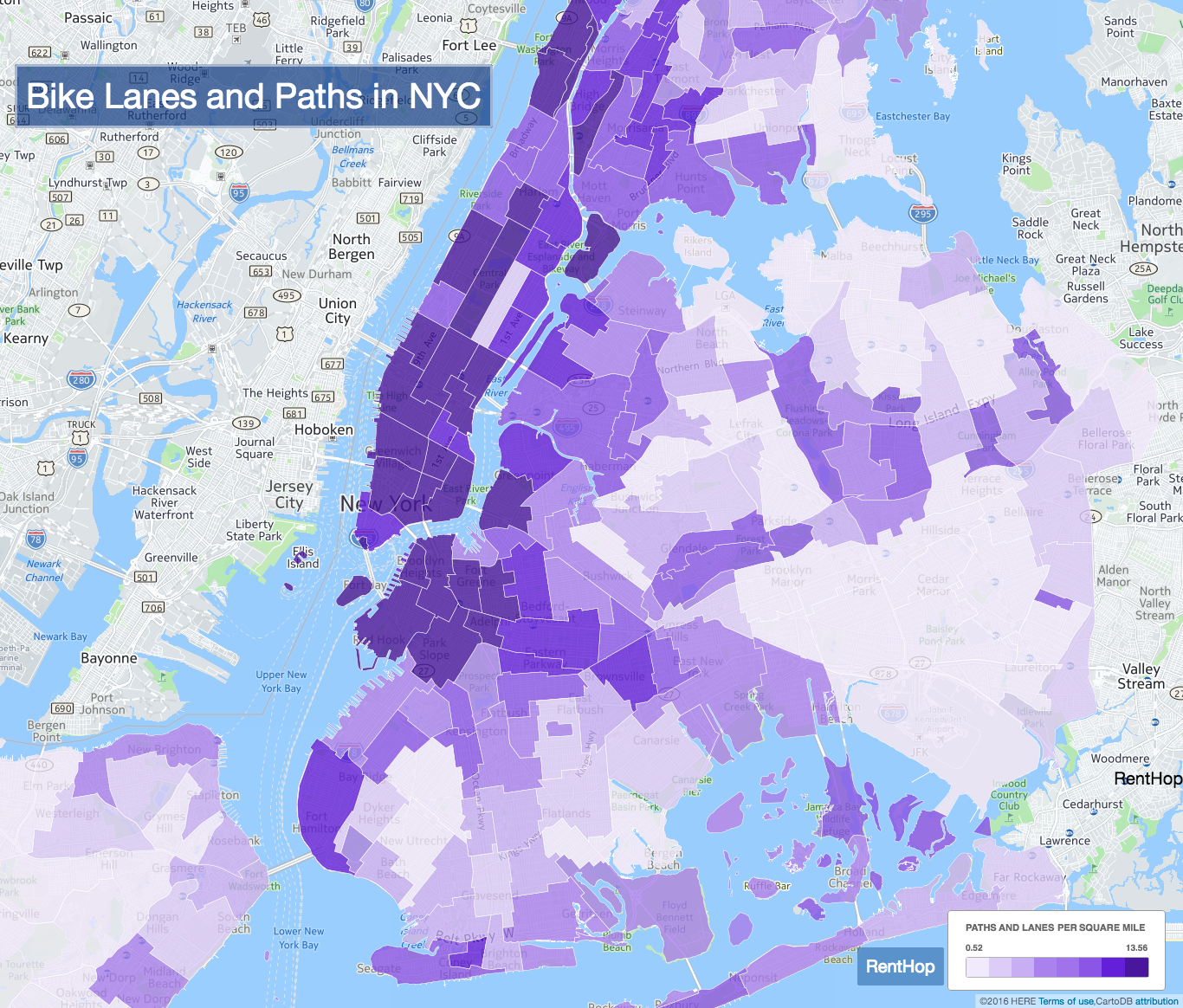