How Compass is Different from Zillow, Redfin, and Typical Brokerages

Compass completed their IPO valuing the company at $7 billion dollars (really $9 billion after accounting for full dilution of all convertibles, warrants, employee stock options, and other derivatives). For all the early investors, it’s a huge win by any measure, reaching both liquidity and 10x unicorn status. Even most late-stage investors should be happy, especially after the prior year’s scares. The 2020 failed WeWork IPO followed by the Covid-19 lockdowns led to a rather large 15% layoff for Compass staff. Founder and CEO Robert Reffkin predicted a 50% drop in revenues and further pain if nationwide real estate prices fall. Of course, a few months later the market stabilized and rebounded to all-time highs, helped in a large part by loose monetary policy and fiscal stimulus.  Many people ask:  what makes Compass different from other public traded real estate giants? Is Compass a brokerage firm valued at many multiples of Realogy and any other brokerage in history? Or is Compass a technology company, comparable to Tesla and Amazon?

Compass gained a tremendous amount of market share in about 8 years of operations. They started solely in New York as Urban Compass, initially hoping to revolutionize the rental market before realizing sales were far more lucrative. In the process, they navigated through multiple game-changing shifts in the industry: a shift to No Fee Brokers and OPs, the rise of the 100% firms, and the mid-sized brokerage squeeze.

For at least a decade prior to the Compass ascent, almost everyone in real estate was talking about the death of the traditional brokerage model. In a world where most leads come from the internet, who needs a fancy office, let alone expensive store frontage?

The New York City market changed drastically, and along the way Compass found itself steering exactly against the tide. Although we focus primarily on NYC firms, similar disruptions happened in many cities and metro areas across the United States.

The 100% Firm and other High Split Models

For a time, a new, light brokerage model seemed inevitable. Light brokerages can offer extremely high commission splits in favor of the agent, relative to the traditional 50% (half to the agent, half to the brokerage). Although sometimes called a 100% firm or high commission split model, in practice the firms offer about 80%, while taking only 20% or less (the ones that say 100% have higher monthly desk fees). The firm fulfills the legal requirement of a brokerage and often provides some technology infrastructure and sometimes shared office space (although it is unlikely. However, the three most fundamental characteristics of a light brokerage are:

To some, the shift seemed inevitable. Remax and Keller Williams were rapidly growing their agents nationwide. In New York City, Charles Rutenberg and Level Group, Pari Passu at the time, were among the first high-split firms. Not long after came Oxford Property Group and Spire Group. All of these firms grew their agent counts to well over 100 in short order.

Compass vs Redfin vs Discount Firms

Note that Compass is absolutely not a high split firm or light brokerage model. They infamously recruited many of their top agents with a high commission split lure, but those deals are designed to be temporary. For example, they promised some agents a 90% commission split for the first year, plus a signing bonus and marketing subsidy that totals 6 figures. However, all of those perks are charged as recruiting and agent costs. Their reported $3.7Bn of revenues includes the commission they would have received on an industry-standard 40% split.

Separately, neither Compass or 100% firms are discount brokerages.  Discount brokerages are a somewhat failed model from the 1990s (Redfin started out this way, but transitioned into something quite different, discussed later). In a discount brokerage, the discount goes to the consumers in terms of a commission rebate. Instead of the usual 6% commission when selling a house, 1% goes back to the buyer or seller when using a discount brokerage. ZipRealty and Foxtons attempted the model in the US, along with many clones that ultimately failed. Quite simply, the firms self-select for lower-performing agents, leading to a downward spiral into a zombie company.

The big losers over the past decade have been mid-sized brokerage firms. These firms are often owned and operated by the founders on a daily basis, boasting high-touch management and about 50 to 200 agents. Their strength lies in specializing in a particular niche, either a few neighborhoods or a specific style of apartment consumer.
The migration from traditional to light brokerages sent shockwaves through the industry. Traditional brokerage competitors took notice, especially in the mid-sized segment. Even some of the most high-touch, centrally managed firms dabbled into high-split experiments. Ardor NY, once a Midtown powerhouse run by Chris Shiamilli and COO Stephen Love, began offering 3 different agent tracks.

The “Entrepreneurial” plan gives 90% and the “Virtual Plan” gives 90% (how do they differ? who knows).  The “Mega Support” model is the traditional, 50% split model, which includes training, subsidized advertising, an experienced mentor, and house leads.
All 3 tracks had access to a firm’s carefully maintained listings database. Unfortunately, only a few years later, Ardor NY folded and liquidated. Back then, most firms offered in-house software and listings database solutions that required a significant labor and capital investment to maintain. Why was it necessary? Newly licensed real estate agent need a way to gain rental leads, and an open listings rental database is essential to the process.
From Day 1, management tells the new agent to pick a neighborhood and spend the day previewing half a dozen open listing apartments for rent. Afterward, the agent compiles all of the photos, notes, and data into advertisements, aka listings, and posts them on consumer websites such as RentHop (for NYC apartments and sublets), RealtyHop (for sales listings), and of course Craigslist (for just about anything). These advertisements become an asset that the agent will continue to use to attract leads and fill their schedule for days to come. If they ever have an empty day, then it’s time to preview more listings.
The listings database is what makes the entire routine possible. Without access to the city’s open listings, and all of the relevant broker blasts, the agent wouldn’t know where to go or what to show. Often an agent develops a good rapport with a customer, but the initial apartment didn’t quite fit their needs. What does an agent do? Consult the listings database to find similar apartments that are more suitable.

With experienced tech founders and lots of VC backing, Compass quickly reached mid-sized status in New York City. However, a key part of their strategy was to recruit top agents AND top technical talent. Top agents would bring the listings exclusives and relationships required to continue recruiting agents. Leonard Steinberg, formerly at Elliman, was the first of many top tier poaches in 2014. Compass also scooped up some proptech stars, such as data scientist Sofia Song from StreetEasy (she left two years later in a major tech restructuring).
One unique difference is Compass’s focus on growing their in-house technology, data analysis, and engineering team. It’s a very major expense in an industry already operating under razor thin margins. One of the core questions for investors following Compass is whether the big bet pays off. Is there enough proprietary technology to justify the cost? Are the agents more efficient or loyal after using the Compass platform, or will they leave once the promotional commission split period is over?
Also, what exactly does the in-house solution provide? Is there some long-term moat that gives them an advantage over other brokerages? Or do they have plans to be more than a brokerage someday?

Enter Nestio, Listings Force by RealtyMX, and You Got Listings

Another innovation in the past decade: the open listings syndication engines. While dozens of mid-sized firms struggle to maintain listings databases and proprietary technology, others opt to outsource to Proptech SaaS vendors. In fact, almost every firm large and small uses multiple vendors – the difference is how much you rely on them.
Is the in-house platform part of the core competency and edge over a 100% firm? If not, for only $99 a month, any agent can get access to a reasonable listings database, ad creation, and syndication platform.

Reasons to be Bearish: Consumer Recognition?

With all of the amazing press Compass has received, it’s surprisingly hard to find real estate consumers who name Compass.com as their preferred real estate search engine. People will say Zillow or Redfin all the time. Some have their own favorite smaller sites. Over the years in NYC, we’ve seen New York bits, Skip the broker, Sherpa, who all had an era of popularity. Of course, there is also StreetEasy and RealtyHop, currently enjoying a strong growth spurt.
Somehow, Compass never enters the radar, unless consumers found the agent first on another portal. That’s an unfortunate result after spending nearly a decade and tens of millions on the consumer facing portal. Objectively, their SEO rankings fall well short of competitors. Most of their organic traffic comes from people searching for Compass. Branded search is also important and they have done well there – but other than “real estate” which has trended up ahead of their IPO, it is quite lacking in the medium and shorter tail intent-based real estate terms. 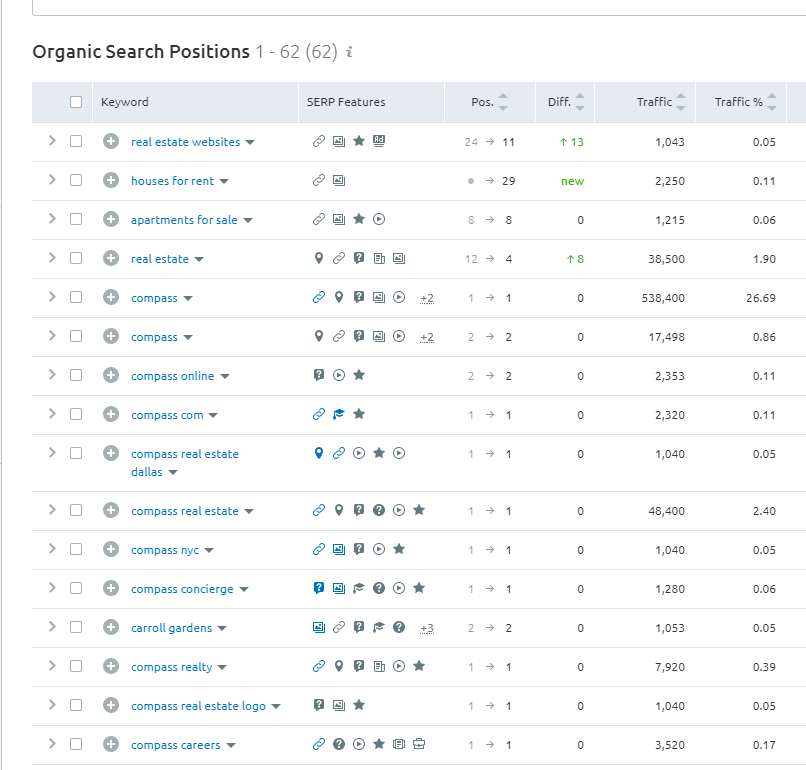 Contrast that with Redfin, which also does incredibly well in branded search, but also in many short tail, competitive terms. First, you’ll notice that the branded search is multiples of Compass in shear traffic. They also rank well in many competitive terms with clear real estate purchase intent. Redfin is also operating a brokerage, but also has a huge focus on the consumer experience. 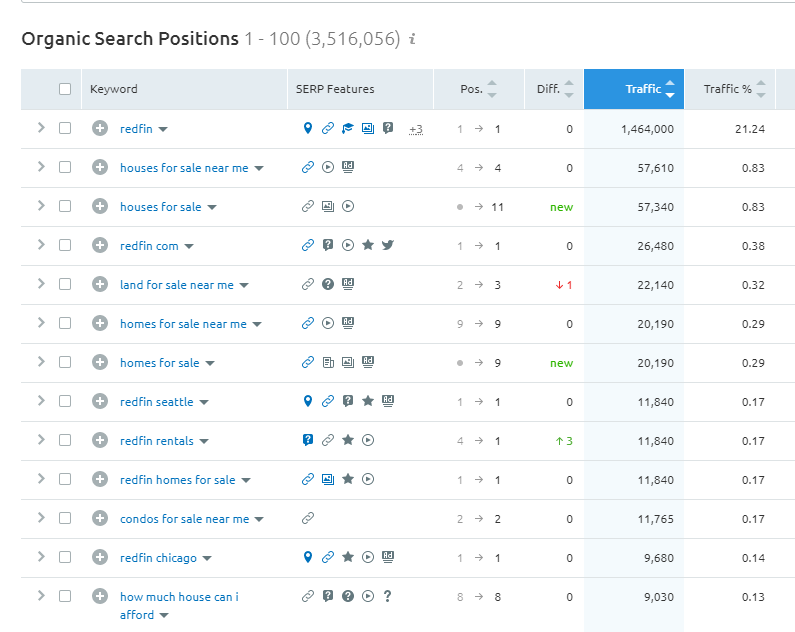 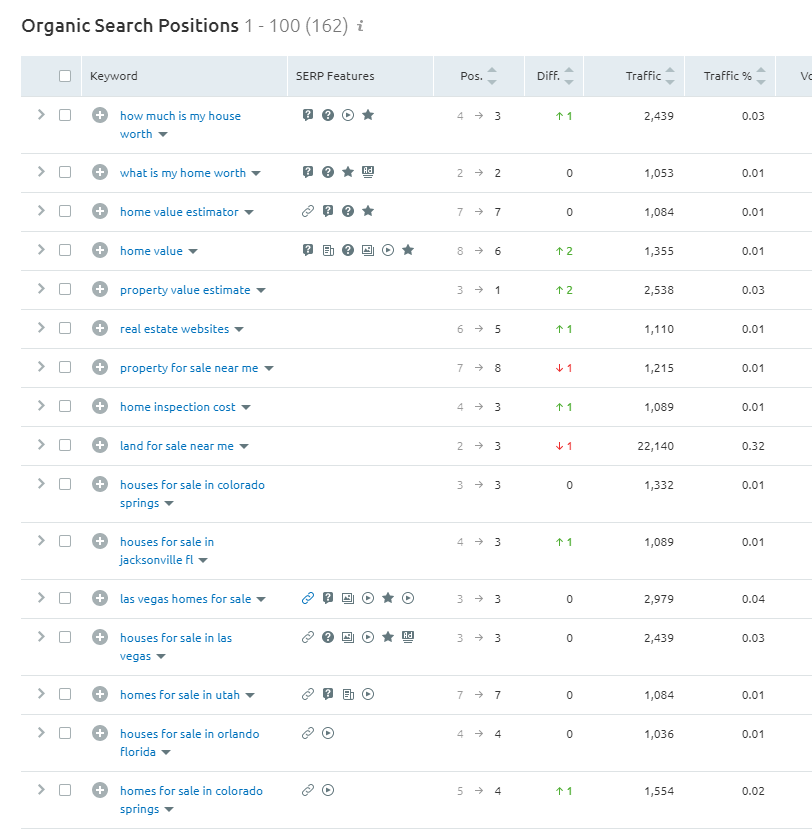 Real Estate Demand After The Pandemic?

Reffkin himself later said the pandemic might have been helpful for real estate sales in many metro areas. Covid-19 created a permanent shift in real estate demand. Everyone realized they want more space. Larger apartments, larger houses, and more room for the family and kids. RealtyHop data confirms the phenomenon. Housing prices in desirable suburbs are now above their pre-pandemic highs, with a focus on 3 bedroom and larger units.
The RentHop data has very in-depth amount of coverage in dense urban areas. New York City, Boston, Chicago, and San Francisco saw very sharp declines in rental prices throughout the pandemic lockdowns. At first, some landlords held out, hoping the sheltering-in-place would be over in a few weeks. Even then-president Trump initially declared in March 2020 that we would reopen the country by Easter. Unfortunately for city landlords, by summer it was a full-fledged fire sale. Studio and 1BR apartments were going for net effective rents lower than even the post-2008 financial crisis. Even in Easter 2021, with a third of the country vaccinated, we are still seeing a huge supply glut in Manhattan, Brooklyn, and Queens. How long will the deals last? Will companies resume their office footprints in NYC and other cities? Will they require employees to return to daily commuting, meetings, and required face time? That’s the multi-trillion-dollar question everyone is asking. Stay tuned as we continue to report on real estate re-opening trends.