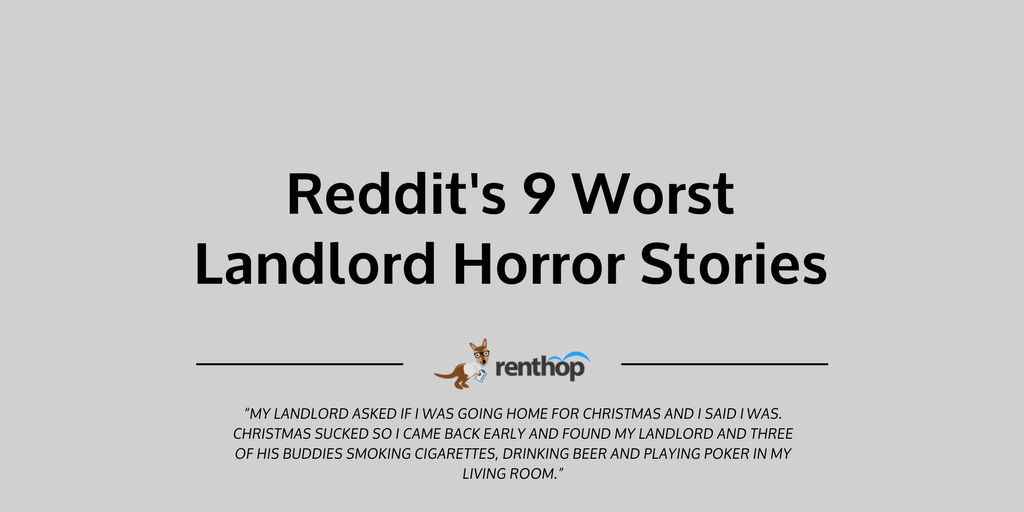 When you’re a renter, the chances of you having to deal with a lot of s*** is high. Two of the worst things to deal with are horrible roommates and landlords that just make your life a living hell. Back in January we did a compilation of Reddit’s 9 Funniest Roommate Horror Stories. We thought it was time to compile a list of Reddit’s 9 Worst Landlord Horror Stories. Hopefully your story isn’t worse than this.

“Maybe not a bad experience story, but definitely weird as hell. Lived in a duplex in Clearwater, Florida as a kid. landlord would occasionally come and ask for a forward on the payment for next months’ rent. Never knew why. Moved to Ohio to be closer to family, and the landlord showed up randomly after a couple years living there, and asked if we had any spare cash..”

“Our house had eventually got rats. Not small rats, but big city rats. our landlord didn’t do anything to fix it. Didn’t offer traps. Nothing. A few days later our dishwasher started leaking and flooded the basement. Guess what was in the water. Tons of dead rats. Our landlord didn’t get back to us for a little over a week to fix the water/dead rat problem. A landlord that doesn’t respond to a water problem = someone who doesn’t give a fuck.”

“Accidentally subletted from people who were almost middle aged–partying their asses off with every drug you can think of, excepting heroin. Worst part: they fancied themselves DJ’s and play their special music ALL night 3 times a week. And they bought themselves a stupid light disco ball and…. a special bass. You can’t get away from bass—it’s EVERYWHERE! It was incredibly horrible.”

“The landlady would constantly come by unannounced, and would just let herself in with her key, without even knocking. This was irritating, but since we had nothing to hide it was never really an issue. Until the day she brought her husband round to do some maintenance (unasked for). As all of us living there were girls, we never though twice about walking from the bathroom to our bedrooms in just a towel, and I ended up being trapped in the bathroom for half an hour (I had no intention of walking past him in a skimpy towel) while this old man fiddled with something right outside the door.”

“My landlord moved into a tent in my front yard. There was a little bungalow thing in front of the house I was renting that was not included in the lease it had electricity and water which were attached to my house. When I moved in the bungalow was full of random stuff and it was made clear that it wasn’t included in the lease and was only used for storage. One day I got home from work and there was a tent next to the bungalow. It was all very strange.”

“It was a home with an apartment in the basement. If he didn’t like my music or games I was playing he would turn the router off that was in his part of the home. It pissed me off to no end. He also let my dog out and she was picked up by animal control. $270 later I was about 5 seconds from getting into a fist fight with him when his neighbor heard us shouting and told us both to just walk away from eachother. At that moment I said i was leaving, packed everything up and was gone that night.”

“My landlord asked if I was going home for Christmas and I said it was. Christmas sucked so I came back early and found my landlord and three of his buddies smoking cigarettes, drinking beer and playing poker in my living room.”

“Well, they weren’t the actual owner, but I was sub-renting a room from a couple who rented an apartment. The couple was an Australian guy who used to be an alcoholic (had a steady job but he tended to slur his words and forget things) and a 40-something Chinese student. She would go into the toilet after every time I went and thoroughly scrub it. And then one day I came home at about 1am. I was in the kitchen making a peanut butter sandwich when I heard a noise and turned to my left. From the kitchen I could see through the lounge room into the study – all the lights in both rooms were off but I could see the Chinese woman sitting at the computer, facing me. I turned back to my sandwich, not wanting to believe she was actually there, but I turned back and now she was sitting facing the computer (which was off). I didn’t stay long after that.”

“Probably not the worst, but here goes. My wife and I moved into a small basement 1 bedroom. A couple weeks later, we start hearing something in the walls. I figure it’s just mice (pretty common here), tell the landlord, and move on. A couple weeks later, it’s definitely not mice. It’s rats. We get some big reat traps. We caught like 6 really quickly. One had it’s head eaten off. Another my wife had to kill because it was caught in the trap but not dead.

Anyway, we nope the fuck out. The landlord isn’t doing shit. I come home one day, and the landlord says he’s find a new tenant to move in we’re gone. But you know what he was doing? He was putting the rat traps back: he had hid them all so that the new tenant wouldn’t realize the problem. We had no way to contact the new person, but we sent them a letter after we moved to let them know.”