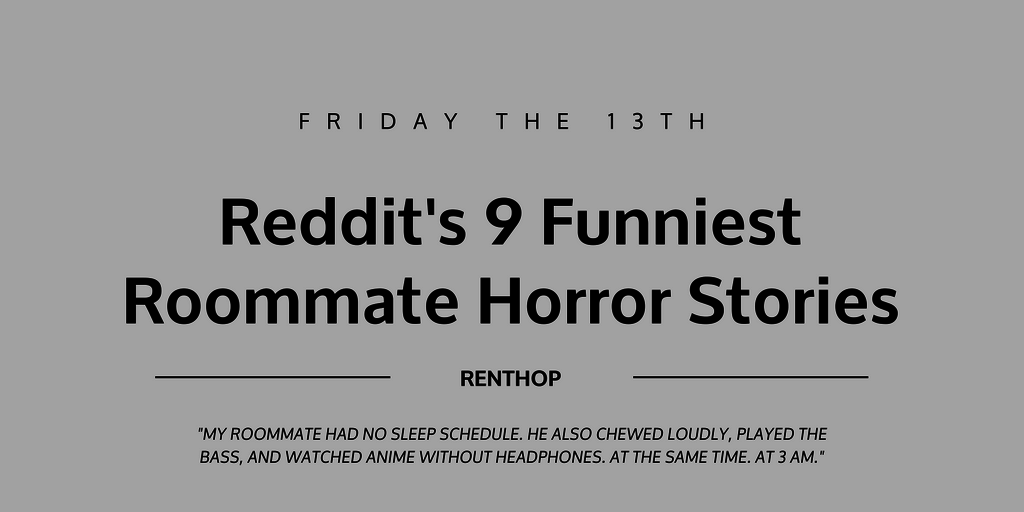 Behold, it’s Friday the 13th. We’ve been taught to fear the day as it is associated with unlucky and “scary” events. Well, nothing’s really scarier than horrible roommates is there? If you’ve ever had a bad roommate, you’re not alone. From not doing the dishes to playing music loudly when you’re sleeping, roommates can be some of the most annoying people in our lives. So that you can feel better about your own roommate, here’s a list of what we found to be Reddit’s funniest horror stories.

“I lived with a really greasy guy, very unkempt, no hygiene what so ever. He didn’t even own a toothbrush which led me to believe that he didn’t brush his teeth. I assumed this for about four months until the day I came home to my housemate brushing his teeth… with MY toothbrush.”

“He woke me up at 3am. He dropped his pants to the ground. He said “tom cruise was right about everything.” He then, with his pants still at his ankles, bunny-hopped back to his bed and fell asleep. I didn’t sleep that night.”

“She used to write down every single thing that happened to her…AND TO ME…on her public blog. I asked her to stop, she said that because I lived with her, it was her information and she would do with it as she wished. I found out later that when she would leave for days at a time (we didnt get along) she had digital cameras streaming online of what i was doing and instructed her internet friends to let her know if they saw me do anything weird. luckily she didnt have many friends, so i dont think anyone cared…”

“my roommate would get things out of the trash. like food even. then he would mix it in with his store-bought food so we learned never to “borrow” his food. this wasn’t his intention, but it was quite effective. one time he brought me back a whole bag of clothes from the trash. his mom was a teacher and would deep freeze a ton of tiny milk cartons she stole and give them to us. so sometimes we’d be drinking milk from six months ago. it required a whiff test. needless to say, he was a cheap bastard.”

“I had a roommate who absolutely refused to buy toilet paper. After weeks of her stealing ours, the other 3 of us started hiding it so she would be forced to buy her own. Instead, she started taking heaps of napkins from restaurants and stealing rolls of our paper towels. One night we all went out to dinner, came home, and the entire basement was flooded because she backed up the toilet with god only knows how much shit that shouldn’t ever be flushed. That and she would keep piles of old food laying around her room…never did laundry…most disgusting human being I’ve ever met.”

“I lived with a guy who drank rum like water and played the trumpet. But that’s just the beginning. Although he couldn’t play the trumpet. He would play the theme to “The Flintstones” but always got stuck on one note, I wanted to take a shovel to the trumpet right at the moment he would mess it up, put us both out of our misery. In addition he had a salt water fish tank. No fish could live in it because it was a green algae cesspool of filth. The smell was that of a soggy swamp sneaker in a hot gym locker. He would stand and stare at it and chuckle to himself. He also cooked pounds pounds and pounds of kale then would try and get the stalks down the garbage disposal, which alway broke it. He would wear a purple robe with no clothes on under it. Granted the guy meant no harm, he was just so annoying to live with. I still wonder to this day where he is. He went by a name other than his original so I don’t know how to find him.”

“The first night I met my freshman roommate she introduced herself and said, completely seriously “have you seen that movie where one of the roommates kills himself and the other gets a free ride? Do you think that would really happen?” She was always good at ice breakers.”

“My roommate would study all night on a completely fucked up schedule—twenty minutes studying, twenty minutes sleep, and so on. The result was her alarm going off at twenty-minute intervals all night for weeks leading up to and during finals. It’s partly my fault for being too cripplingly shy to confront her about it—we never spoke, which was terrible on its own—but how is that even an effective way to learn (or sleep)?”

“My roommate had no sleep schedule. He also chewed loudly, played the bass, and watched anime without headphones. At the same time. At 3 am.”