How Not To Die: Weight Loss Edition

We previously discussed how Paul Graham’s famous How Not To Die essay applies well to the world of NYC rental brokers. Now that renter paid broker fees disappearing (unless it’s overturned), it’s more important than ever to be both engaged and flexible. Some people will need to pivot their business models. Some will do fine as is. But the most important thing is not to panic and shut down.

The second key point in How Not To Die is to set yourself up for embarrassing failure. Although many founders begin their ventures with dreams of “having an impact” or generating great wealth, the harsh realities of the startup world are brutally demoralizing. When the going gets tough, who are the weak hands who quickly fold, citing the “fail fast” advice?

Y Combinator discovered founders are more concerned about the high embarrassment of failure than the allure of riches. Lawrence and I experienced this many times in the early RentHop days, and we nearly gave up MANY times. Octopart had a challenging start (who doesn’t?). But Andres Morey and Sam Wurzel found themselves on the cover of Newsweek with “Meet The Next billionaires” printed on their chests. PG predicted they were sure to succeed (and years later they did).

No Excuses For Failure

When you proclaim your intent loudly and proudly, there is no turning back. When you don’t, you can quietly disappear. This second mental hack of publicly declaring your intent is more actionable and effective than the first hack (to keep dedicating efforts and reporting progress). So here goes, time to put my ego on the line…

Let’s see if the trick carries over to a different venture that boasts a similar 90%-plus failure rate: weight loss. For most of my adult life, I was moderately overweight with a BMI between 28-30. When Lawrence and I tried our hand becoming NYC apartment finders, I spent hours every day walking the streets of Manhattan, climbing many walkups. I lost a lot of weight, and that’s a true story I’ve told many times.

But those first few pounds were easy to lose just by introducing some more physical activity into my life. The later portion of my weight loss wasn’t so easy. It required an actual lifestyle shift and realistic goal setting. It would eventually span 6 months and 24 pounds from 160 to 136 (the initial top weight was 170 shortly after Demo Day). 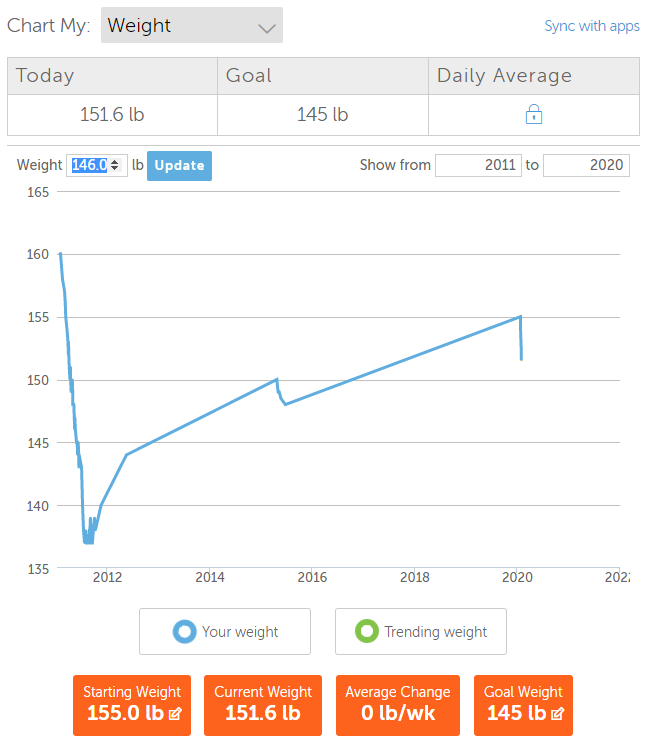 That was 2010 and 2011, and unfortunately 9 years later, I’m married and creeping back up at alarming rate! The goal is to drop to 145 by April 18th, the date of a planned Carnival cruise (whether we take it is another matter, given all the coronavirus quarantines). That requires 0.5 pounds per week, or an average 250 calorie deficit per day for the next 9 weeks. If that works out, another 10 weeks brings me down to 140 by July 4th weekend!