What Are Two-Up Two-Down Apartments?

Like the Manhattan Classic Six, there is a particular floorplan jargon that is extremely common in prewar London. It’s called the Two-Up, Two-Down row house. It refers to having no neighbors above and below you, but almost always neighbors on your two sides. If you are lucky enough to have the end-unit, meaning you are the last apartment on the block, you might only have one neighbor.

What Makes Two Up Two Down So Special?

The interior floorplan is almost always identical. There are two rooms downstairs (living room and kitchen), and two rooms upstairs (both bedrooms). The most classic layout would only have these four rooms, and each room spans the entire width of the apartment. And while the layout seems simple, there is a brilliant engineering reason behind it.

The heating efficiency is one of the biggest benefits to Two-Up Two-Down apartments. London winters are cold, and in the pre-war days maintaining ample heating was a common problem. The chimney and fireplaces became essential heating conduits, but to carve a chimney for each unit would drastically reduce the number of parcels per lot and block. However, as you can see from the layout below, row houses can be lined up so that four fireplaces all share one massive chimney!

That’s why in the photo above, you can see four separate spigots in each chimney. One from the living room fireplace, one from the dining room, and then another two from your neighbor who has a mirror image of your floorplan! 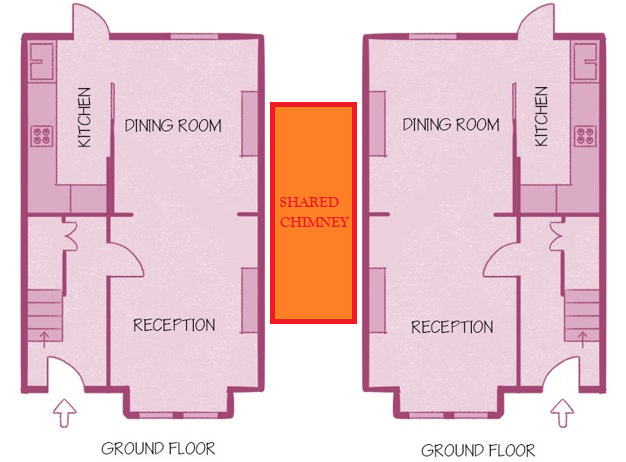 In more modern times, people flex the large kitchen into a separate dining area, and one of the bedrooms will be smaller and contain a bathroom. Some call those three-up, three-down, but they are not actually larger, just more functional.

In the New York apartment world, adding walls for functionality is already wide-spread, known as flexing or converting, but should not diverge significantly in pricing from the original layout versions (having no bathroom at all is a big deal, of course, but we aren’t talking about plumbing changes, only walls).

Rowhouses and townhouses are much more rare in New York City, because most of us are not so lucky to have only one or two neighbors. It’s much more common to have four – one on each side, one above you, and one below you! They do exist, of course – other than ultra luxury townhouses in Manhattan, you can search RealtyHop for some reasonably priced townhouses for sale in Queens and Brooklyn. If you ever browse one during an open house, pay special attention to the architecture and how it lines up shared components with any neighboring units. You might just find creative engineering solutions, like the one we see in the Two-Up Two-Down model.