The previous study analyzed individual donations in the 30 most populous U.S. cities. This time around we took a deeper look at the individual donations on a region, city, and zip code level, including the Bay Area. We chose specifically to rank zip codes by unique donor counts instead of dollar amounts, as we feel this better represents how many people support each candidate.

The interactive map below highlights the Bay Area and its zip codes. More detailed, the map shows where each zip code stands, politically, and which presidential candidate is the frontrunner in each zip code. By clicking on the zip code or selecting from the drop-down menu, you will get more information on which candidate is the front runner and which candidate raised the most money in donations in that specific zip code. For a more detailed analysis of how each candidate is doing in the same zip code, view the corresponding interactive line graph above the map.

When taking a closer look at the corresponding interactive line graph above the map, we see that Bernie Sanders is in the lead in terms of the total number of unique donors. As of September 30th, Sanders had 4,581 unique donors in the Bay Area. Kamala Harris ended up with 4,498 unique donors, while Elizabeth Warren attracted 3,781 unique donors.

Following the fundraising data is a good way to get insight into where each candidate stands in the rase as donations equal support. Instead of tracking the dollar amount raised by each candidate, we analyze the unique donor count, as it better represents the number of individual voters each candidate attracts. We’ve therefore put together a line graph that shows each candidate’s progress. 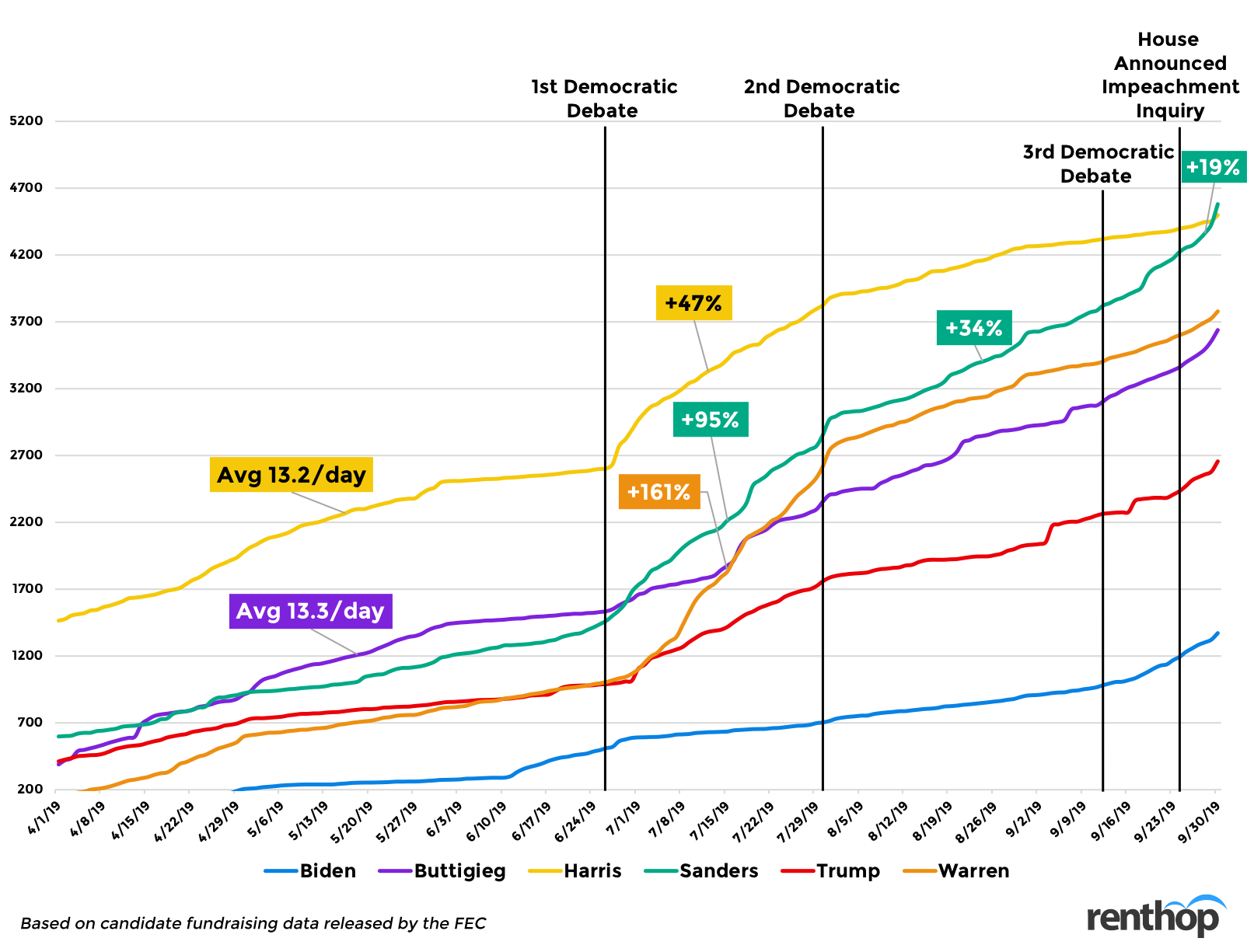 Donald Trump, meanwhile, has seen a consistent inflow of unique donations since April, but nothing as major as the Harris, Warren, Sanders, or Buttigieg. This is not surprising as all eyes are on the Democratic Primary now. However, the dynamic will most likely change once we get closer to the General election. What’s interesting, though, is that the amount of support Trump received actually went up after the whistle-blower complaint came out.

The interactive chart below compares the top five democratic candidates to the average number of unique donors amongst the group.

We thought we would break down the donations by area in addition to zip codes to better understand residents’ views. You can also select the areas from the drop-down menu on the map to learn more.