Back in July, our sister site RealtyHop took a look at the presidential candidates’ filed fundraising numbers for the second quarter. We then stated, by looking at the numbers (and numbers don’t lie), that based on the fundraising numbers only five of the Democratic presidential candidates truly had a shot. As the campaign finance data for the third quarter has now been released, we can take another close look to see if the trend has changed.

The previous study analyzed individual donations in the 30 most populous U.S. cities. This time around we took a deeper look at the individual donations on a state, county, and zip code level, including Massachusetts. We chose specifically to rank zip codes by unique donor counts instead of dollar amounts, as we feel this better represents how many people support each candidate.

The interactive map and graph below show the share of unique donors each of the top 10 candidates has in zip codes across Massachusetts. More detailed, the map shows where each zip code stands, politically, and which presidential candidate is the front-runner in each zip code. In terms of the color shades, purple areas are whether neither the 19 Democratic candidates combined nor Trump has more than 55% of the donors. Light blue and light red represent zip codes where the party has 55% to 70% of the donors, and blue or red represents a majority of 70% and more.

When taking a closer look at the corresponding interactive line graph above the map, we see that Elizabeth Warren is in the lead in terms of the total number of unique donors. As of September 30th, Warren had drawn 4,398 unique donors in Massachusetts. Donald Trump comes in second with a total of 2,863 unique donors, just 55 unique donations ahead of Bernie Sanders who ended up with 2,808 unique donors.

Following the fundraising data is a good way to get insight into where each candidate stands with the public as donations equal support. Unique donor counts also better represent how many people support each candidate. We’ve therefore put together a line graph that shows each candidate’s progress. 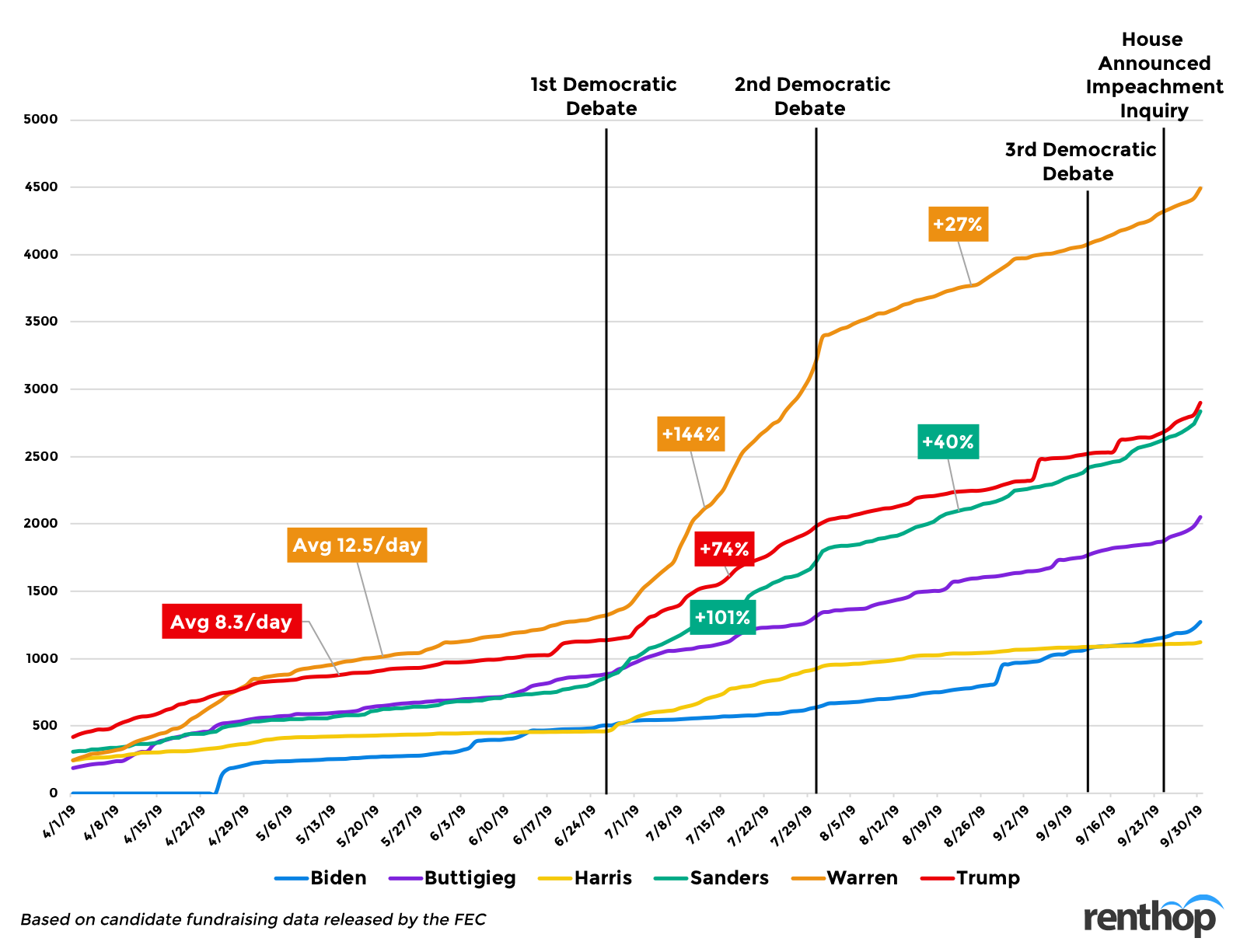 We also see that Warren’s fundraising effort further resulted in more unique donors, 27%, after the second Democratic debate. Sanders, meanwhile, started gaining momentum, and his unique donor count jumped by an additional 40%. While Sanders and Trump both have attracted thousands of unique donors, it is clear from the data that Warren is the winner in terms of the total number of unique donors.

The interactive chart below compares the top five Democratic candidates to the average number of unique donors amongst the group.

Senator Harris and Vice President Biden have both consistently recorded below-average performance since April. Biden hit the lowest point in July with 85% below average, while Harris’ lowest point was in September with an 85% below-average unique donor count as well. Both candidates have not yet seen any above-average numbers. From the interactive chart we also see that Buttigieg had a rocky road in Massachusetts, with a range of above and below-average numbers from April to September, but nothing drastic.

We thought we would break down the campaign finance data by county in addition to zip codes to better understand the political scene in Massachusetts. You can also select the areas from the drop-down menu on the map to learn more.

The campaign donations data was retrieved from the FEC, and the city shapefiles were retrieved from the Census website. To calculate unique donors, we combed through over 80,000 recorded campaign donations, looking at donor names, committees, receipt dates, and 5-digit zip codes. We then grouped donations from the same name and zip code together and analyzed the data by zip code and candidate. In Massachusetts, we found over 16,500 unique donors as of Q3 2019.