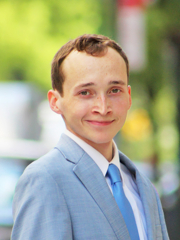 (929) 930-3907
Agent Profile
Every Home has a Buyer, and Every Buyer has a Home. Matthew has always had a passion for people! Originally from the suburbs of Atlanta, Georgia; he fell in love with acting at an early age. He went on to pursue a degree & career in the theatre and quickly began performing at professional venues around the country. However, he dreamed of living in "The Big City" since he was 14 years old... a dream that a little over a decade later would become a reality! Today, he has settled into his dream city and finds great pleasure in helping others make this lifestyle a reality as well. He likes to think of himself as a "Home Matchmaker" of sorts to his clients! Really listening to what they dream their life to look like, and presenting several versions of that life for them to choose from!

During his free time Matthew enjoys exploring the various NYC neighborhoods (and their latest tiktok eats!), playing the latest nintendo switch game, attending drag brunch with his friends, attempting to bake/cook from his Julia Child's cookbook, searching for greenspaces, and enjoying the NYC nightlife & entertainment scenes! His goal is to open up his own original entertainment and dining venues here in the city.