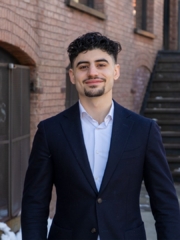 1 Renter Review
Agent Profile
Jullian is a first generation immigrant born and raised in Plainview, Long Island. His family from Tel Aviv - are all entrepreneurs. Following in their footsteps Jullian studied Computer Science and founded his own Ecommerce business with his brother when he was only 15. One of his great passions is music. He even DJs at a few venues in his free time. He also loves spending time with his Yorkie Shoco. His goal of becoming a landlord was realized in September of 2021 when he purchased his first property in Long Island that he also manages. This experience has given him great insight and expertise into working with investors. Jullian has stepped away from Ecommerce and is now fully focused on developing his real estate career in this vibrant NYC market.


After living in the Financial District, Jullian became an expert in both the FiDi, Battery Park and  Tribeca markets.  He has also done transactions in Murray Hill/Midtown East, East Village, the Upper East Side, and Chelsea! Since starting in the Williamsburg office, Jullian has become familiar with many of Brooklyn's hottest neighborhoods including Williamsburg, Greenpoint, Downtown Brooklyn, Prospect Heights, and Boerum Hill!  If you'd like to view some of his favorite listings check him out on TikTok (@Jullian.Avgi) where he has amassed 10,000 followers!