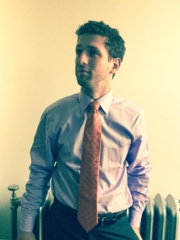 4 Renter Reviews
Agent Profile
Coming from a retail background, Dominic previously managed teams of employees ranging from 10-100 in Walgreens for 5 years, across the United States, in stores with various sales volume tiers. From a small neighborhood store in Louisville, Kentucky --- all the way to being part of the management team at the Walgreens in the Empire State Building, Dominic has helped all kinds of people.

Prior to that, he was Onsite Property Manager for a small 32-unit building in his hometown of Milwaukee, WI. Much of the duties there were identical in the leasing aspect, but with a bit more focus on day-to-day maintenance and operations. This is where the foundation of his real estate curiosity and passion had been laid in earnest.

Wanting to escape the mundane confines of the midwest, Dominic opted to accept nothing less than the best in terms of experiences that this country had to offer -- NYC life, and all that came with it.

Now, he makes every attempt that he can to merge his passion for helping people, with his passion for real estate! Neighborhood Expertise: Ridgewood, Crown Heights, Bedford-Stuyvesant Languages Spoken: English
Reviews
Dominic was super flexible with a last minute viewing time for the apartment that I ultimately moved into. Provided all sign-on docs that I needed as soon as he could and generally made the rental process a breeze! I highly recommend working with this guy.
Ian, July 2022
Dominic was extremely helpful, responsive, and professional. He provided all correspondence in a thorough and timely manner. He was supportive in working through my lease agreement and connecting with me the necessary contacts for my new building. I would definitely work with him in the future.
Logan, June 2022
Dominic was excellent in helping me find and secure my new apy. I highly recco using him!
Nicole, April 2022
EXR helped me lease a beautiful, affordable apartment in NYC that feels too good to be true . I was very fortunate to work with Dominic who walked me through every step of the process and made it as easy as possible. I could not recommend Dominic and EXR more - I still cannot believe my luck. 11/10.
Elsa, September 2021
Check Availability
Please verify your phone/email
Enter the 6-digit code sent to or download the RentHop mobile app to continue.
Apartments for Rent in Top Cities
Atlanta Apartments
Austin Apartments
Baltimore Apartments
Boston Apartments
Chicago Apartments
Dallas Apartments
Denver Apartments
Detroit Apartments
Houston Apartments
Indianapolis Apartments
Las Vegas Apartments
Los Angeles Apartments
Miami Apartments
Minneapolis Apartments
Nashville Apartments
New York City Apartments
Orlando Apartments
Philadelphia Apartments
Phoenix Apartments
San Antonio Apartments
San Diego Apartments
San Francisco Apartments
Seattle Apartments
Washington DC Apartments
Company
About
Press
Terms
Privacy
Do Not Share or
Sell My Personal
Info
California Privacy Notice
Renters
Find Elite Agents
Renter's Guide
Help and Answers
Blog
Rent Calculator
Discover
Research and Studies
Stats and Trends
Mobile App
Popular Areas
CitySignal
Join Us
Advertise on RentHop
Plans and Pricing
Jobs - We're Hiring!