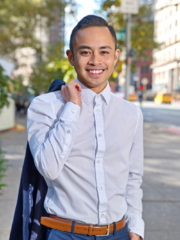 (310) 892-8918
Agent Profile
Mark was born and raised in Los Angeles, California. After two months of traveling around Europe and Canada, he was inspired to embark on one more big adventure. Feeling like he had the world at his feet, he decided to turn a long-time dream into reality - and that's when he booked his one-way ticket to New York City.

After spending almost a decade in the hospitality industry, Mark decided it was time to switch gears. He wanted to do something exciting and rewarding, while also utilizing the interpersonal skills he developed from working in food and beverage. So, he opened the door to real estate.

As a licensed salesperson at REAL New York, Mark will help his clients navigate the robust market that is New York rentals. Most importantly, he will help his clients find their oasis in this manic concrete jungle. When Mark moved to New York, he realized that this city is a different beast - it's highly competitive and incredibly fast-paced. He understands the unique challenges that come with renting in New York, especially when moving from out-of-state, but he knows the right agent can help mitigate that stress.

Mark graduated from San Francisco State University with a Bachelor of Science in Kinesiology. He hopes to one day attend graduate school for architecture. His hobbies include camping, hiking, sitting on a park bench with a good book, and attempting to keep his plants alive.