Are Y Combinator Demo Day Valuations Too High? Or is the Market Efficient?

For the mid stage bucket, he wins easily. It’s not even close. The official bet was that a basket of 9 “mid stage” YC companies, most early unicorns or close to it, would eventually triple in aggregate value. Out of the 9 companies, at least three single-handedly meet the valuation requirement for the entire group. At every point in the 5-year bet, this handful of companies always looked solidly ahead of their 2015 valuations, and solidly ahead of the already very strong S&P and Nasdaq returns during the period. 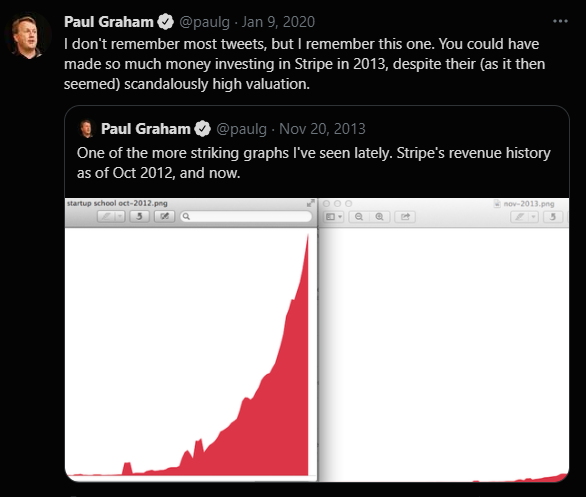 Not all of the companies had completely smooth sailing. The most volatile was Zenefits, which shortly after hitting $4Bn in mid 2015 saw management change and faced allegations of securities fraud from some of the VCs (the VCs eventually got a better valuation). Others didn’t have any particular incidents; they may have just slowed their growth. However, when one company stumbled, the others more than made up the difference.

Draw the bet out one more year, and things look even better for the YC alumni. Stripe, Coinbase, and Instacart have private valuations adding up to over $200 Bn, giving the entire basket a 10x-20x return (some dilution along the way).

The late stage bucket initially underperformed, but by 2021 pulled ahead. Technically, Sam loses the bet. On Jan 1st, 2020, Uber and Lyft had IPOed with mixed results. Several other companies had lackluster IPOs relative to their latest private valuations, or were delaying their IPOs. Airbnb was still rapidly growing pre-Covid, but they were not large enough to carry the remaining 5. The original bet was that the 6 companies, worth $100 Bn in 2015, would double by 2020.

Of course, by 2021 the tides completely turned. Uber, Airbnb, Pinterest, DropBox, and Palantir all have public valuations. Their total market cap trounces the target. You don’t even need SpaceX, which more than holds its 1/6 share of the $200 Bn burdens. Was Sam’s time horizon too short by one year? Or did we catch a new bubble? Reasonable people can disagree.

Most interesting is the third bucket, because the bet originally stemmed from angel and seed investors claiming there was a valuation bubble in the early stages. Even Sam’s post states “the thing that feels least reasonable is some early-stage valuations“, a very candid assessment coming from the president of YC at the time! Bubble alarms were going off at least two years prior, with terms like the “Series A Crunch” making headlines (seed funding was growing exponentially; Series A deals, not so much). A SAFE with a valuation cap of $8M at Demo Day seemed too high.

From the Fenwick Series A Crunch report

Some investors even pointed to the invention of the SAFE as evidence of the bubble. YC invented and published the SAFE, with advice from Wilson Sonsini, in late 2013 with the 2014 batches being the first to widely use them. They replace the older style of using convertible debt notes and fix at least three very important and annoying problems. Convertibles count as debt on the balance sheet, they have interest, and they have a maturity date. All 3 are undesirable to the founders, and honestly, not particularly useful to investors. But somehow, SAFEs became a hot issue with people claiming YC was intentionally flexing muscles and taking many important protections away from investors.

These squabbles seem quaint with the benefit of hindsight. The last thing either side wants to spend time on is the awkward auto-conversion process of a convertible note. Plus, most convertible notes gave investors the worst possible conversion price if the company hadn’t raised by the maturity date. The original era of the Series A Crunch, say 2012-2014, saw many startups and investors scrambling to extend the notes, hopefully without incurring more legal fees than the actual interest on the debt.

Would investing $10K into every W15 company at the Demo Day valuation deliver a decent return? With 114 companies in W15, you’d be ahead on paper. As expected, a small handful of stars carry the portfolio. You can find them on the list of Top YC Companies (RentHop and RealtyHop making baby steps). Is it fair to say the top W15 company is a 200x return?

For most people who grumble about valuations, the most common response is the valuation doesn’t matter. All that matters is that you get into the next home run of a deal. When it returns 200x or 1000x, it won’t matter if you paid at a $10M, $20M, or $30M cap.

What do we think about a 2021 version of the challenge? Yesterday, YC held the Winter 2021 batch Alumni Demo Day. Would a fund that can somehow put $10K into every graduating company come out ahead? We are up to 323 graduating companies with valuations considerably higher than 2015. If three companies reach unicorn valuations, is that enough? Is 1000x achievable on an uncapped discounted SAFE or high cap SAFE?

In my limited angel investing experience (I’m a nobody who gets zero special treatment), if you look at the “YC Top Companies” list and your investment is somewhere in 50-100+ rank, the return is 5x-15x on paper (hopefully more, eventually). For deals in the top 50, the return is case-by-case, but always lower than the latest valuation divided by the cap at demo day. Usually 1/3 to 2/3 lower, due to interim dilution.

Where does the dilution come from? For one, you almost always read a about pre-money valuations, which makes perfect sense. Pre-money valuation is the way to quote the company valuation so that the eventual size of the round does not impact the price per share. However, with each round, all of the existing investors are crammed down about 20-25%. Some investors exercise their pro rata, some do not (angels often do not and it makes perfect sense).

Before anyone gets the wrong idea, I don’t intend to stir up trouble. My entire angel portfolio consists of YC companies and I have been very fortunate. Also, the market clearly agrees with Demo Day valuations given the huge demand. However, the binary 1000x argument no longer holds. You might not actually get 1000x, even if you find the best company in the batch. And what is your expected value? Not every batch has a 1000 bagger or even 100 bagger. And if you find one, you also need to convince them to accept your money!

Some Context from the OG Crew

RentHop launched out of the Summer 2009 batch of Y Combinator as the Smarter Apartment Search (aka, Sublet Your Apartment without Craigslist or Broker Fees). The deal was $15K for 6% of the company. It was an amazing deal and we would not have succeeded without all the help and support from the YC partners, network, and community over the years. Our demo day valuation was a convertible note at $1.25M valuation cap with 6% interest. Not long afterward, all of the seed notes eventually converted at a $10M valuation. To this day, our growth continues, and I want to thank everyone who has supported us all these years. We hope everyone eventually gets their many-X return.

After some interesting reactions to this original post, there exist some important clarifications to make.

Sam Altman did formally concede the bet in early 2020, with a tweet.  He says he loses according to the terms he created, but in many ways wins in spirit.  It’s easy to see what he means.  So many were calling for a huge bubble bursting sometime in 2016 to 2020, led by a massive series A crunch or spectacular failure of some unicorns gone bad.  What actually happened?

One explanation, the startups in the latest stage bucket simply needed more time to find an IPO window.   Note that Sam picked 6 companies that truly abide by the first Y Combinator core principle – make something people want.   No one disputes we need an effective way to collaborate online and share files between devices and people.  Or that a marketplace for matching short-term rental guests with hosts of any size creates wealth.  Most people can easily make an effective case for all 6, with SpaceX clearly the most moonshot play of the basket (and hence the last to IPO).

Perhaps one thing Sam and others didn’t foresee was a tendency for companies to stay private for longer.  Clearly there is a need to pick a concrete date for settling the bet.  Most investors are told to wait 5-7 years to see an exit on their venture investments.  For the early and mid-stage deals, Sam could count on stepped up valuations from private rounds.  As discussed, he got those in the mid-stage bucket easily.  For the late-stage deals, most with post-unicorn valuations,  the most obvious stepped up valuation comes in an IPO.  But those IPOs didn’t happen in time.

Is something going on here?  By any financial metrics, several late-stage Y Combinator companies seem to delay their IPOs longer than usual.  DropBox and Box certainly have nuanced differences, but many were surprised DropBox waited 3 years after the Box IPO despite having comparable metrics.  Ultimately, DropBox received a much higher valuation at IPO and to this day has about 3x the market cap.   Maybe staying private for longer is simply desirable by company management, an excellent topic that deserves its own writeup.